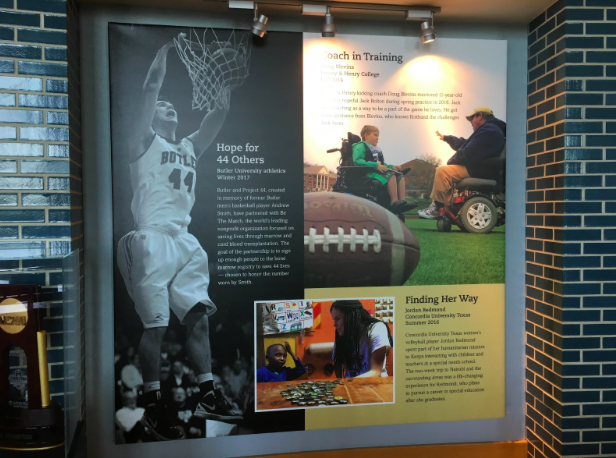 The Andrew Smith display at the NCAA Hall of Champion. Photo by Josh Mullenix

Inside the NCAA Hall of Champions, past the stone linemen standing in formation and up the stairs, a wall displays a handful of NCAA athletes that have had an impact in ways that extend far beyond the field of play.

This showcase, called Playing It Forward, ranges from Southern Mississippi student-athletes walking the streets of Hattiesburg, Mississippi, cleaning up the destruction of a tornado, to a Wisconsin Badger ice hockey player who traveled all the way to Kenya to teach women about health care and ended up creating a multi-village soccer league.

Right in the middle of the exhibit is a familiar face to the Butler community and the Indianapolis community. A face that belongs right along all of the other athletes on the wall. Andrew Smith, a Butler legend, jumping toward the rafters in Hinkle Fieldhouse to throw down a two-handed dunk.

In our newest exhibit learn how @ButlerMBB is making a difference off the field, in honor of Andrew Smith. #Project44 #PlayItForward pic.twitter.com/cRbwFjYfdl

“We wanted to do an exhibit about community service,” Kelly Dodds, assistant director of the Hall of Champions said. “All the different things that student athletes are doing is amazing to me. They are in the classroom trying to keep grades up and get an education and get to practice but they still find time to do this.”

Smith played on both of Butler’s Final Four teams in 2010 and 2011. In 2010, Smith and his teammates found themselves playing for a National Championship five miles away from historic Hinkle Fieldhouse. He improved over his years playing at Butler by averaging more points and more rebounds each year he wore a Butler uniform.

Smith’s basketball career ended when he was diagnosed with cancer in January 2014. The cancer ultimately took his life on Jan. 12, 2016.

But Smith is a Butler legend because of the way he faced T-cell lymphoblastic lymphoma with grace and selflessness.

“He went from being a top athlete to a sick man,” Samantha Smith, Andrew’s high school sweetheart and wife, said. “Instead of being pessimistic and being all about him, he made it about others. This is a guy that was selfless to the core and that is something we can all be better about. The world would be a better place if we all lived a little more like Andrew.”

Andrew Smith’s attitude toward tackling cancer resulted in Project 44. Butler and Project 44 have partnered with Be the Match, a nonprofit focused on saving lives through marrow and cord blood transplantation with the goal to sign up enough people to save 44 lives — the same number Andrew Smith wore on the court.

“Our student athletes do so many amazing things,” Dodds said. “Andrew Smith was an amazing young man and to see Butler carrying that over truly helps his legacy to grow on.”

The exhibit on the second floor at the Hall of Champions is filled with bright colors and great pictures, but the heart of the exhibit showcases the time that student-athletes take to give back to their communities.

Smith, Butler and the other NCAA athletes that make a difference off the playing field will be on display in the Hall of Champions until Oct. 31.