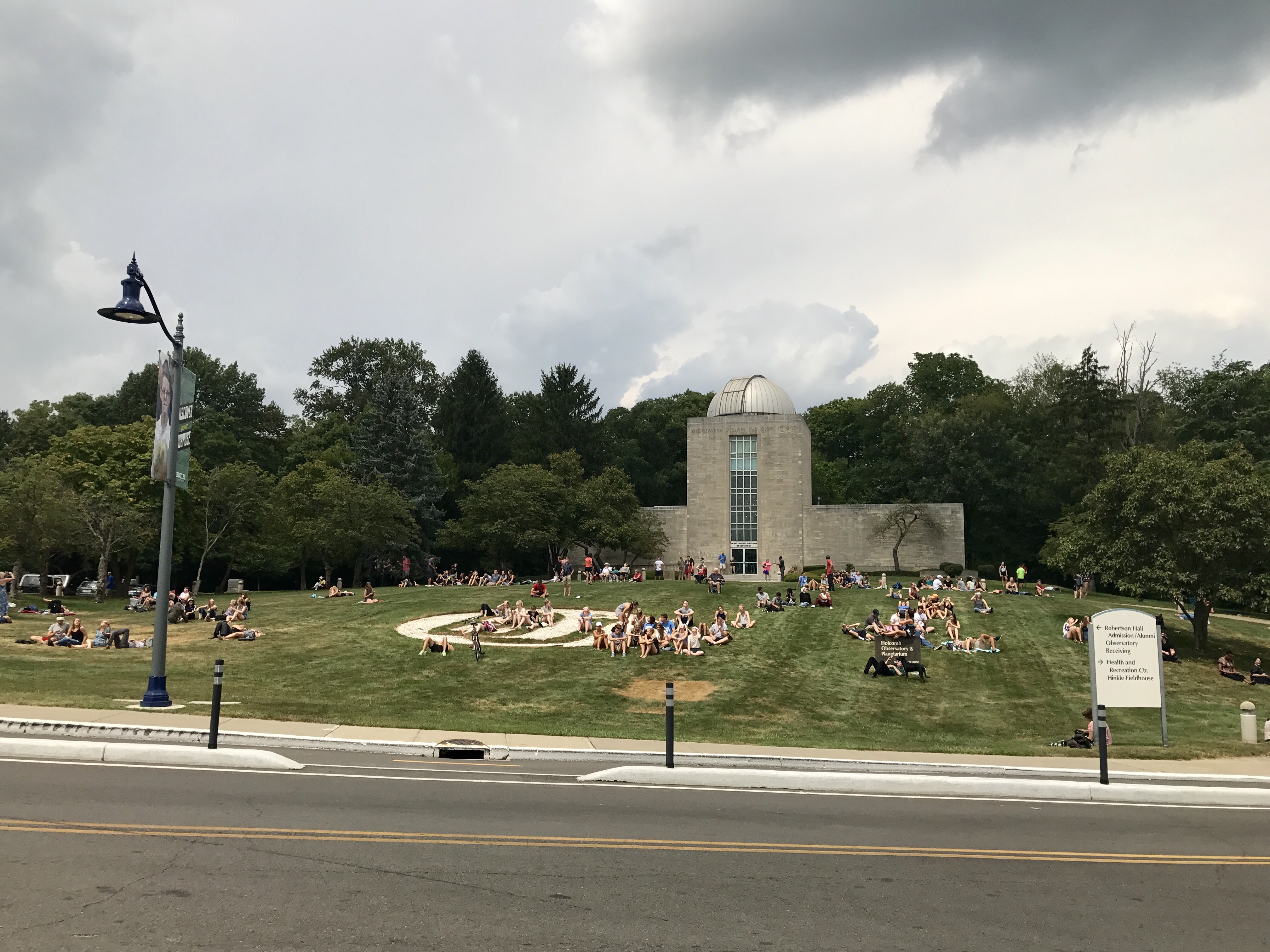 Viewers relax on the hill in front of the Holcomb Observatory as they watch the solar eclipse. Photo by Zach Horrall.

The 2017 solar eclipse panned across the cloudy Hoosier sky Aug. 21, allowing viewers a spotty look at what some call a once-in-a-lifetime experience where the moon passes in front of the sun, momentarily taking away light from earth.

The solar eclipse in near totality as seen through a special sense taken by a group of Butler students and faculty. Photo courtesy of Xianming Han.

The eclipse began for central Indiana at approximately 12:57 p.m., according to Butler University’s Holcomb Observatory and Planetarium website, and it was most covered at 2:25 p.m.

This time around, Indianapolis experienced a partial eclipse, where only part of the sun was covered by the moon. Elsewhere in the country, a total eclipse was experienced in which the moon completely covered the sun.

“In 30 seconds, it goes from daylight to twilight, and for two minutes you have that twilight,” Brian Murphy, a physics and astronomy professor at Butler and director of the Holcomb Observatory, explained regarding a total solar eclipse.

Butler had two sites available for viewing the eclipse: the Holcomb Observatory and the lawn outside Clowes Hall. Both areas were filled with students, faculty, alumni and Indianapolis residents waiting to see the phenomenon.

But, a cloudy day turned hazy as the restriction of sunlight from the moon allowed for only intermittent views of the eclipse. Those viewing outside of Clowes were heard gasping upon first seeing the eclipse through special glasses, then groaning when the clouds hampered their view, and then cheering when the clouds moved and allowed for them to see the moon-covered sun yet again.

“I thought it was just going to be cloud watching at first because you couldn’t see anything,” Katie Kruse, who graduated from Butler’s Physician’s Assistant program in May, said. “Then [the sky] opened up a little bit. I knew when to put my glasses on because I could hear people gasp or say, ‘Oh, look!’ so they did the job for me.”

Although the clouds made the sun pop in and out of the sky, there was still something to experience. Jane Surges, a faculty member of the Lacy School of Business, said the cloud cover that came near the end of the maximum coverage left her wanting more.

“At the very end, it covered completely and it was like, ‘Oh! More, more!’” Surges said. “But I would say it did not interrupt my experience, but just that there was more [clouds] at the end, where it’s like, ‘Oh, no. There’s another couple minutes here.’”

Sawyer Benge, a first-year sports media major, said he was excited to see the rare occurrence.

Surges, a former resident of Helena, Montana, said this was her second time experiencing an eclipse, with the first being in 1978.

She said she doesn’t remember much of the 1978 eclipse, but she did keep a journal of what she saw that day. Surges is planning to journal what she saw today, too.

Murphy and several students traveled to Kentucky to witness the moon completely cover the sun. This was Murphy’s third time seeing a total eclipse. He traveled to Canada and Vietnam in the late 1970s to see them.

In preparation for the eclipse, the Holcomb Observatory was in full force, preparing shows and selling glasses.

The observatory offered pre-eclipse shows Aug. 17-19. On the first day, the observatory scheduled two shows in the planetarium. But a huge demand forced them to increase their capacity to four shows, and even then, they sold out and had to turn people away.

Crescent-shaped shadows on the sidewalks of Butler University. Photo by Zach Horrall

Also, the observatory sold eclipse glasses for $2 in the days leading up to the event, and the university handed them out during the viewing parties on Aug. 21.

At one point, the observatory was selling 1,000 glasses per hour, Murphy said.

But the glasses weren’t necessarily needed, as the crescent-shaped sun could be seen through a thin layer of clouds at times, and at other times its shadow was cast on the sidewalks.

For some, it offered a chance for peace and togetherness in a world filling more and more with hate and anger.

“From a physiological perspective, I always welcome those moments of just quiet that wash over me, and I did feel that,” Surges said. “I hadn’t thought about it happening, but yeah, it’s one of those where life is sometimes running so quickly and we have so much going on, and this is like this beautiful, quiet moment to share with so many on campus. It was absolutely wonderful and creates a great pause.”

On April 8, 2024, Indianapolis will experience a total eclipse for the first time in 819 years.