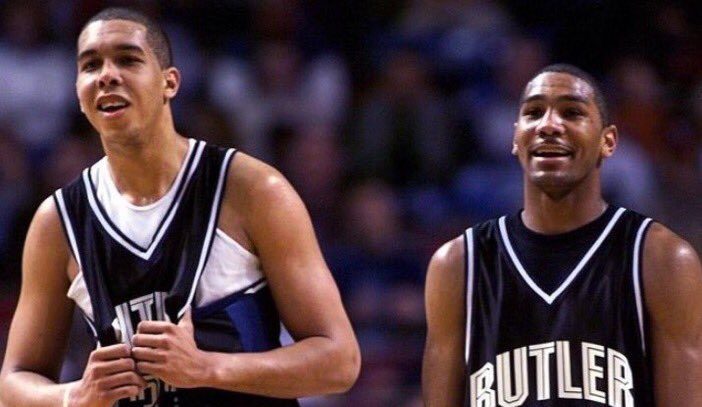 From left, Joel Cornette and LaVall Jordan during a Butler basketball game. Photo from Butler Athletics.

Let’s get it rolling excited to have @LaVall_Jordan as our new coach ?? #️⃣Year4

Let’s get to work ! Excited to get this journey going as we prepare for next year ! #GoDawgs ??

One look @LaVall_Jordan avatar and I feel pretty good about the day that today was.

Very happy for a great guy and one of my favorite Bulldogs of all-time! Joel Cornette is all smiles in heaven tonight! https://t.co/HiIkh1qJFj

Hey @19nine_threads can we get some #LAVALLIN shirts made up?

Congrats to @LaVall_Jordan he was great to cover when he played for #Butler! https://t.co/sIDf5HidP7

I’m guilty of it too, reading it too fast but thats LaVall Jordan the new Butler coach. Not Lavar ball. You may now exhale Butler fans.

The Butler Way: bigger than one coach, one player. But you already knew that, @LaVall_Jordan. Excited to watch your squad get to work. https://t.co/KqwzhkXDls

The fact that this pic pops up with the release is special. JC is absolutely smiling from above today. https://t.co/tbnPk392rO

My former classmate. Welcome back, @LaVall_Jordan! See ya around Hinkle. #GoDawgs https://t.co/uH3kTQ3WQB

This is going to be fun. Let’s get to work! #GoDawgs https://t.co/MLxaPHFwFu

So happy to have @LaVall_Jordan at Butler 🙂 #godawgs

I’m sure he’s the right guy. Hope someone stays there finally

For the last decade @ButlerMBB has been an elite program. I’m excited to see that continue and get better under @LaVall_Jordan! #GoDawgs