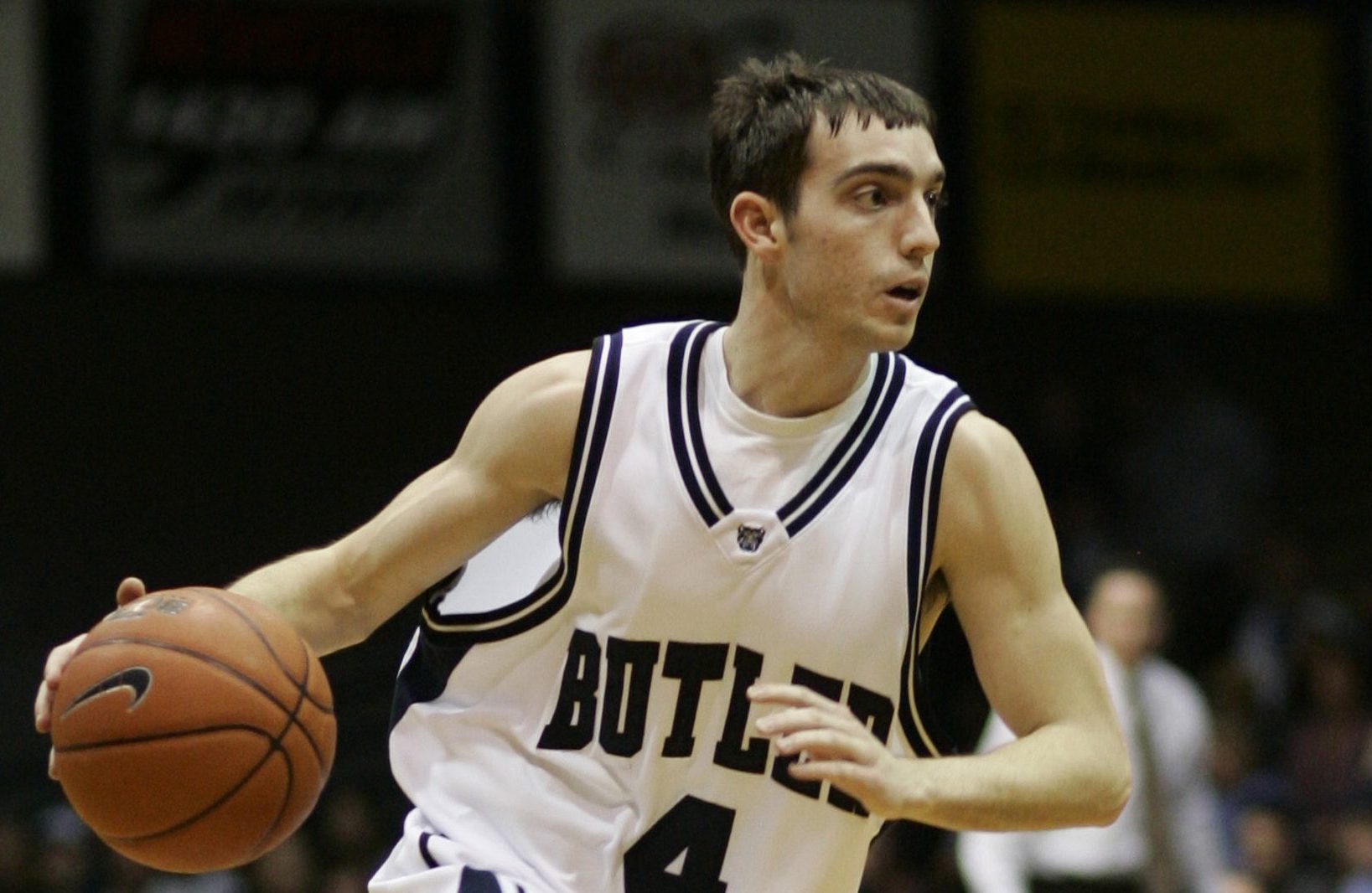 A.J. Graves watched from Butler’s bench as the game clock cast off the final seconds of his collegiate basketball career. There was nothing left but to pack up and go home, one game short of the Sweet Sixteen.

Media members lingered, rewriting game recaps after No. 7 Butler stole their first lead in overtime before falling to No. 2 University of Tennessee, 76-71. Reporters recorded postgame quotes, keystrokes transcribing the final minutes of Brad Steven’s first year as Butler’s head coach and Graves’s last as a player in 2008.

It was Graves’s one-and-one from the free throw line that tied the score at 60. It was his overtime jumper that settled the score 68-66 for the team’s first lead. Before fouling out, he scored 21 points to lead the team one last time.

“This is the greatest tournament in the world,” Graves said at the time. “We left everything out on the court and came up short, and I have no problem with that. I can go home and feel good that we gave it all we had.”

The two-time Academic All-American was second on Butler’s all-time 3-point field goals and finished third on the school’s all-time scoring list with 1,807 points.

This was it. The last time drinking Mountain Dew before a game, an admittedly unhealthy habit teammates called him out on. The last time throwing on his black undershirt beneath his No. 4 jersey. Black was for away games; white reserved for games at Hinkle.

“I didn’t think that I would be as emotional as I ended up being,” Graves said. “There was always next year. After that game was over, there was no next step. All these years of playing are done now. And that was a very emotional time after.”

As far as he knew, concluding his Butler career was the last step.

The Cinderella runs to the Final Four would not come until 2010 and 2011. When they did, Graves was there for the 2010 heartbreaker in Indianapolis and drove 16 hours to Houston with his parents in 2011.

March Madness is like Christmas morning, he said. That’s the way it was when he played, and that’s the way it is today. Graves takes off work as an actuary for Nyhart, a consulting firm, for those games.

The public eye towards Butler is greatest in March, and, when it was on Graves, he wanted to be anywhere but under the spotlight.

“We were travel partners,” Brandon Crone, a former teammate and Butler’s current coordinator of basketball operations, said. “I’d be lucky if he said four words.”

Everyone wanted to know what Graves had to say. At 6 feet 1 inch and 155 pounds, was he big enough to play at this level? Strong enough? Fast enough?

“He was so quiet, he never realized how much he was helping other people in the way he played and the way they watched him,” Butler assistant coach Terry Johnson said.

It was hard to avoid the attention when he started in 124 of 130 career games with 72 consecutive starts. The streak only broke after Graves had four wisdom teeth removed midseason at the insistence of the team’s dentist.

It was hard to be anonymous when his hometown of Switz City, Indiana had a population of 311.

Lexi Graves, A.J.’s niece, passes by her uncle’s picture in Hinkle on her way to work in the ticket office. The Butler sophomore recalled the way friends would react after making the family connection.

The A.J. whose picture Lexi passes in Hinkle is the same Uncle A.J. Lexi always tried to beat in Guitar Hero but never could. To them, he was never the college basketball star, and that’s what he preferred.

“I always find it humbling and fascinating that people are interested,” Graves said. “I’m definitely better at that today than I was when I was at Butler. People are interested in who I am and what I did and where I came from. When I look at what I’ve done, I’m just doing what I can with what I had in front of me.”

He meant it figuratively, but anyone who saw a younger Graves carry a basketball to every destination would say it could be taken literally. Basketball, Graves said, was “just kind of the sport I fell into.”

The ball was just out of reach and catching speed downhill as five-year-old Graves ran after it.

Somewhere in the background, his oldest brother Matthew was shooting at one of the five hoops set at various heights by the garage. Occasionally, A.J.’s basketball bounced onto the main court, and Matthew, 11 years older, kicked it away down the hill.

Decades later, Matthew was telling the story over the phone and chuckling.

Soon enough, Graves stopped being that kid running down the hill.

One-thousand seven-hundred career points at White River Valley High School, and he passed his other brother Andrew’s record. One-hundred points later, he passed Matthew. By the time Graves was en route to Butler, he was the school’s all-time leading scorer with 2,041 points and Mr. Indiana runner-up.

“I don’t think that I would’ve been nearly as good as I turned out being if it weren’t for all the practice I did,” Graves said. “It wasn’t just something that in high school I was like, ‘Oh, I’m going to put a lot of work in.’”

When Graves arrived in Hinkle, a familiar face helped rebound. Matthew, a former Butler player and assistant coach on staff, was assigned to his younger brother’s first individual college workout.

“That was really strange,” Matthew said. “We had shooting and free throw contests. There was a lot of trash talking and pride on the line. I made sure he had a hard workout beforehand and threw in some extra running. I was looking for every advantage I could, but I still got beat.”

Did they get into arguments? Occasionally. But neither brother was the type to confront the other. After one disagreement, A.J. left a note in Matthew’s office: “You need to leave tickets for mom and dad, I’m not doing it today.”

“You’re sitting there as a coach-slash-brother watching him compete at a high level,” Matthew said. “He’s making plays for others or making shots, and you can’t help but think how proud you are that he’s playing for your team at Butler. And at the same time, that’s my little brother that’s able to do some of those things.”

“I was always working on getting better,” Graves said. “If I was shooting 90 percent from the free throw line, why wasn’t I shooting 91? When you stop improving, you might as well stop playing.”

“Still?” Graves said. He shook his head. “Man, I thought someone would break that by now.”

He allowed himself that much, a little bit of pride in a skill that matters until it does. But the pride was more in what he did to get there.

Twenty-five free throws. That’s how many he needed to make in a row before he could go home after a workout. It was about accountability.

“I’m only so big,” Graves said. “There’s no reason to work on post moves. But everyone makes it to the free throw line. So, I might as well make the best of the situation when I do get to the line.”

He was never going to dunk. The guard’s frame was less than 155 pounds, even after spending hours with Jim Peal, the team’s strength and conditioning coach.

The first time Terry Johnson, one of his coaches, saw Graves, he had a hard time believing what he was seeing.

“At the time I didn’t really put it all together,” Johnson said. “He was slim — he’s still slim, but he was slender. When I realized that he was coming in as a freshman and when he started playing, I was like, ‘Oh my goodness, he is really good.’”

He was a “quiet assassin,” Johnson said.

Less than a year out of college, the quiet assassin was a business analyst for AIT Laboratories in Indianapolis.

“That was a very confusing time in my life,” he laughed. “I think I had rationalized in my mind that it was time to put basketball down and move on with the rest of adult life — getting a job and starting a career, because that’s ultimately where most people should end up.”

But the same inner voice that demanded 25 free throws was asking for one more thing: “Well, why didn’t you try to play at the next level? Or at least play in Europe somewhere?”

“I kind of joke here,” Matthew said, “but working a real world 8 to 5 job, that he realized that he wasn’t quite ready to be tied down to office hours and he wanted to see what else was out there.”

Three to four months of training later, Graves picked up where he left off. Kind of — if you could compare playing basketball in Poland to Indiana. Parts of the country reminded Graves of home. Which part? The flat farmland just outside the city.

Everything else was new — enough differences to fill the small notebook Graves used to record his new life. The way people went grocery shopping daily instead of once a week, or how ice was never used in drinks.

His teammates affectionately called him crazy. “You live in the U.S. and you came over here?” His coach didn’t speak a word of English. Graves didn’t understand plays drawn out in time-out huddles until an assistant coach translated.

His contract expired a year later, and Graves was ready to go back home.

“It was very lonely,” he said. “I saw it as a great opportunity at the time, but I just didn’t want to continue it. I had three older brothers, so they’re having kids and their kids were growing up, and I just felt like I was missing out. I decided that being at home with friends and family was more important than chasing after the basketball dream.”

The basketball dream. It resurfaces in small waves and suspends in the light rays of Hinkle every time Graves steps into the fieldhouse. Nostalgia darting in and out, the way he weaved around and about the court.

The team today — Johnson doubts any of them knew who Graves was until he came back for an alumni game.