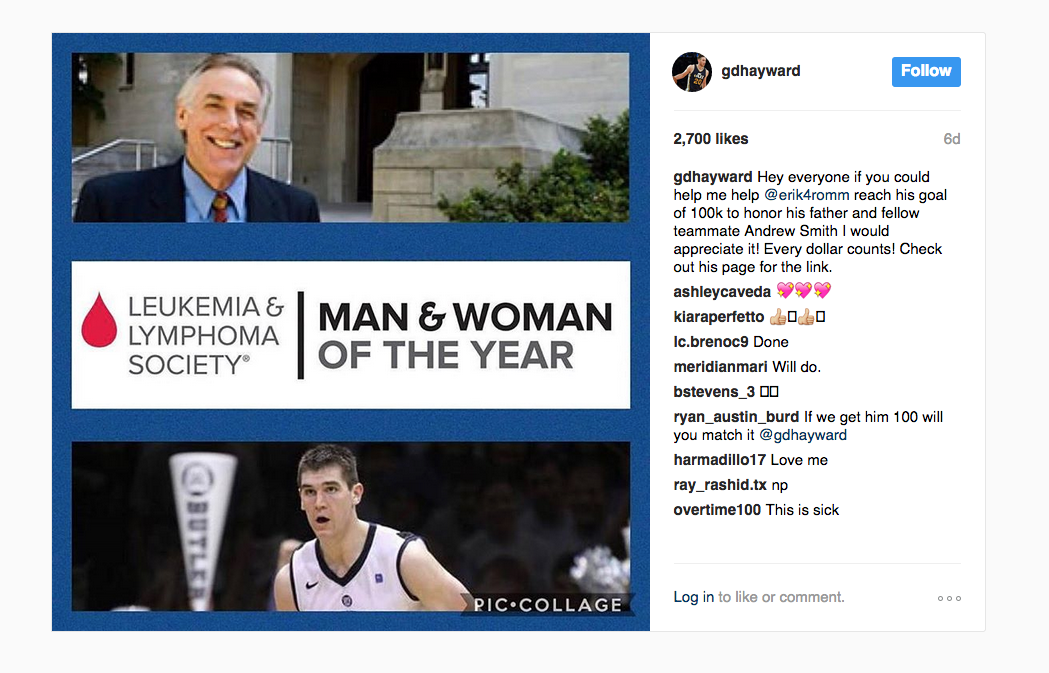 For a fan base that booed the Utah Jazz at the 2010 NBA Draft after their team selected Butler sophomore Gordon Hayward, they’re awfully reluctant about the possibility of the All-Star forward leaving.

In seven days, 528 people raised more than $6,000 through a GoFundMe campaign to rent a billboard with the word “Stayward” stretching across it.

Jazz fans, share this like crazy. Let’s get this billboard up and convince Hayward to stay in Utah. #TakeNotehttps://t.co/GtrptMTVPo

Hayward, who leads the team with 22 points per game, will be a free agent this summer. As the NBA postseason approaches, rumors concerning Hayward’s future are circling Salt Lake City. Some people say it’ll be the Miami Heat, and the whispers about a reunion with former Butler coach Brad Stevens in Boston seem to be getting louder too.

“I’m not foolish enough to think that a billboard is what is going to convince Hayward to make a decision that so deeply impacts his life, family and career,” he told the Salt Lake Tribune. “My hope is that it’s just seen as symbol for the passion this fan base has.”

The billboard, located between the Jazz practice facility and home arena, has yet to be put up. Still, the movement caught Hayward’s attention.“It’s pretty amazing,” Hayward told the Salt Lake Tribune at a team practice. “I think it’s really cool. I think it’s also cool that the guy said however much they get over they would donate to the cause that I tweeted about. I think that’s pretty sweet, too. So it’s exciting.”

On March 5, Hayward asked fans on Twitter and Instagram to help former Butler teammate Erik Fromm raise $100,000 for the Leukemia and Lymphoma Society. Immediately after, Jones updated the GoFundMe page to notify fans that leftover billboard funds will be directed to Fromm’s campaign.

So far, an additional $1,566 will be donated to honor Fromm’s late father along with former Butler center Andrew Smith, who passed away January 2016.

WE DID IT! A reminder that any money from here on out will be donated to GH’s friend’s campaign for cancer research. #Stayward pic.twitter.com/NnUIEYs6dy

Seven years after Hayward left Butler, aspects of his life still circle back to where it all began in Indianapolis.

Horizon League Newcomer of the Year, third team Academic All-American, the 2010 season that ended with the infamous shot launched in the final seconds of the NCAA Championship game against Duke before falling an inch short.

Weeks out of the Final Four, Hayward appeared in a press conference alongside his parents, grandparents and Stevens. It was always there — the possibility of playing professional. He could play in the NBA — that’s what Stevens told Hayward in high school, wasn’t it? He could play professionally — that’s what Hayward wrote on a sheet of paper in elementary school.

Could turned into would. He would declare for the 2010 draft, Hayward announced on May 7.

“It was one of the hardest decisions I’ve ever had to make,” Hayward said at the time. “From a basketball standpoint, it was kind of easy. What was difficult was leaving behind great people at Butler. My teammates were my best friends.”

When the Utah Jazz used their No. 9 pick on the 6-foot-8-inch forward, Hayward became the first Butler player drafted to the NBA since Lynn Mitchem in 1983.

“It was always in the back of my mind that he could go,” Butler alum Evan Krauss said. “I was on the side of it’s the NBA, maybe it’s his time to go. Just being able to see him grow, it was really exciting.”

Growing up in Brownsburg, Indiana, Krauss followed Hayward through the same middle school and high school before coming to Butler.

“There’s a sense of pride where you can buy an NBA jersey with someone who played for your team on it,” Krauss said. “To be like, ‘Yeah you see that player? He went to my high school. And he went to my university. And he led us to a national championship.’”

Hayward was off to play at the next level, and there was no billboard around the corner of Hinkle when he left.

“I don’t know if there was a big outcry from Butler fans,” said David Woods, the Butler beat writer for the Indianapolis Star. “But, I think they figured that was the tradeoff of losing Hayward but getting to the school’s first national championship.”

Once a Bulldog, always a Bulldog. We’re back in the tournament @ButlerMBB. That #ButlerMentality will take you far! #GoDawgs #MarchMadness pic.twitter.com/BgTFUNsGRy