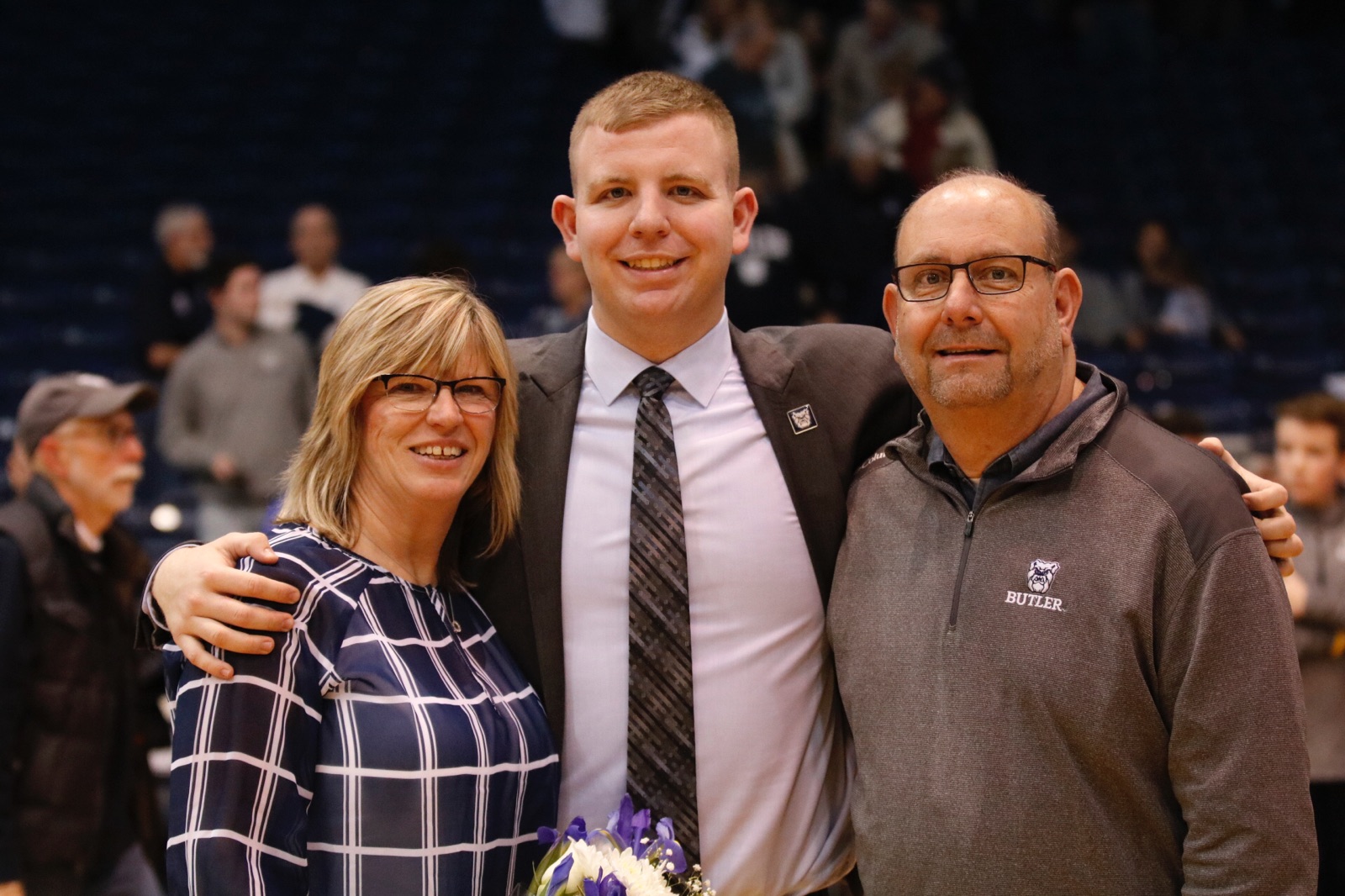 Pat Baker stands between his parents Stephanie and Michael. Photo by Jimmy Lafakis.

College basketball season can be stressful. A team must power through the ups as well as the downs to be successful on the court. This success is due to many moving pieces, including players, coaches, athletic administration and even the student managers that work behind the scenes.

Pat Baker, Butler men’s basketball head manager and senior management information systems major, has been a part of the team’s success in all four of his seasons.

Baker’s journey began when he was pushed to become a manager by his former coach.

“I am from Milan, Indiana, and basketball has always been a pastime there,” Baker said. “My coach was a manager at Ball State, and when I knew I wasn’t going to play basketball past high school, he talked to me about becoming a manager.”

Baker was set on joining a program headed by Brad Stevens. But the summer before Baker came to Butler, Stevens left Indianapolis for the NBA, becoming the head coach of the Boston Celtics. That move nearly changed his decision.

Baker was promoted to head manager last spring after the Bulldogs lost to Virginia in the NCAA tournament. As head manager, Baker’s main responsibility was to connect the coaching staff and the managers, sending managers whenever coaches needed someone for drills.

“Pat is one of those guys that just always goes above and beyond,” Sturtevant said. “He always led by example and did things without being asked. Pat was a role model to all of us.”

Baker emphasized that his job was to assist the coaching staff in any way he could.

“The goal of the managers is to make the coaching staff’s life easy,” Baker said. “We take care of the little things.”

Not only did Baker help the coaches, he helped the players before and after practice by getting them whatever they needed (gear, tape, food, etc.). Players and managers spend a majority of their time together, allowing them to form friendships.

“We were the only guys that have been around for the last four years, through the Brandon Miller era and the Hinkle renovations,” Baker said. “All four of us [including senior manager Matthew Qualters, who worked with Baker all four seasons] bonded; we were in it together.”

Now that Baker and Bennett have become good friends, Bennett said they joke about their past experiences with the team.

“We jokingly call ourselves the survivors,” Bennett said. “We had a lot of guys transfer, we struggled our first year in the Big East and we had a few coaching changes. We have that bond that’s different than what we have with the other guys.”

Bennett also noted the importance of managers and how Baker embraced his role as a manager.

“The managers do so much more than people realize,” Bennett said. “They basically do all the dirty work that helps make the season easier for the team. It requires an extreme amount of selflessness, and Pat exemplified that from the moment he got here.”

Baker is now set to graduate on May 6 along with his friends Bennet and Chrabascz. But, unlike his transition from high school to college, he will no longer be continuing his basketball career.

Baker recently accepted a position with Deloitte LLP, working in the IT department, which he will begin this summer.

“The opportunity within Deloitte shied me away from basketball route,” Baker said. “If I wanted to stay with basketball, I couldn’t tell you where I would be for the next four years. There was a lot of uncertainty going in that field.”

Even though Baker will not continue his basketball career, he will take the lessons he learned in his time as a manager with him to his new job.

“I’ve been able to take what I’ve learned in the classroom and relate it to Butler basketball as an organization,” he said. “I’ve been able to see how Butler athletics as a whole operates. I learned more at Hinkle Fieldhouse than I did in any classroom.”

Currently, Butler basketball faces a tough challenge moving on from great players such as Chrabascz, Avery Woodson, Tyler Lewis, Kethan Savage and others. The Bulldogs also now must move on from valuable, productive and essential managers like Baker.