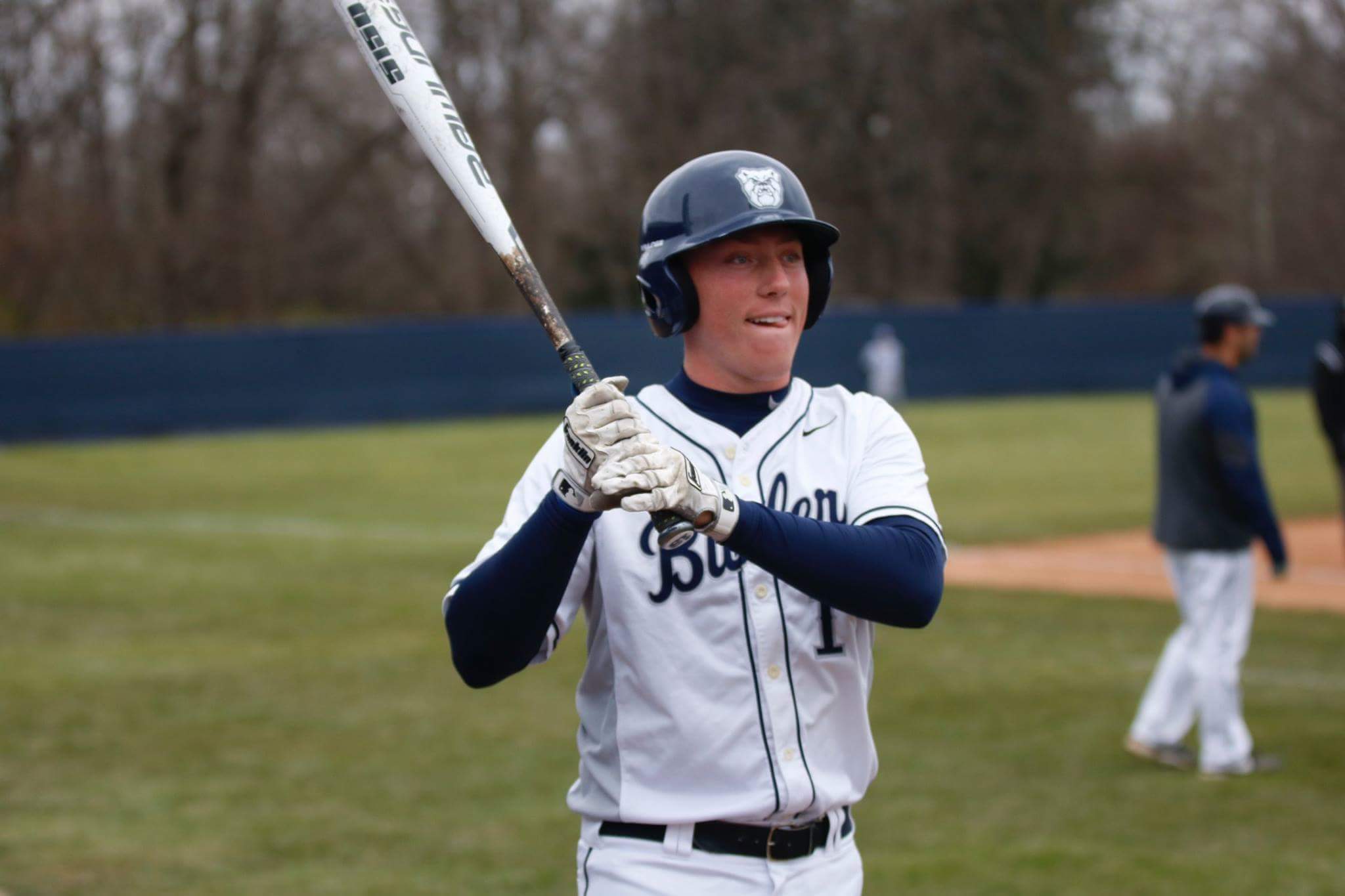 Kyle Niemiec with a bat during a game. Photo by Jimmy Lafakis.

It’s 5 a.m. Butler’s campus is quiet and most students have several more hours to sleep. But there is a dorm room filled with the sound of an alarm clock. It’s time for football practice, followed by meetings, classes and homework.

But the day does not stop there.

Then it’s 11 p.m., but it’s time for this student-athlete to make the trek down to Butler baseball’s hitting cages to get some batting practice in.

Kyle Niemiec is a first-year athlete on Butler’s football and baseball team. These type of days are not foreign to him.

Apart from athletes who run both cross country and track and field, Niemiec is one of two current two-sport athletes on Butler’s campus, according to Butler Athletics.

Niemiec played both football and baseball for over a decade. Starting with baseball at four and football at six, he hasn’t been able to put a ball down since.

Niemiec arrived at Butler to play football. He focused on football his senior year of high school, which led him here. After arriving on campus, he realized he wanted baseball back in his life.

“When I had time off, I realized I really missed baseball,” Niemiec said. “I saw all my buddies playing college baseball. I missed it so much.”

Throughout high school, Niemiec thought he would play baseball in college. He was recruited from bigger schools, but baseball became too much for him.

“I got burnt out my junior year because I didn’t have one day off,” Niemiec said. “I just couldn’t do it anymore.”

However, Niemiec found his love for baseball again, and he joined Butler’s baseball team.

On the baseball team, Niemiec is part of the group of new faces that bring a new energy to a team that struggled over the past few years.

“He brings a new enthusiasm to the club,” senior first baseman Jordan Lucio said. “He has a new perspective on the whole team. That’s what a lot of freshman brought this year. Seniors and juniors have had nothing but losing seasons. These freshmen haven’t had that, so they were excited for the new season.”

“I helped him with the little things,” Lucio said. “I make sure he is on time for everything and getting his work in. I told him to always be ready to expect the unexpected.”

Niemiec stays busy juggling football and baseball as well as taking a full schedule of classes, but he learned useful lessons because of it.

“It taught me time management,” Niemiec said. “Your time off is resting, doing homework. That’s the biggest thing, time management, and enjoying the times you have off.”

When he does have a day off, Niemiec likes to relax and cherishes the times he gets to spend at home.

“When I’m back home, I like to be with my family, that’s the biggest thing,” Niemiec said. “I like to enjoy my time with them when I have a day off.

Niemiec finds relationships to be a big part of his love for sports. He said he loves hanging out with the friends he made through athletics. He can sit and have a meal with anyone on the baseball team. His two-sport lifestyle is time consuming, but he believes the reward is far greater.

Right now, Niemiec said he will continue with both baseball and football in college.

“It’s going to be very difficult,” Niemiec said. “I’m still trying to figure out how to do it. It’s like two full-time jobs, and then college. I’m loving it though. It’s what I signed up for.”

Niemiec and the baseball team will be back in action Thursday, April 13, when they take on St. John’s in their second Big East series this season.