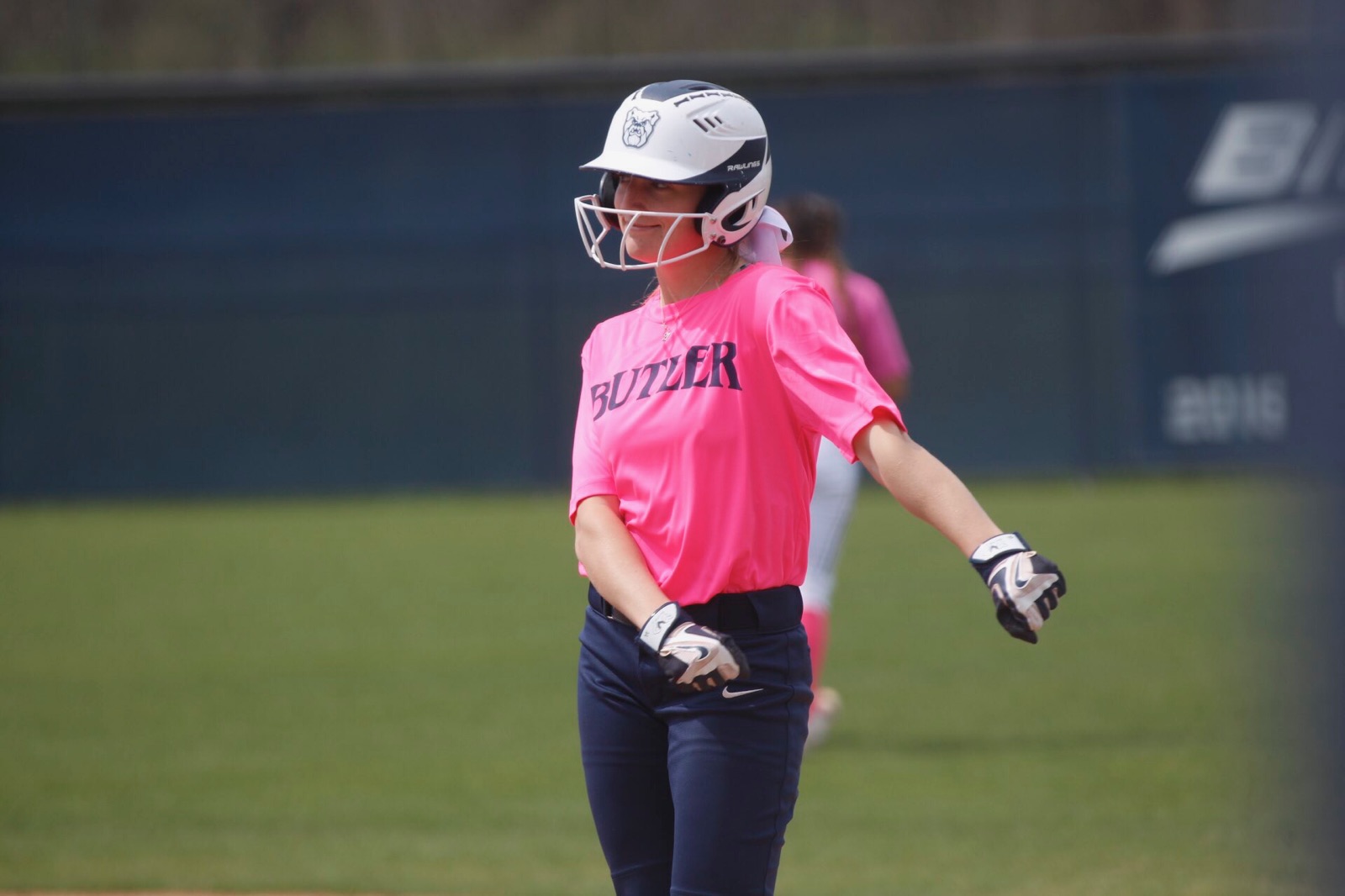 Jenna Foreman does a dance after getting on base. Photo by Jimmy Lafakis.

Woosh. There she goes. Jenna Foreman ran past you. Didn’t see her? You probably blinked.

She beat out another infield single, and now she is doing the dance that everyone loves. Fans adore it. Opponents hate it. Like it or not, she just shimmied on first base.

You can’t teach speed. Foreman brings it in spades. Her robust quickness led to her most remarkable honor of her college career: Big East Player of the Week last week.

The sophomore outfielder hit .846 in one week. That average included a 9-for-10 weekend which helped Butler sweep Villanova at home. She recorded one RBI and scored four runs in this stretch as well. Those statistics shrieked something special.

These numbers did not surprise her teammates.

“On that Saturday, I knew she was going to get it,” freshman utility player Madi Christiansen said. “I was thinking to myself, ‘There is no way somebody will beat her out, she is literally unstoppable.’ We have been calling her ‘No-Answer Foreman’ because it is unreal how often she gets on base.”

The human lightning bolt bats lead-off for the Bulldogs. Foreman comes from a family of track runners and traces her agility back to her roots as a youngster in Winfield, Illinois, just 45 minutes outside Chicago.

“I guess running fast is just in my blood,” Foreman said. “Growing up, my parents had me playing soccer, basketball, volleyball and of course, softball. I think being so active growing up has helped me become so fast.”

The 5-foot-5-inch Foreman is a fast learner. The dance craze swept the softball team, and Foreman caught on to the shimmy quickly.

“When I beat out an infield single, it helps bring the energy out in everyone,” Foreman said. “Doing the fun dance gets me hyped and keeps the atmosphere positive and fun. In my opinion, that’s what it’s all about.”

Sophomore infielder/pitcher Kaitlin Doud lives with Foreman in Apartment Village. Doud said she is proud of her best friend.

“When she won, I was super excited for her,” Doud said. “One thing I admire about Jenna is that she does not quit to improve.”

Their bond goes deeper than the diamond.

“Just the usual puddle jumping in storms and the late night jam sessions in the indoor hitting facility,” Doud said.

Junior outfielder Katelyn Cahill and Foreman bonded through talking about Chicagoland. Cahill said she cannot wait to see how her teammate and friend impacts the rest of the season.

“Jenna poses a threat to every opponent we play, both in the outfield and at the plate,” Cahill, a LaGrange, Illinois native, said. “She has always had the speed and natural abilities to play like that.”

Last season, Foreman saw the bulk of her action as a pinch runner. Now, her job is to set the table so the Bulldogs behind her can find success. Foreman said she has accepted her role on this year’s team.

“I am really just trying to do whatever it takes to help the team,” Foreman said. “I just want to perform the best I can to help our team be successful.”

Foreman tore her ACL five games into her senior year of high school. She chose not to redshirt. After playing a limited role last spring, she had labrum surgery last summer.

However, those injuries have not set her back. Foreman finds herself second on the team in batting average (.381), hits (40) and runs scored (24).

“I have been working hard to be the player I used to be before the surgeries,” Foreman said. “I am now starting to see her again. These last few weeks have really helped boost my confidence.”

Those outside of her team recognize her must-see action.

“Against Villanova, there were some little girls who would imitate the dance when I got on base,” Foreman said. “My parents were sitting by some girls who would be like, ‘Look, look! You’re missing it!”

She is just that fast.

#Butler‘s Jenna Foreman does her signature dance after getting on base. pic.twitter.com/J1nwtLT5xb