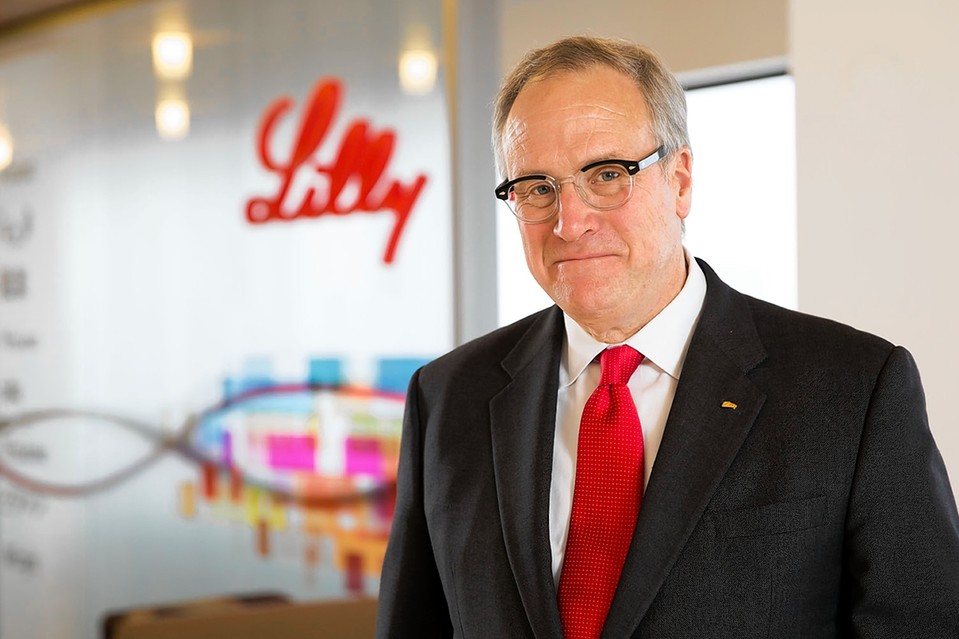 When John Lechleiter and his wife Sarah moved to Indianapolis in 1979 for his new job as a chemist for Eli Lilly, he never imagined becoming the CEO of one of the largest pharmaceutical companies in the country.

“I’d just gotten my Ph.D. in chemistry and I wanted to apply that,” Lechleiter said. “I enjoyed working in the lab. I really hadn’t set my sights any further than that.”

Now, nearly four decades later, the recently retired president and CEO of Indiana’s second-largest public company will be honored along with his wife at Butler’s Spring Commencement, where Lechleiter will deliver the keynote address.

John and Sarah Lechleiter will receive honorary degrees of science and humane letters, respectively, at the May 6 ceremony in recognition of their professional achievement and service to the Indianapolis community.

Four years after earning a bachelor’s degree in chemistry from Xavier University in 1975, Lechleiter began his career at Eli Lilly as a senior organic chemist.

After working in research labs for a number of years, Lechleiter worked his way up the ladder in a variety of corporate positions beginning in the late ‘90s before being named Lilly president and chief operating officer in 2005 and promoted to CEO in 2008.

Lechleiter rose to the position of CEO as the company braced for a significant revenue loss, due to losing four of the company’s largest patents.

After some initial setbacks, Lilly rebounded as it started successfully introducing new products to the market under Lechleiter’s leadership.

Today, he said the company is “well along the way to launching what could be as many as twenty new products from that period in 2014 through the early part of the next decade. So I think Lilly’s in a really good place today.”

Lechleiter was quick to point out that these successes were due to the 40,000 employees and their hard work.

“I think the fact that I’d come out of research and that I knew Lilly pretty well, I really did have confidence,” Lechleiter said. “Plus, I’m pretty stubborn.”

Sarah Lechleiter believes that her husband’s persistence came from his background.

She noted that his parents were people “with great faith” and “people of conviction” who passed those traits onto their kids.

Addressing her husband, she said, “I just think you had the perfect storm for giving you the tools that you needed to stick with whatever it was you were doing. And it just happened to be you leading [Eli] Lilly at the time.”

That persistence is important in the pharmaceutical business, where introducing new drugs to the market is a “long, involved process,” Lechleiter said. “I think it’s important to keep that perspective. I had the confidence that we would prevail at the end of the day.”

He also stressed the difficulty and importance of perseverance in business overall.

“One of the hardest things in business is to have the courage of your convictions,” he said. “And to have the resolve and the determination and the patience that’s sometimes necessary to see your way through.”

That philosophy paid off as Lilly has markedly recovered in the period leading up to his December 2016 retirement.

“I’m proud of the fact that is Lilly is still here, we’re strong, we’re viable, we’re independent, we’re an important part of this community,” Lechleiter said.

Community service and involvement are very important to the Lechleiters. They are pleased to have been able over the years to both represent Eli Lilly in the community and also to support many causes that they are personally passionate about.

The founding family of Eli Lilly was heavily involved in the community, and today recipients of the Lilly Endowment Community Scholarship often attend Butler.

The involvement of the founding family was an example the Lechleiters were happy to follow.

“We need to carry that sense of philanthropy along,” Sarah said. “It’s sort of our duty and our responsibility, and it’s been really nothing but a joy.”

They have been particularly active in their support of the United Way, a shared interest of theirs.

“We really have always felt that United Way was a great vehicle, a way to help us help the community because they have such a wonderful way of studying the needs of the community and reaching out to all the different organizations,” she said.

“[They’re able] to get things done through a collective action way beyond what a lot of other organizations can do,” he said.

“If [Eli] Lilly’s going to recruit the best people from around the world or create opportunities for kids in this community to grow up and work at Lilly, we’ve got to have a strong underlying fabric here. I think it’s sort of in businesses’ self interest, in a sense, to get involved in United Way.”

The couple has also been particularly vocal about their support for access to quality early childhood education.

“There’s (approximately) 27,000 four-year-olds in the state today that fall between the cracks, that aren’t eligible for federal or state grants (for pre-K education), or their parents can’t afford that,” Lechleiter said. “I think that’s who we’re going to bat for.”

Sarah in particular said she believes that another part of having a healthy community is supporting the arts. She serves on the boards of the Indianapolis Symphony Orchestra and the Indiana Repertory Theatre.

“The symphony and our repertory theater give us so many wonderful opportunities to celebrate the arts,” she said.

In addition to the great performances put on by both organizations, Sarah Lechleiter said she is proud that both the ISO and the IRT have outreach efforts which give children in the community the opportunity to not only learn about music and theater, but also to gain the confidence and life skills to succeed later in life.

“Both of these organizations help to bring wonderful, wonderful things to our community and we’re so lucky to have them both,” she said. “It’s really a privilege for me to serve on those boards.”

It is this combination of business stewardship and community service that contributed to the Lechleiters selection as honorary degree recipients, according to Butler University President James Danko.

“Whenever you’re going to give an honorary degree from your university, it has to be a good fit for the accomplishments and the character of those people that are going to receive an honorary degree,” Danko said. “Because you’re really stating that these people are compatible with the Butler Way and the Butler community, and John and Sarah exemplify it in so many ways.”

John Lechleiter said that he’s most pleased that they are both being recognized.

“Sometimes because of my having been CEO of Lilly I get the headline,” he said. “But, I think President Danko and the board recognized that it’s not just about me. That this is really a recognition of both of us. And recognition of the fact that Sarah’s been my partner in every way over these many years that we’ve been in Indy. So, I’m particularly pleased about that.”

“To be honest I’m blown away,” Sarah Lechleiter said. “I feel like so many other people are probably way more deserving. But we’re so honored and it’s just very kind of the Butler community to bestow this upon us. We really are humbled by that.”

John Lechleiter summed up the couple’s feelings by stating, “We really value what Butler brings to this community. Butler has tremendous programs across the board. We’re so happy to see Butler continue to gain recognition and prominence because we think we’ve had a jewel here all the time. We’re very, very proud, very pleased to accept this honor.”