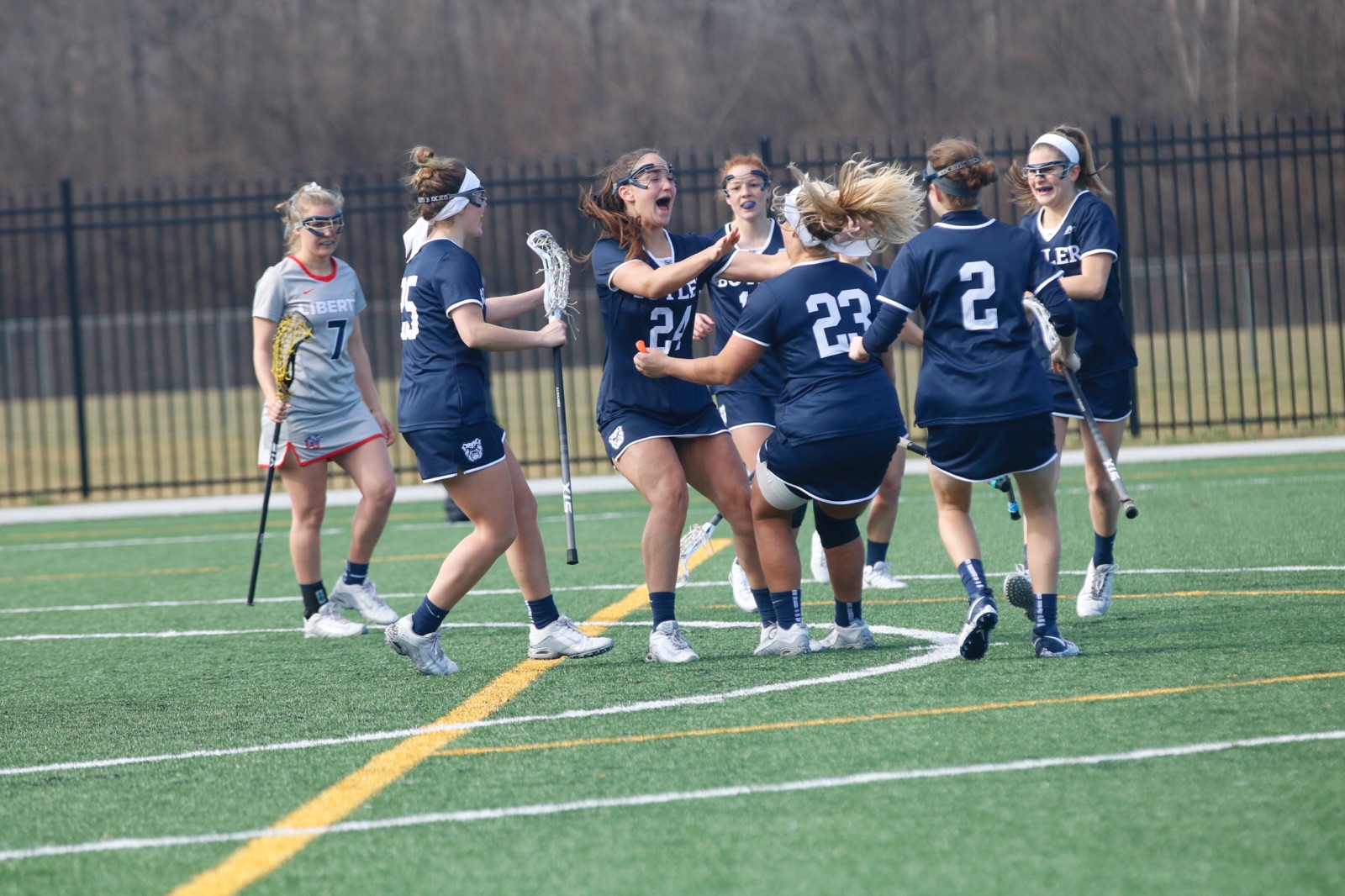 From left, Haley Hallenbeck and Madison Christian celebrate after scoring a goal. Photo by Jimmy Lafakis.

Haley Hallenbeck and Madison Christian came together, united by a bond they wouldn’t completely understand for months. They were thrown into the fire and asked to lead the new Division I lacrosse team. Their mission would entail guiding a group grasping for an identity.

Hallenbeck and Christian share these titles. They also reside at the top of the charts in another category: goals scored. Hallenbeck, a midfielder, leads the team with 22 goals. Christian, who plays attacker and midfielder, added 15.

But for these Bulldogs, leading the lacrosse team by example takes priority.

“We’ve had no one to look up to,” Christian said. “So, we want to be leaders on the field.”

A smorgasbord of former club players, transfers and others comprise the team. Hallenbeck, Christian and senior Emily Annand serve as captains. Hallenbeck gave special credit to one group in particular.

“The freshmen have really stepped up a lot,” Hallenbeck said. “Leading the team has been a great honor. We can’t do it without our teammates.”

Hallenbeck, a redshirt sophomore, transferred from Bryant University in Smithfield, Rhode Island. This season is something of a homecoming for the Indianapolis native. Hallenbeck earned two-time U.S. Lacrosse All-American honors and was a first team All-State Indiana Girls Lacrosse Association pick throughout her high school career.

“It’s nice to live five minutes away,” Hallenbeck said. “My mom and I love to host the team for dinners. Our whole team is pretty close now.”

“It’s also nice to go over to Haley’s house and do laundry,” Christian said after Hallenbeck finished her sentence.

Christian came to Butler after two years at Community College of Baltimore County Essex. The Severna Park, Maryland, native won team MVP and served as captain while winning Junior College’s Female Athlete of the Year. Christian said it was important for her to gain new experiences after junior college.

“I lived at home, so I wanted to rip off the Band-Aid and get away,” Christian said. “It kind of feels like home here because I have a family member at every game.”

Freshman Meredith Hyre said bonding with her teammates made her adjustment to college easier.

“I don’t think there could be a better combination of captains,” Hyre said. “Madison knows what to say in tough times where I don’t know what to do. You will never catch Haley dwelling on her own or a teammate’s mistake, but will find her saying ‘You’ve got the next one,’ and keeping the vibes on the field positive.”

The camaraderie of the team helped bring Hallenbeck and Christian together. Christian said they bonded after seven months.

“We won our first game over spring break, and I feel like that was the turning point,” Hallenbeck said. “That brought our whole team closer. We both have that winning feeling.”

“It’s also nice to go over to Haley’s house and do laundry,” Christian said after Hallenbeck finished her sentence.

The captains also made a palpable impact on their coaches. Assistant coach Paige Beierschmitt said Christian assists the team in various ways.

“Madison brings a great energy on the attack side of the ball,” Beierschmitt said. “My favorite part about coaching Madison is her charisma. Her humor at practice and on the road is contagious and always keeps us laughing.”

Beierschmitt lauded Hallenbeck’s poise and said her experience is critical.

“With so many freshmen and inexperienced players, her role is vital to our growing program,” Beierschmitt said. “She leads by example with her work ethic and shows the younger players what it takes to be successful.”

Hallenbeck may lead the team in goals, and Christian may hold the distinction of scoring the first goal in Butler women’s lacrosse history, but these Bulldogs stand united by one objective.

“We just get out there and want to win,” Christian said. “I get chills every time we walk onto a new field.”

Nothing like screaming The Butler War Song after a W?? #dawgsgottaeat pic.twitter.com/RaEG19y5hl