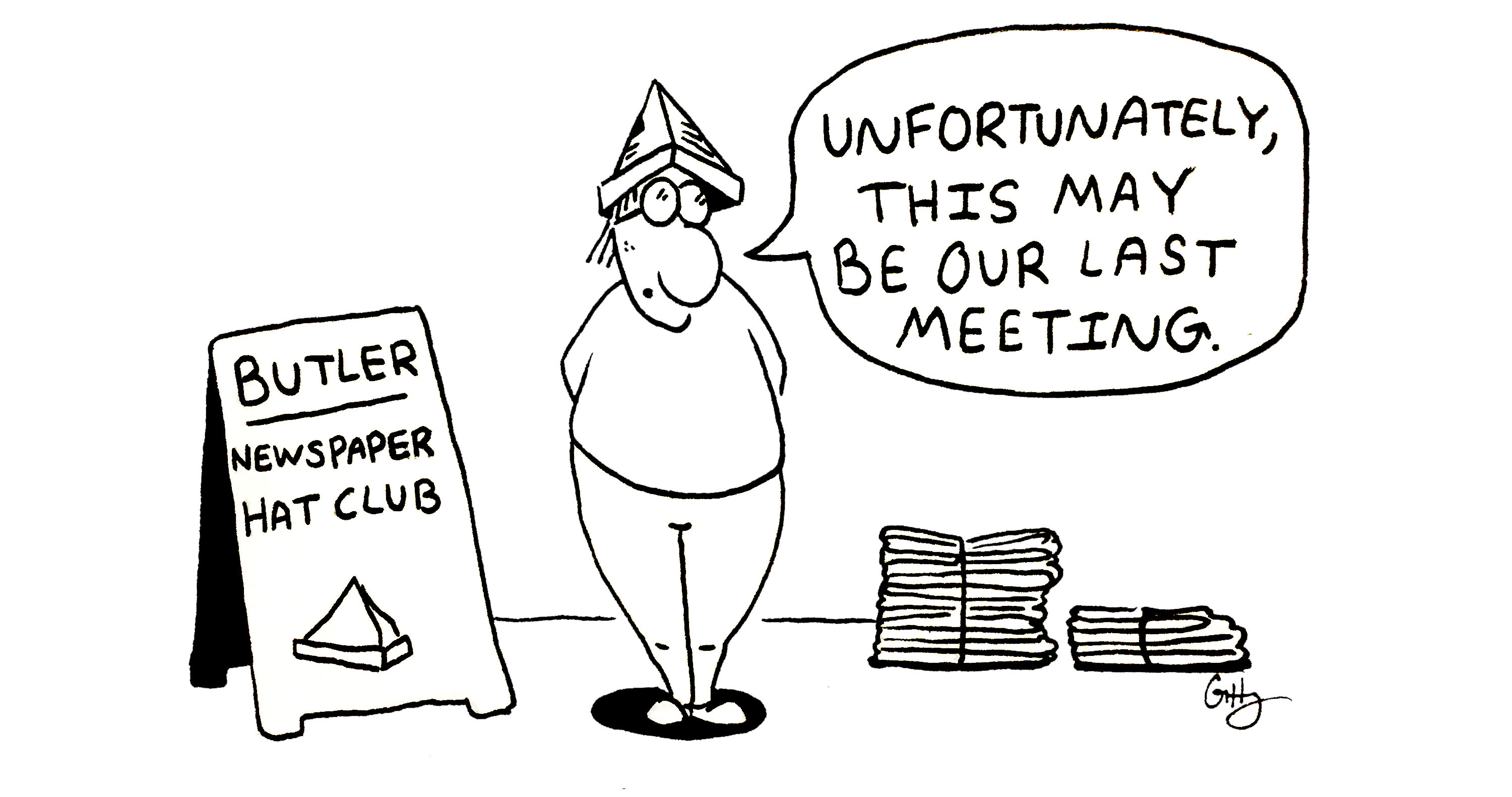 The irony of writing print journalism about the consequent death of print journalism has not gone over my head. Butler University is fast approaching a time where the various newsstands on campus will be empty. Soon the days of grabbing a  copy of the New York Times will be behind the students and staff of Butler University, and all that will be left is the Butler Collegian (no New York Times, I know, but wow what a great publication!).

Butler’s Student Government Association is voting to end the pricey news subscriptions currently at the university due to research that was conducted regarding the readership of the print publications. The research was overwhelming. Nobody reads the newspaper.

SGA voted for its third of the funding toward the news subscriptions will be no longer, but they remain in a stage of deliberation on how the campus’ subscriptions will be handled in the future. Maybe it is just me, but I happen to know a few who do religiously grab a paper, whether it be to catch up on world events or simply to fill out the crossword.

Personally, it is disappointing to see the news subscriptions go. The internet allows for a wide array of news sources and opinions that can be summoned at the click of a button. However, there is still nothing quite like the reading of a news story in an actual newspaper that has been subject to extreme editorialization or to in-depth investigation.

Papers spark conversation that is unique and can be shared via actual in-person interaction rather than the sending of a link. It is trivial, sure, but there is absolutely something to be said for what is widely perceived to be a now outdated practice.

The disinterested or preoccupied student doesn’t have time to pick up the overwhelmingly thick the New York Times and pretend to be interested in a story about foreign relations or political structure.

Who has the time with classes and papers and enough reading that has already been assigned?

The newspaper does not feel like downtime, it feels like homework. This fact is, again, proven overwhelmingly by the research conducted by SGA.

In a survey conducted by SGA with a pool of about 200 students, the response showed more than half of students did not pick up a newspaper. The students that did take one were also only taking them for personal use, rather than for academic use.

Currently, the Butler Collegiate Readership Program is what provides the newspapers across campus, and the subscriptions are paid for by SGA, Student Affairs, and Academic Affairs in an equal split of about $9,000 per entity.

“SGA will not be eliminating the program campus-wide and wants to provide learning and understanding for the community but in a way that uses student funds wisely,” SGA President Paige Haefer said.
Deliberations are being had between SGA, student affairs, and academic affairs on whether there will be less locations, a paper subscription eliminated, or even online subscriptions provided by the library.

Haefer said this research and elimination of the paper is not because SGA does not care about the news, but because its first priority is to use student dollars wisely.

As Paige Haefer’s presidency comes to a close and Jimmy Lardin’s approaches, Haefer said it will be up to him and his administration to determine how news will be provided to the Butler community.

As decisions are made, SGA’s decision is both understandable and responsible. Most papers in the residence halls go completely untouched by students, and it does not make sense to continue to pay for them.

It would be a shame to get rid of the print products entirely, and I hope to see papers throughout campus in some capacity in the coming years.