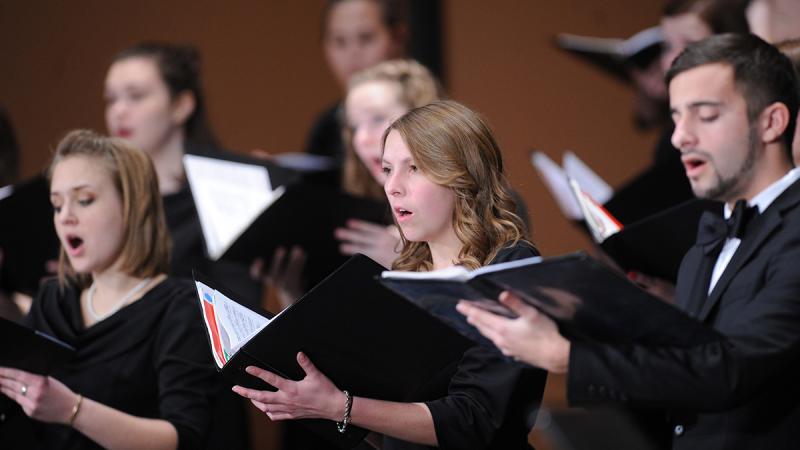 Too Many Sopranos will be at Schrott Center for the Arts on Friday and Saturday, April 14 and 15, at 7:30 p.m. The music is by Edwin Penhorwood, a faculty member from the Indiana University Jacobs School of Music. The libretto is by Miki Lynn.

The plot of the opera is centered around four diva sopranos who arrive in Heaven, only to learn that there is not enough room for them in the Heavenly Chorus due to an overload of tenors and basses in Hell. St. Peter requests that each of them audition, but fails to decide who to allow in. If the sopranos perform a selfless deed in Hell, they will be allowed to bring back tenors and basses to Heaven and then will be able to join the Heavenly Chorus.

Maestro James Caraher is the artistic and music director. Laurel Goetzinger is the stage director and has worked with the cast on all non-singing aspects of the production, such as staging, character development, physicality and movement and research into historical and societal contexts.

“I have found working with the Butler singers and actors to be delightful,” Goetzinger said. “They are all skilled and talented singers who have worked diligently and consistently on the tasks involved in putting together this production.”

Goetzinger said this show is a farce, a type of comedy that utilizes stock characters and plot elements focused on standard operatic stereotypes particularly from the 1920s to 1980s.

“We hope that the audience will have a delightfully good time,” Goetzinger said. “This is a broad comedy, which invites the audience to laugh at the foolishness of these characters and human relationships in general.”

Goetzinger also said there will be English surtitles projected above the stage.

“We have found that surtitles greatly increase the accessibility of opera for our audiences and their enjoyment,” Goetzinger said.

Additionally, a pre-show talk with artistic and music director Caraher will occur before each performance. Tickets are $15 for Public, $10 for Seniors, $7.50 for students or with Butler Student ID.