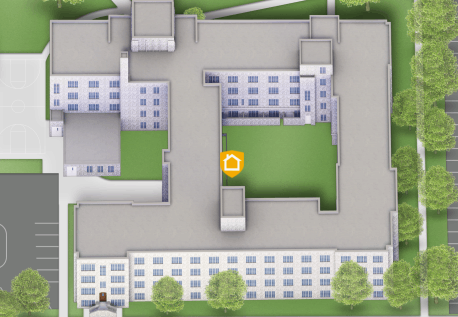 In the interior of Ross Hall sits a patch of green grass. It is secluded from the rest of campus by the walls that house many of Butler’s first-year class.

Because it is so quiet, isolated and literally enclosed within the residence hall, you might think that it would be a perfect place for students to relax, study and hang out.

Zach Madere, Ross resident and first-year pharmacy major, has never been inside the courtyard, but said he thinks that it could be fun.

“It looks like a nice area,” Madere said. “You could totally set up a volleyball net right in the middle of it, instead of just leaving it there. It seems like kind of a waste.”

While the space might be the perfect size for outdoor activities, it is totally enclosed by the building and has just one door to get out in case of emergency. This makes the courtyard a fire hazard.

Josh Toly, junior risk management and finance major, is an RA in Ross Hall’s Unit 6. He said he understands the risks associated with the courtyard.

“Imagine if there are 20 kids in there and a fire happens in the building or if the door doesn’t work,” Toly said, “See, I’m a risk management major so I always have to be aware of these types of things. What if someone gets hurt in there and the EMS have to get them? It’s tough for them to get into the building because they have to have someone with an ID to get them inside.”

Despite his current position, Toly, just like Madere, said he has wanted to utilize the courtyard in the past.

“During my first year, we wanted to have a snowball fight in there, but my RA wouldn’t let us,” Toly said, “One of my friends who was on the cross country team freshman year was running laps in the courtyard because they didn’t know at first and they got written up.”

Toly has been an RA for the last two years. He and the other RAs monitor the courtyard while on duty.

Rich Michal, the Executive Director of Facilities, said the only problem with using the courtyard is that there can’t be more than 49 people in the space at a time because there is only one exit.

“To be honest, I don’t know why,” he said. “That may be something that we want to have a dialogue with Residence Life about. From talking to my staff, our only concern was that there is a limitation on the number of students that can be out there. But otherwise, I don’t know of any other reason why students couldn’t use that space.”

It seems that the courtyard is off limits to students because of the difficulty that Residence Life would have regulating the numbers of occupants.

Rebecca Gerske, junior spanish and pharmacy major, is another Ross RA. She too has been in the position for the last two years.

“It’s just an issue with is something were to happen there aren’t enough doors to get people out of there,” Gerske said.

She also envisioned that the space could be better used if it were safe.

“I think it would be awesome if we could use it for something more productive, even if it was just picnic tables or a place for people to study and hang out, but I also understand that it is the law and we need to follow it,” Gerske said.

In the past, people have gone out of the courtyard, but it hasn’t been too serious of an issue.

When Ross was built in the early 1950s, it was originally an Air Force ROTC residence hall. Sometime between then and now an addition was made to the building itself that may have caused the courtyard to be totally enclosed.

“I’ve been here six years and I don’t know why Ross has been closed off,” Michal said, “I don’t know who made that decision or when it was made. I think it’s one of those where it has just always been that way but that doesn’t mean we can’t revisit that and see what we can do.”

The courtyard’s most recent use was not for students. The courtyard used to be home to a handful of trees, said Michal. The greenery was eventually removed because it was too challenging to maintain within the enclosed space.

Ross Hall is the oldest residence hall on campus, and, since then, Butler’s dorms have upgraded to fix the problem of the wasted courtyard.

ResCo and Fairview House both have courtyard areas, but neither dorm fully encloses them like Ross does. Therefore, students can use these spaces as they wish. Fairview House even has a patio area with tables and places for students to study or relax in their courtyard area.
According to the most recent campus master plan, Butler plans to build a dorm that is shaped like a horseshoe. This would allow students to make use of the courtyard space without worrying about possible fire hazards.