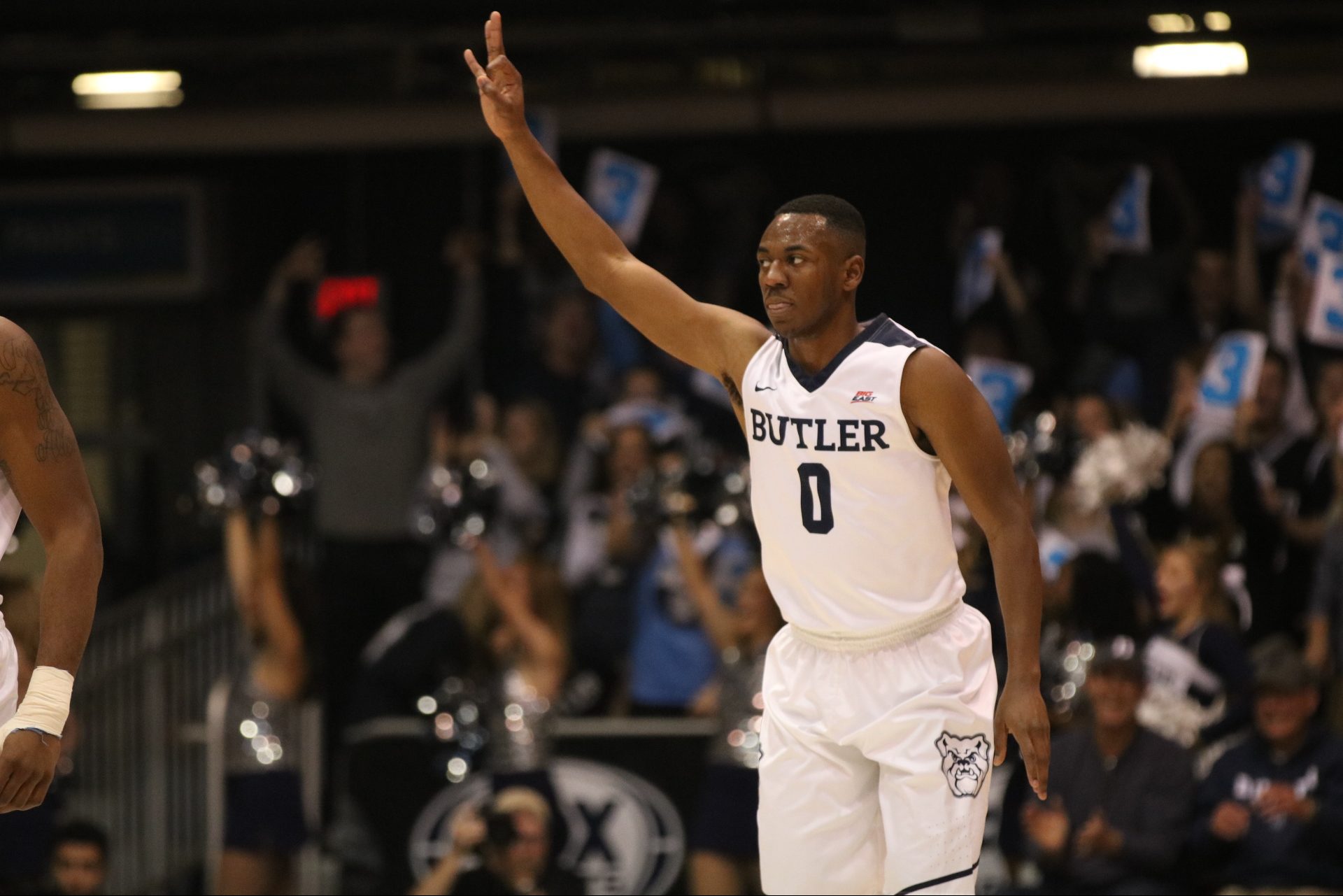 Avery Woodson sends up the fingers after draining one of his signature three-pointers. Photo from Collegian archives.

University of Memphis Tigers fans became accustomed to finishing public address announcer Geoff Mack’s three-point call for two years. Once the guard splashed the ball through the net, Mack lit the flame and the fans finished the refrain.

Times have changed, but Woodson’s game stayed the same.

He arrived in Memphis for the Sweet 16 round of the 2017 NCAA Tournament, where he said he is “absolutely” looking forward to shooting at the rims in the FedExForum.

But this is no typical return to town. This is a full-out homecoming on a national stage, and Mack said he could not be more excited.

“How many times can I say I’m damn proud of him?” Mack said. “Once he hits his first shot and I say his name again, my heart will be smiling.”

I will say it will be an honor to announce former Memphis Tigers @_Subzzer0 name one more time in FedExForum this week. #averywoodsonfor?

Butler will face University of North Carolina on March 24 at 7:09 p.m. Woodson has averaged 12.5 points a game and made over 57 percent of his three-pointers in his first two NCAA tournament games. If victorious, Butler will advance to the Elite Eight on March 26 to face the winner of UCLA vs. Kentucky.

Not only is Woodson taking advantage of the homecoming, but people in the city are, too. This week alone, Woodson appeared as a guest on multiple Memphis radio stations, including ESPN 680 AM.

“Memphis is a very special place,” Woodson said. “I’ve had a lot of good times and good memories in that city. That city has shown me love and made me a better and stronger person. I am excited to go back.”

I haven’t been on twitter in a while.. but this calls for it! Memphis, I’m coming back!! #SweetSixteenBound

James Harvey is a trainer, mentor and NBA skill development specialist at Full Potential Fitness and Sports Training in Memphis. He was a personal trainer for Woodson during his Tigers tenure. Harvey said his mentee and friend paid his dues while in the Bluff City and will always be a part of it.

“Once you’re a Tiger, you’re a Tiger for life,” Harvey said. “It’s a fraternity of brothers, and Avery is definitely a part of it. He is a very loyal kid.”

“When folks around here saw Avery, it wasn’t ‘Here comes the rockstar,’” Harvey said. “He was always in the gym and he always had solid people around him.”

Passionate Butler fans welcomed Woodson to Hinkle – none more invested than his girlfriend, Angelia Allen, who played basketball at Long Island University Brooklyn. She is excited to watch her boyfriend in his old stomping grounds; something he has wanted for so long.

“He has been wanting to play in the tournament his whole career,” Allen said. “I don’t even know if special is a big enough word to describe it.”

Most Butler players welcomed their Selection Sunday draw with muted cheers and applause. Woodson, however, hooted and hollered in Hinkle Fieldhouse’s Wildman Room, because he was finally reaching a lifetime goal.

The “big dance” may feel different, but the rims are still 10 feet high and the court 94 feet wide.

“It’s still the game of basketball,” Woodson said. “I’ve been playing it for a while. There is no need to overcomplicate it just because it’s the tournament.”

When Woodson returns home, Mack said he expects Tiger fans will come out in full force on Friday to welcome their old friend.

“When he was here, everyone wanted to say one thing,” Mack said. “And that was ‘Avery Woodson is my friend.’ He was a friend to so many.”

The team departed for Memphis Wednesday afternoon. Woodson, known for being a big, fun personality in the locker room, offered a few words of advice for any Bulldog fans making the trip down Interstate 57: hit up the places he doesn’t always get the chance to go to.

“You’ve got to go to Central BBQ,” Woodson said. “And Ching’s Wings. Get the honey gold sauce.”