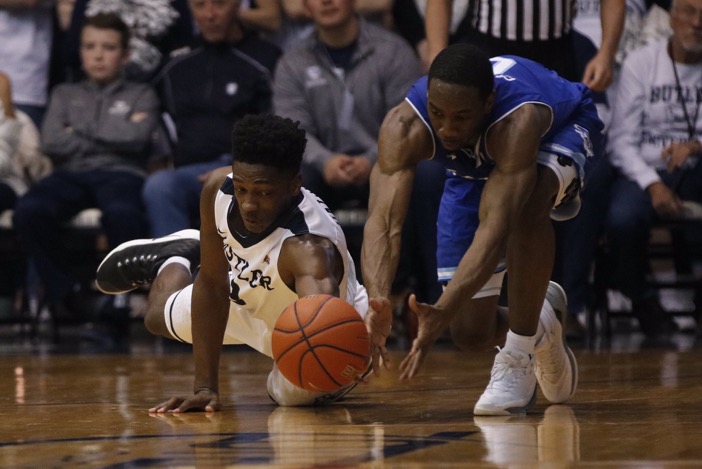 Kamar Baldwin dives for the ball. Photo by Jimmy Lafakis.

Well now I’m mad AND hungry. I pity the team that draws our name next week. #GoDawgs https://t.co/yFzPJttzcn

I’m about to punch a wall!!! YOU SHOULD NOT LOSE TO THIS XAVIER TEAM

Well #Butler lasted as long in the #BigEastTournament as Bogut did in CLE… pic.twitter.com/lnPVpmpXfg

Well that loss stings a bit. May that pain motivate our preparation and play next week. #GoDawgs

Just one time I’d like to enjoy this weekend.

Let’s grind one out here.

I won’t retweet all of them, but judging from my Twitter timeline, #Butler fans are searching for a bridge from which they can jump off.

Dawgs will be fine. Woodson, Kamar gave us squat tonight, have a week to get back on track. There’s a lot of hungry dudes ready for NCAA.

If someone hasn’t played the whole game what gives someone the idea that they should be put in as part of the last play of the game?

#Butler inconsistency offensively, especially late in games as of late, is a big red flag come next week.

Everyone was not on the same page in that game 😳

@ButlerMBB didn’t want to be in NYC. Couldn’t finish. Sad!

#Butler fans hated Blueitt for picking Xavier over the Bulldogs. He sticks it to them big tonight.

Holtmann was really bad in last minute and WTF was that last lineup? #butler

Hard to beat the same team three times in one season. Onward and upward, make a run where it matters most. #GoDawgs #Butler

The #Butler didn’t do it tonight