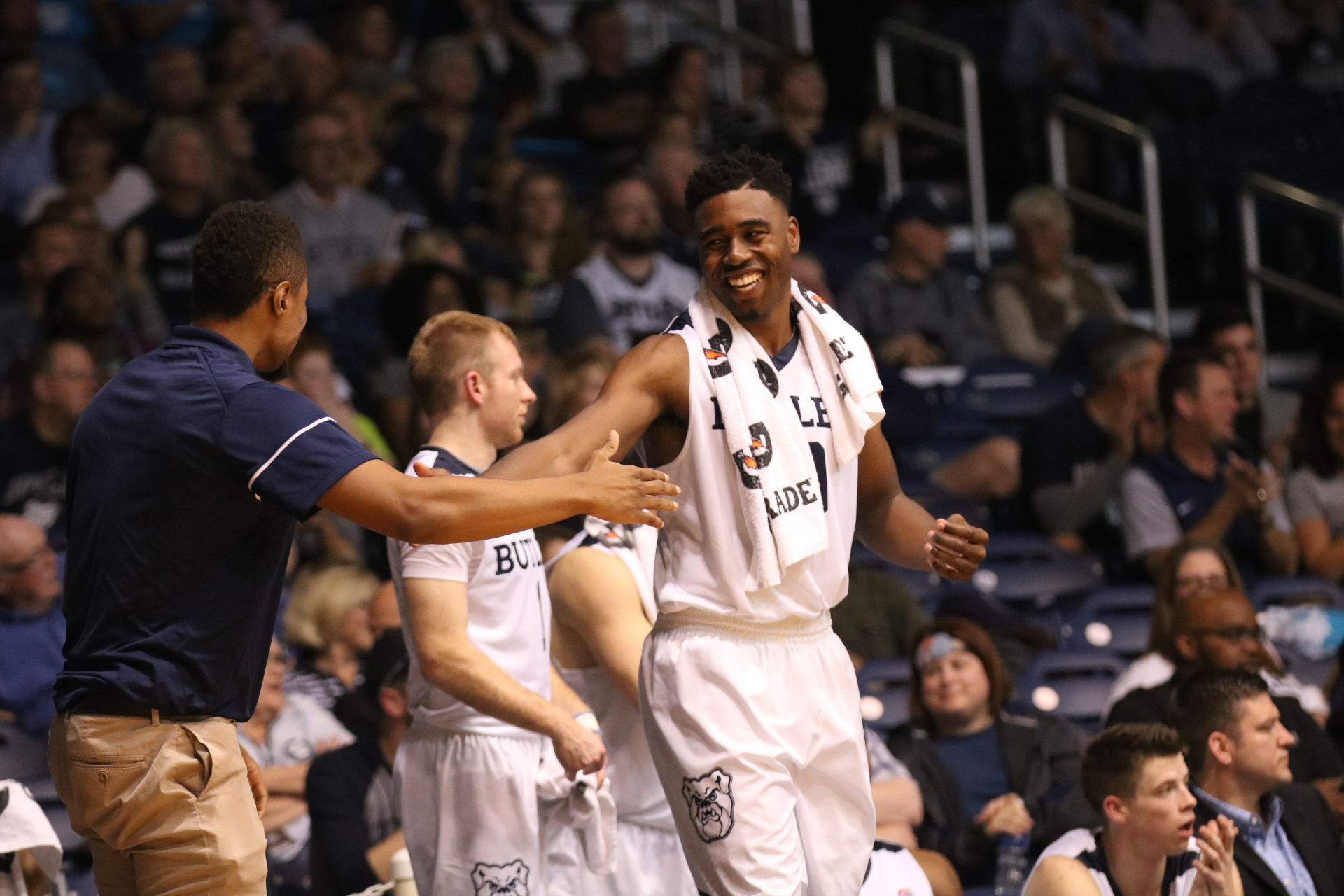 Kelan Martin slaps hands with a teammate on the bench in a game earlier this year. Martin led Butler in scoring with 19 points against Middle Tennessee. Collegian file photo.

The No. 4 seed Butler University men’s basketball team never trailed against the No. 12 seed Middle Tennessee State Blue Raiders and won 74-65 on March 18 in the BMO Harris Bradley Center in Milwaukee, Wis., to advance to the Sweet 16 of the NCAA Tournament.

Despite never giving up the lead, Middle Tennessee made things interesting with 3:40 left when they cut the score to 59-56. With all momentum shifted towards the Blue Raiders, senior forward Andrew Chrabascz drilled his first and only three point shot of the game. From that point, the Bulldogs played solid defense and knocked down enough free throws to pull out the victory.

“I mean when they find me in the sweet spot I have to be aggressive or I’m making a fault to the team, passing it out,” Chrabascz said during the post game press conference.

What a pass! #MarchMadness pic.twitter.com/5vQypbb9sH

Kelan Martin led the team in scoring with 19 points, and he grabbed six rebounds as well. Chrabascz contributed 15 points but also turned the ball over four times. Kamar Baldwin was the remaining Butler scorer in double figures with 13 points. Baldwin, Martin and Tyler Lewis each had four assists.

Butler is now 15-3 this year when Lewis dishes out four or more assists.

The win also bumps Butler’s record to 10-0 in the NCAA Tournament when they are the better-seeded team.

JaCorey Williams and Antwain Johnson shouldered most of the offensive load for the Blue Raiders. Williams led the team with 20 points while Johnson finished with 19. Williams also pulled down nine boards. Reggie Upshaw and Brandon Walters were the other two scorers in double figures with 12 and 11 points respectively.

“I thought defensively we were really solid,” Butler head coach Chris Holtmann said. “I thought our zone really helped us, kept them out of the paint some and that was important for us.”

Hot three point shooting highlighted the first half of play for Butler. As a team, they shot 6-of-9 (67 percent) from behind the arc. They led 35-22 with 4:28 left in the half but took a 36-31 lead into the locker room after Middle Tennessee went on a 9-1 run.

Butler’s tournament runs had ended in the Round of 32 in the last two years, and this is their first Sweet 16 appearance since 2011.

Butler will face the winner of the No. 1 seed North Carolina Tar Heels versus the No. 8 seed Arkansas Razorbacks on March 24 in Memphis, Tenn.

How sweet it is!