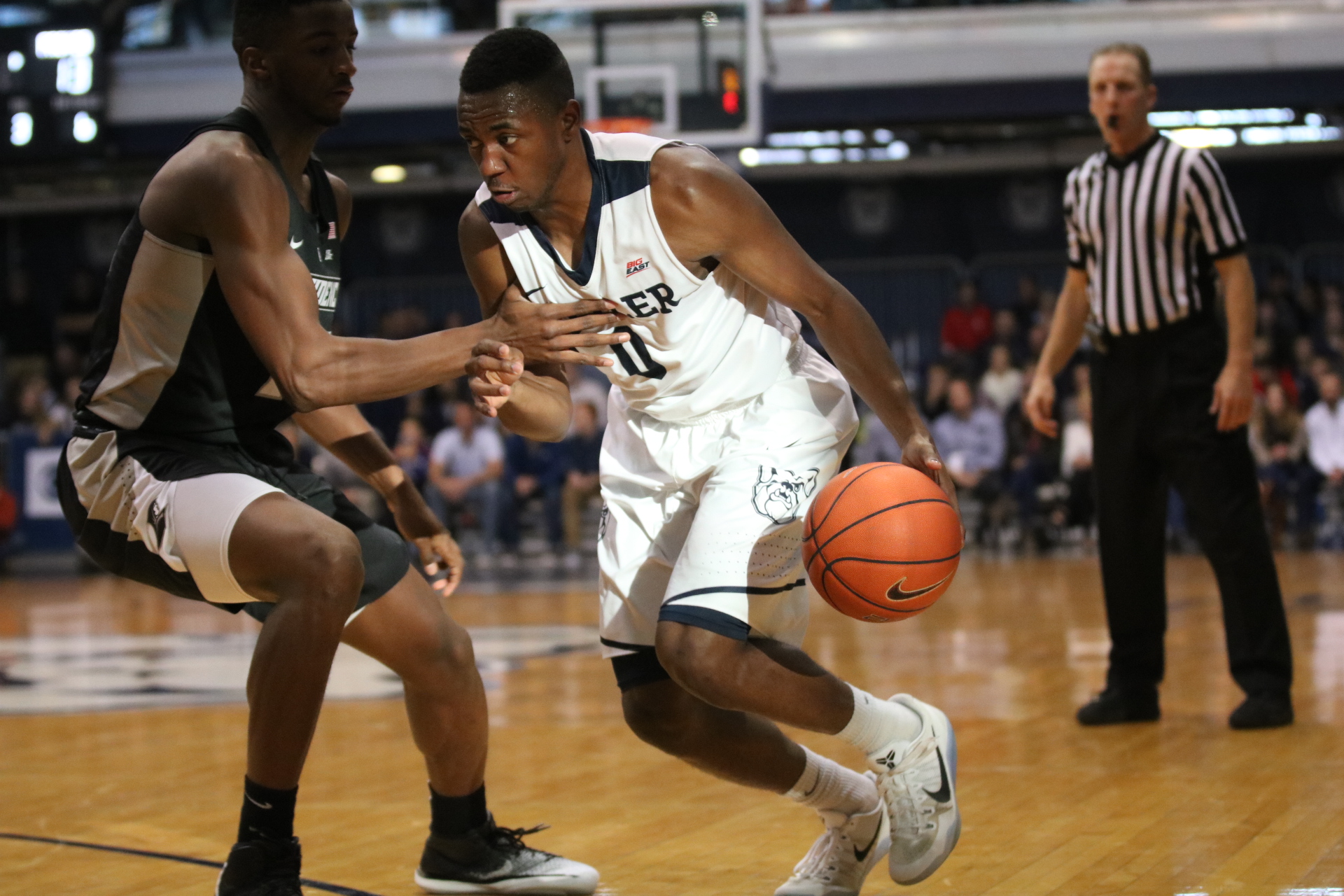 Avery Woodson drives to his left against a defender in a game earlier this year. Woodson scored 18 points on 6-of-10 three point shooting against Winthrop. Collegian file photo.

The No. 4 seed Butler University men’s basketball team took care of the No. 13 seed Winthrop Eagles 76-64 on March 16 in the BMO Harris Bradley Center in Milwaukee, Wis., to advance to the Round of 32 in the NCAA Tournament.

Winthrop shrunk the Bulldogs lead to 48-41 with 13:28 left in the second half and appeared to be poised for a comeback. Instead, Butler responded with a 14-2 run over the next six minutes of play. Tyler Lewis scored five points and dished out two assists during this stretch.

“That’s the big thing about the NCAA Tournament is that there is going to be a game of runs,” senior Andrew Chrabascz said during the postgame press conference. “Maintaining it and controlling how limited the run is, it’s important.”

Avery Woodson did most of his damage in the first half and ended with 18 points to lead Butler (24-8, No. 4 Seed) in scoring. Chrabascz and Kelan Martin were the two other scorers in double figures and finished with 12 and 10 points respectively. Martin also grabbed a team high eight rebounds. Lewis paced the Bulldogs in assists with eight dimes.

“The first half I was just the end result of great ball movement,” Woodson said. “Our playmakers did a great job of getting me open, so credit goes to them.”

Butler blew away Winthrop in the rebounding category by grabbing 42 boards as opposed to their 27. Thanks to Nate Fowler, Lewis and Martin, the Bulldogs scored 28 points of the bench compared to nine from Winthrop.

Xavier Cooks led the Eagles (26-7, No. 13 seed) in scoring and rebounding with 23 points and six rebounds. Keon Johnson, who averages roughly 22 points per game, scored 17 points. Those two provided Winthrop with the majority of their offensive in the game.

Two categories in which Butler performed below average in were turnovers and free throw shooting. The Bulldogs turned the ball over 12 times and shot 20-of-30 (67 percent) from the charity stripe.

With the win, Butler is 9-0 when being the higher seed in the NCAA Tournament.

In the first half of play, Woodson was on fire from three point range. He shot 5-of-7 from deep to end the half with 15 points and propel his team to a 41-27 lead at the half. Also in that half, Butler held the Eagles to a 35 percent field goal shooting mark while they shot 50 percent from the field.

Butler’s next tournament test will be against No. 12 Middle Tennessee State Blue Raiders. They will play on March 18 at 7:10 p.m. in Milwaukee, Wisconsin. The game will be live on TBS.