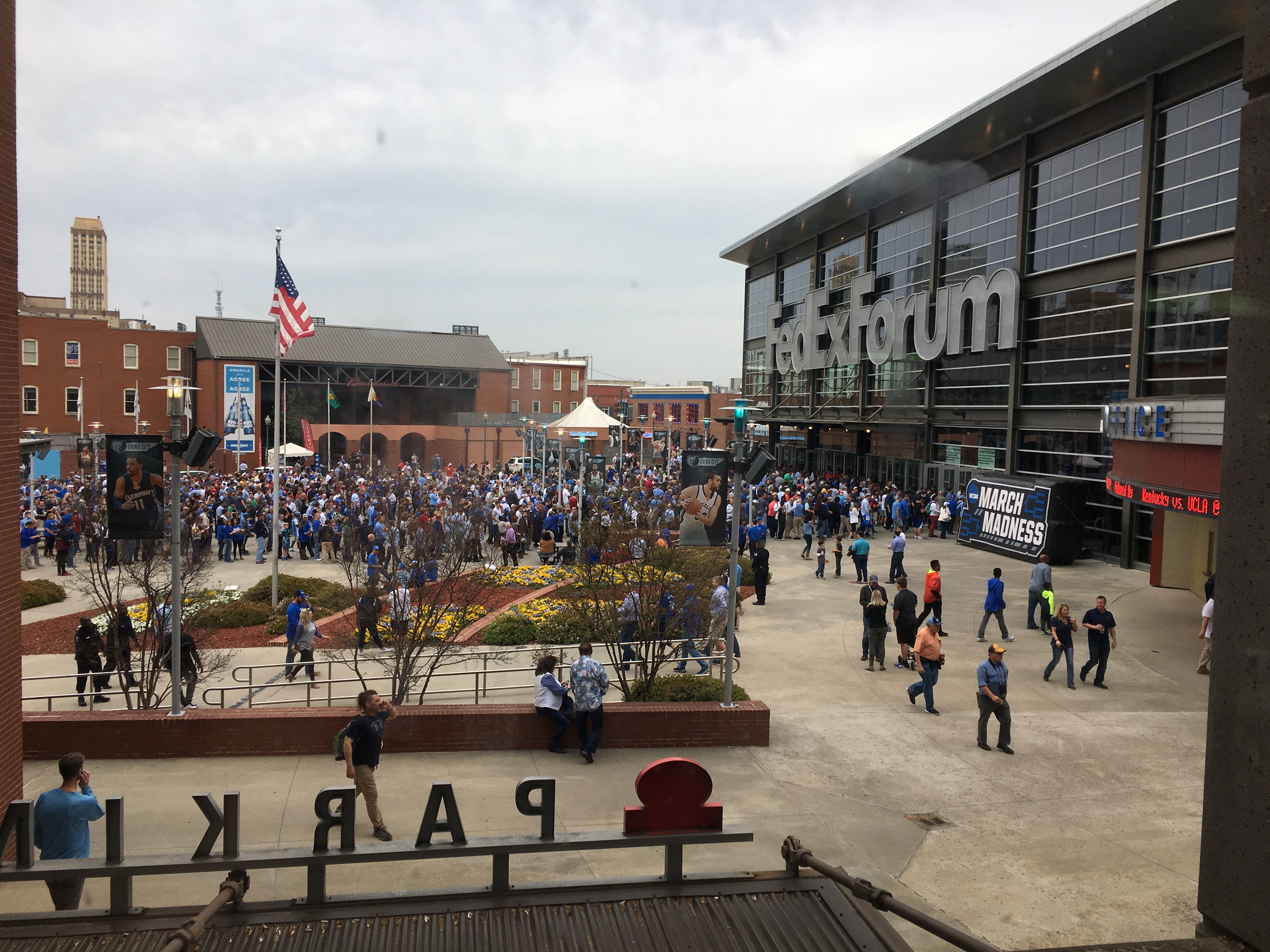 Josh Mullenix’s view of the outside of the FedEx Forum.

“Do you see any other Butler fans?”

I’m standing in line with a fellow Butler Bulldog waiting to get into the FedEx Forum in Memphis, Tennessee, surrounded by blue as far as the eye can see. Except it’s not Butler blue, it’s Kentucky, North Carolina and UCLA blue.

I have to say, the feeling isn’t exactly foreign, it’s almost… appropriate.

It’s a different feeling than I’ve had the other million times I have walked into the Forum, which is something I have done at least 30 times every NBA season for the last three years. Usually it’s the Memphis Grizzlies I’m cheering for, but this time it’s Butler.

I can’t help but think Butler fans have felt this way before in the Sweet 16, whether it was in 2010 when Butler was in the Sweet 16 with No. 1 Syracuse and No. 2 Kansas State; or in 2011 when they were there with the two, three and four seeds.

The atmosphere has a “Butler against the world” feeling, something Butler is familiar with. Whether it’s due to the fact that Butler was picked sixth in the Big East, or because it feels like Kentucky fans are about to take up 18,000 of the 18,119 seats the FedEx Forum has. Either way, the feeling seems appropriate.

Maybe we’ll get the same magic this year? The thought crosses my mind.

And then the game starts.

Not exactly the magic I was hoping for. If anything, the magic was on the side of UNC. Justin Jackson and the rest of the Tar Heels can’t seem to miss coming out of the gates.

If I’m being honest, I was crushed. I got the feeling that it just wasn’t Butler’s day way earlier than I wanted to.

And then I got a text from my dad.

“It’s awesome that you’re at a Sweet 16 game where your school is playing,” he said.

He was right. It was awesome. Nobody thought Butler would be in the Sweet 16 at the beginning of the season. It was supposed to be an off year. But instead we were treated to the third best season in Butler men’s basketball history, a year that included a clean sweep of the defending national champions and a second place finish in the Big East Conference.

Now, it was just a matter of being proud of the team I cheered for all year. Of course I wanted to see them pull out a win, but being there for them was more important. It was time to cheer as loud as I could, even if my cries would be drowned out by the cheers of other fans.

With every shot that went down, every defensive play and every steal, I was going to let people know who I had come to support. And the cool thing was, every other Butler fan in the arena was doing the exact same thing.

With six minutes left, Butler had cut the lead, a lead that had gotten up to 20, to 10. Maybe it was time for that magic. The momentum was in Butler’s favor, they had gotten a few stops, now it was time to capitalize. But it just wasn’t meant to be.

Instead of Butler cutting the lead to single digits, UNC went on a 5-0 run to stretch the lead back to 15.

At that point it was clear Butler wasn’t going to advance to the Elite Eight. It was time to cheer for our seniors one last time — Andrew Chrabascz, Tyler Lewis, Stephen Bennett, Trey Pettus, Kethan Savage and Avery Woodson.

I forget sometimes that three of these six players are transfers, and Savage and Woodson have only been on Butler’s campus since the fall. But it didn’t feel like we were saying goodbye to any graduate transfers — it felt like we were saying goodbye to six guys who had given their all to Butler basketball for four years. There is something to be said for the family that is created at Butler that gives us that feeling.

And then I’m back to Feb. 2, 2016, the first Butler basketball game I attended — watching Kelan Martin score 35 points against Georgetown and watching Chrabascz do Chrabascz things. Those seniors and the rest of the team are a big reason why I am attending Butler today.

It’s sad to see them go, and to see the season come to an end prematurely. But at the same time, I am thanking them for the season they have given us and the impact they have had on me as an individual.

The Sweet 16 was not as sweet as I had hoped for, but it’s one I won’t soon forget.

A couple days after Butler’s loss to UNC, I took in the UNC versus Kentucky showdown, and you best believe that I was still repping Butler, repping Butler ‘til the very end.

And thank you, Butler men’s basketball, for an incredible season.