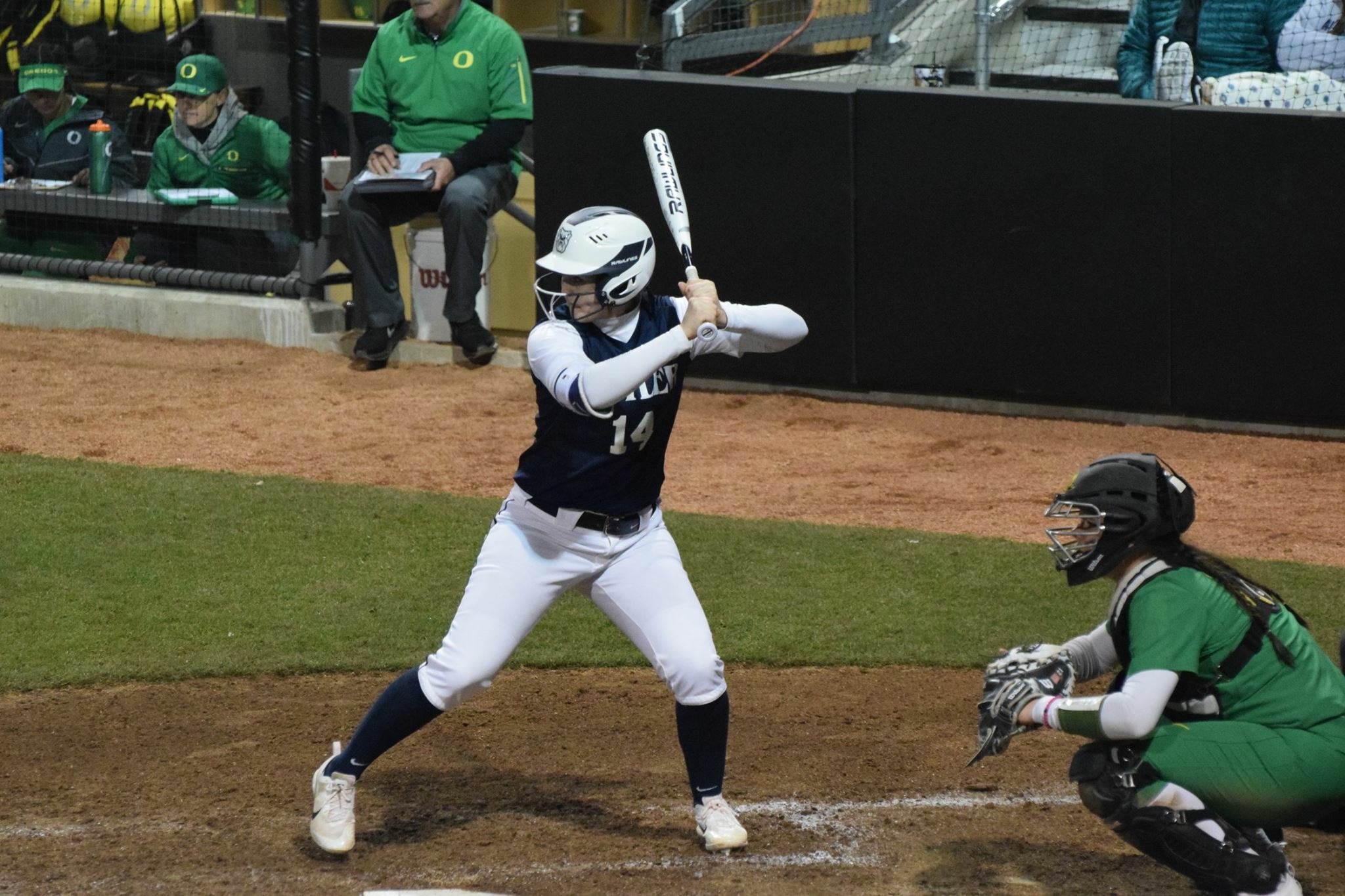 Madi Christiansen awaits a pitch in a game earlier this year. Photo courtesy of David Starwalt.

Now you see her, now you don’t. Freshman Madi Christiansen does not walk around campus; rather, she bounds from place to place, bursting with energy.

Her passion and enthusiasm for life made the transition to Butler an easy switch. The utility player hails from Etters, Pennsylvania, which is roughly nine hours away from Indianapolis.

“I realized there would be no going home on weekends or anything,” Christiansen said. “This is now my home, and this is my comfortable.”

Christiansen, who bats in the middle of the order, is batting .319 and clubbing 11 hits in 29 at-bats. She has started 14 games and has four doubles on the season.

She said she has always found inspiration from her only brother, Colin. He worked as a graduate assistant for the University of Tennessee softball team.

“We didn’t have the typical relationship siblings did in the sense that we fought,” Colin said. “We rarely ever did. We had the relationship where we supported each other, often through sport.”

Colin coached her as she worked through the rigors of high school softball. He said he is proud of his sister for adapting to a new environment.

“I would say she has transitioned pretty well on the field,” Colin said. “She has added muscle which will only help her, and she looks like she’s in the best shape of her life.”

Though she departed from her immediate family at home, she said her softball teammates have become sisters.

My inspiration.. beyond proud to call you my brother ❤️ https://t.co/23Ep44CNN9

“We are all close,” Christiansen said. “The conditioning we did in the off-season helped us bond and come together as a team. There were a lot of early mornings.”

Since she bats left-handed, she said she sought out fellow lefties Sarah Dixon, a junior outfielder, and Jenna Foreman, a sophomore outfielder, for advice on college pitchers.

“They’ve helped me a lot,” Christiansen said. “Jenna, she just gets it. They both welcomed me from the start, and I always ask them questions if I need anything.”

Christiansen and Foreman became fast friends. Foreman said her teammate’s humor has made their relationship even more fun.

“We have little ongoing inside jokes,” Foreman said. “We always say really nice or really mean things to each other, but show no emotion when doing so. It’s really funny.”

Foreman said she admires a few specific traits about her younger teammate.

“I love her work ethic and her desire to get better,” Foreman said. “When I go to get extra work with our [coaches], she is often there. That just shows how she is putting in the work to succeed.”

The two business majors share ideas and thoughts about school and softball.

“She’s just one of those people that you just know you will be friends forever with after college,” Foreman said. “Even when we are no longer teammates.”

Christiansen and the other freshman softball players live on the fourth floor of Fairview House. Freshman infielder/pitcher Kennedy Minko said Christiansen’s outgoing personality struck a chord with the squad.

“That girl does not have a shy bone in her body,” Minko said. “She brings light into our lives.”

The stress of a long season sometimes wears on teams. Minko said her friend will always come through with a well-timed joke.

“In those stressful times, she provides comic relief,” Minko said. “It’s great for the team. We’ve realized that we will all stick with each other.”

“‘A Milli” by Lil Wayne is always a good song choice,” Longest said. “When we need a study break, that’s just what we do.”

Camaraderie is at the backbone of the Christiansen family. Colin emphasized his younger sister’s positive spirit.

“She makes negative situations positive,” Colin said. “She genuinely cares about people and puts their happiness first. She has a genuinely good soul.”

The freshman had many options on her plate, but chose to eat with the Bulldogs. Christiansen said she knows she made the correct decision for herself.

“When Butler became an option, I knew it was the right one,” Christiansen said. “When I’m struggling or get homesick, my friends always find a way to distract me. They make me feel like I actually am home.”

This is how the Dawgs will open up the season! pic.twitter.com/bVoCWweF3C