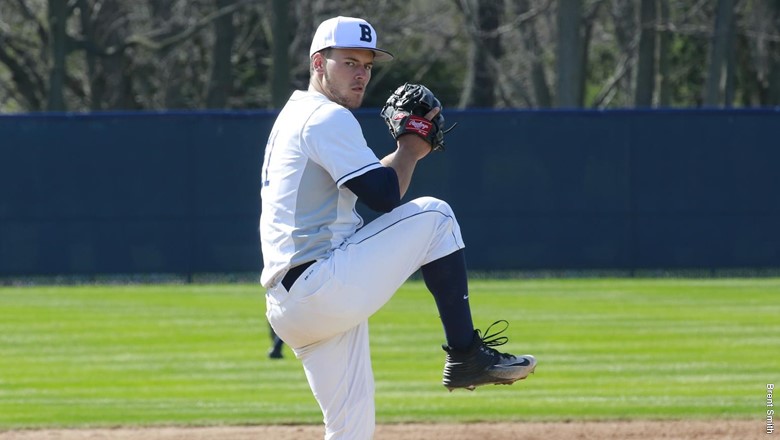 Jeff Schank prepares to send a pitch to home plate. Photo via butlersports.com.

The Butler University baseball team came out on top in each of the five games they played this week. The team is now 16-7, eclipsing their win total from all of last season.

The week started with home games against DePauw University and Lewis University March 21 and 22 respectively.

First, the Bulldogs defeated the Tigers 8-1 behind five runs in the second inning and five scoreless innings from junior Garrett Christman.

“It was great to see Garrett throw the ball as well as he did,” head coach Dave Schrage said. “It was important that he could get his breaking stuff over and hit his spots with his fastball. We’re going to play…some really good teams midweek so it’s important that we start developing our pitching staff.”

Butler followed the victory over DePauw with a 7-3 win over Lewis the next day.

The Bulldogs fell behind 2-0 in the third inning but responded with six runs in the sixth inning, three of which were forced in by walks. A total of 16 pitchers were used between the two teams.

“It’s huge for us going forward,” senior catcher Michael DiViesti said. “We had a good start and coming home and really being able to build on that is something that we can keep building forward.”

The Bulldogs then traveled to Athens, Ohio, for a weekend series with Ohio University. The first game of the series went to extra innings on March 24. Junior outfielder Cole Malloy scored the winning run in the top of the 11th inning to give Butler a 4-3 victory.

Houston was not done, hitting another home run in the second game, his fourth of the day. Freshman catcher Duncan Hewitt also homered for the Bulldogs in game two.

Butler will return to the diamond on March 28, to face Ball State University in Muncie.