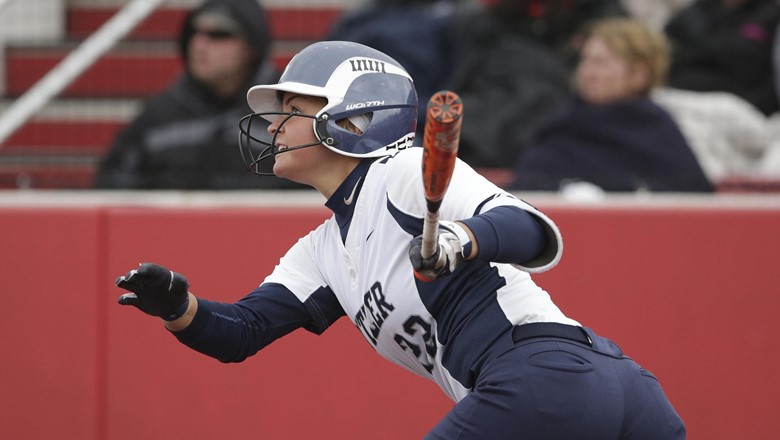 Sophomore Cheyenne Thompson follows through with her swing. Photo from butlersports.com.

The Butler University softball team split a series with DePaul University over the weekend. The final game of the three-game Big East Conference set was canceled due to weather.

The first game on March 25 made for a wild start. Butler fell 7-2, but the game lasted 11 innings. Freshman pitcher Gabbi Schnaiter took the tough loss after battling the whole game. Butler tied the game at 2-2 after redshirt sophomore Maggie MacBeth’s two-run double in the fifth inning. MacBeth, sophomore infielder Cheyenne Thompson and sophomore outfielder Jenna Foreman each had two of Butler’s 10 hits.

“We fought the entire game and never gave up,” Foreman said. “We played very competitively.”

In the second game, sophomore infielder/pitcher Kaitlin Doud picked up her third win of the season on the mound in a 7-4 victory. Senior outfielder Brandyce Sallee hit a two-run single in the fourth inning and freshman utility player Madi Christiansen followed with a sacrifice fly. Freshman catcher Christina Candotti finished off the inning with a two-run homer.

The Bulldogs will face crosstown rival Indiana University-Purdue University Indianapolis on March 28. First pitch is slated for 5 p.m at IUPUI.

“We will continue to practice with intent to improve,” Foreman said.