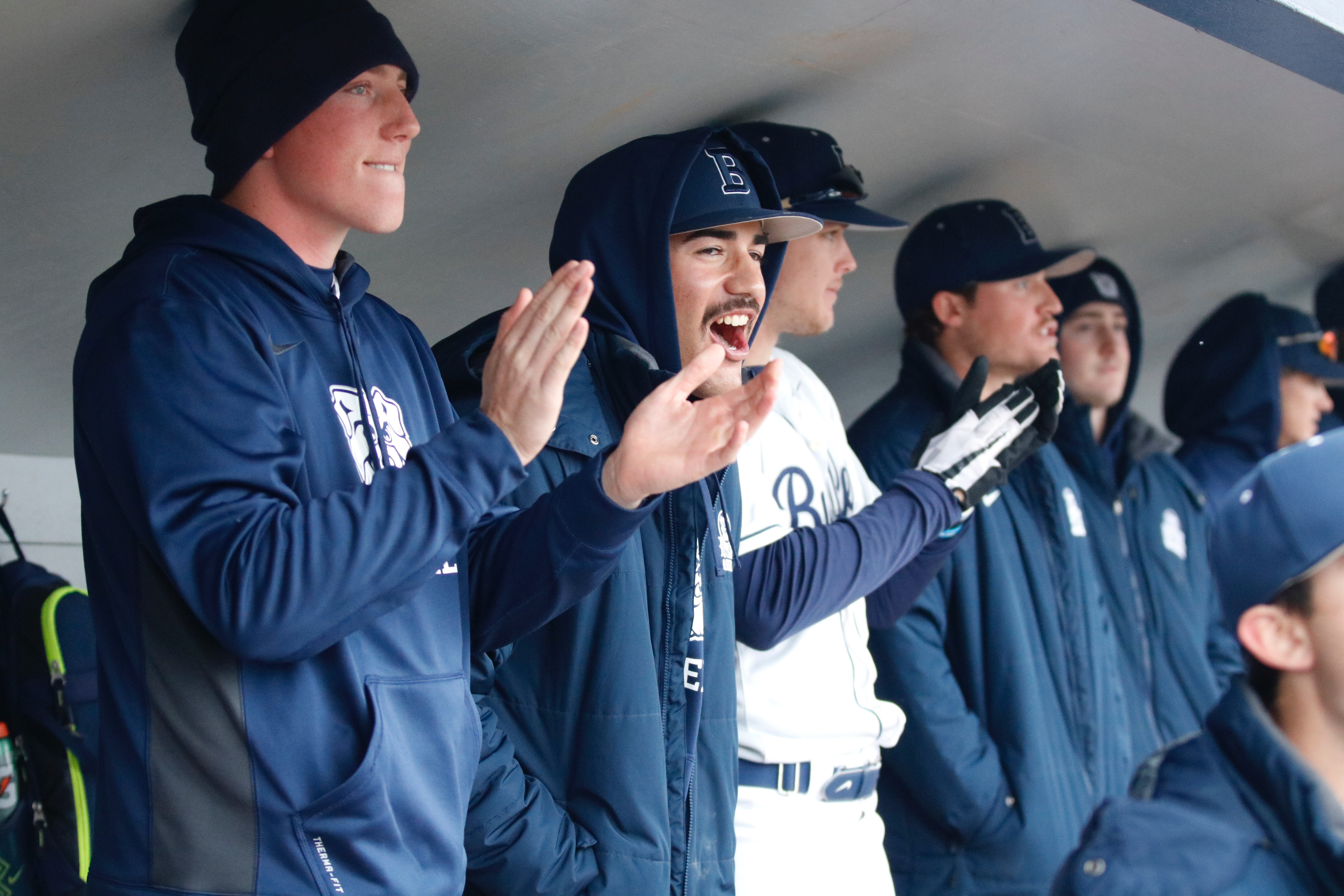 Cold baseball players huddle together in the dugout during a late winter baseball game. Photo by Jimmy Lafakis.

Butler University’s spring sports teams had to battle another opponent this past week: the weather.

Two baseball games were canceled due to the weather, and the team was forced to play several games in temperatures below 40 degrees on their opening weekend against Fort Wayne.

During the past week, other sports were forced to move inside for practice to avoid the elements. Fortunately, the weather cooperated for Butler track and field to host their only invitational of the year, as well as a three-game series for baseball to host Saint Louis University. Though women’s lacrosse is traditionally an all-weather type sport in which games are rarely canceled due to cold weather, the team had amicable weather to begin their season as well.

Decisions to play or not play games involve both the visiting coach and the home team. The NCAA has no official rules regarding the weather’s effect on gameplay. For baseball head coach Dave Schrage, it is a complicated process.

“There’s nothing more agonizing than trying to read the forecast and try to make a decision,” Schrage said. “So many times you’ll call the game and then three hours later think, ‘We could’ve played.’”

During February, teams benefitted from the unseasonably warm 50- and 60-degree days. That meant playing outside for baseball and softball in times that normally would not be possible. Baseball not only practiced at home, but also went to Bishop Chatard High School, Grand Park in Westfield and the Indianapolis Colts indoor practice facility to prepare for the season. Also, both teams begin their season playing in the southern part of the country.

“There’s no question in my mind the reason we’re off to the start that we are is because we were able to practice outside,” Schrage said. “No doubt.”

Athletes must also prepare mentally and physically for the weather. The cold weather will cause muscles to tighten, increasing the risk of injury. In order to combat this, athletes need to spend more time stretching and warming up. Freshman pitcher Ryan Pepiot was scheduled to start on March 11 against Fort Wayne. However, due to the game being canceled, he was forced to wait until the next day to pitch.

Pepiot, from Westfield, said he’s used to the cold weather from high school. He has a plan for staying warm in the cold, which includes throwing inside before a game and keeping layers on until it’s time to pitch.

The weather does not affect all spring sports. The tennis teams continue to play in the Butler Bubble and the softball team has yet to play at home this year. For Pepiot, he said he is prepared for any type of weather to come the rest of the spring.