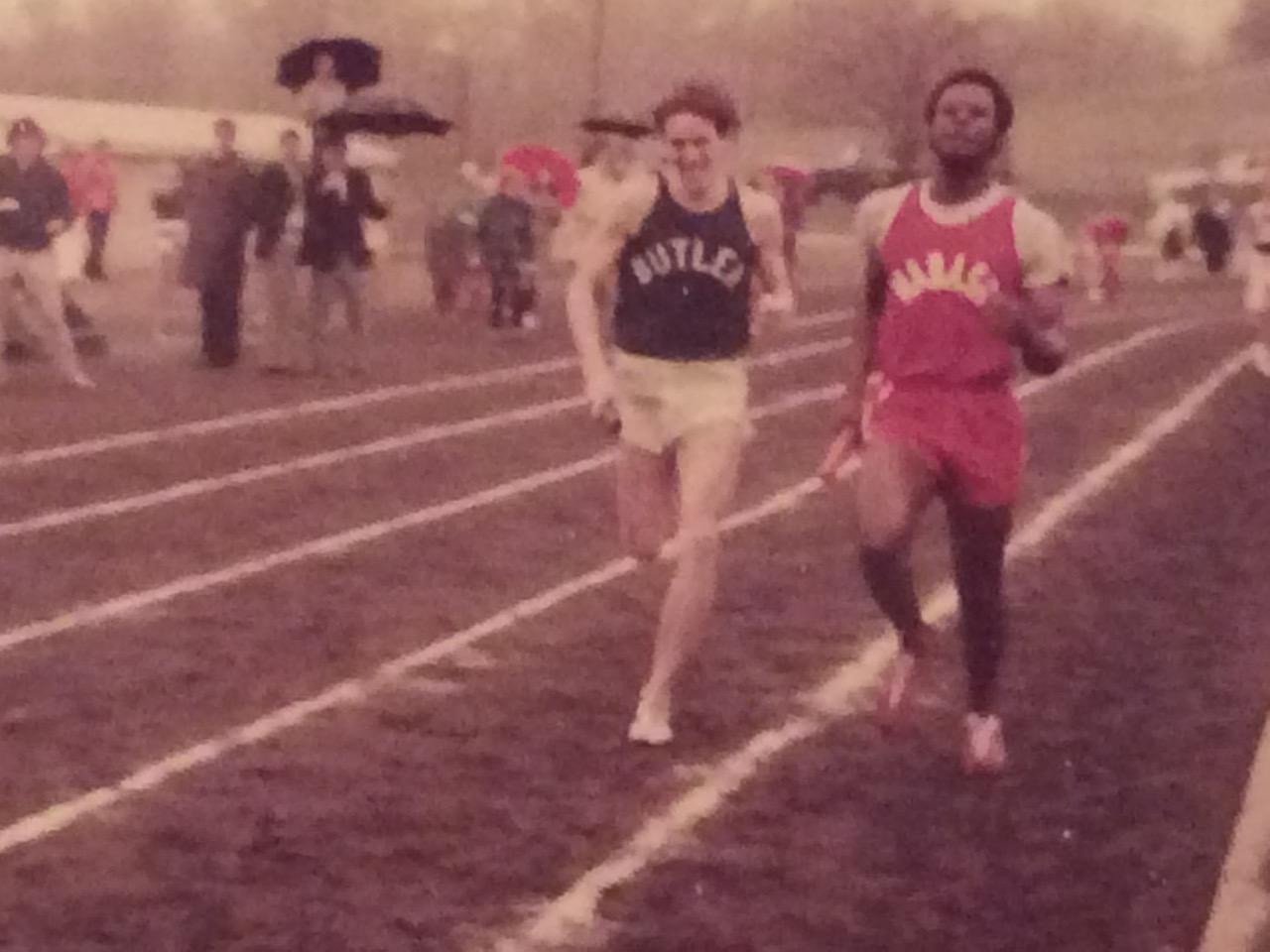 Thom Burleson (left) runs next to a competitor while running for Butler in the 1970s. Photo provided by Thom Burleson.

This is the latest installment of the “Where are they now” series that highlights memorable sports figures in Butler’s past. Throughout the semester we will continue to find those that made Butler’s athletic history so important. You can read archived stories from this series on our website.

An extra stride here, an extending straightaway there — this natural compulsion to strike forward and watch the ground yield beneath his feet. Nobody was running like Thom Burleson ’74. His Chuck Taylors echoed patterns over the track’s surface, beating a rhythm over the hum of his breath.

“I’ve seen you out there,” Bennet told Burleson. “You ought to consider running cross country, because you’re getting your brains beat in playing football.”

Following Bennet’s suggestion, Burleson joined track his last two years of high school. That football workout on the track was the inception of everything.

He received a scholarship at Butler University was a three-time cross country MVP. He set school records in the 800 meters, one-, four- and five-mile races. He qualified for the 1976 and 1980 Olympic Trials. In 2001, he was inducted into Butler’s Athletic Hall of Fame.

Beginnings are humble. Burleson still has them tucked away somewhere, his first pair of Adidas spikes. His first several months running, he laced up the same pair of Chuck Taylors he wore to football — even ran his first meet in them.

“You have a real future in this sport,” Bennet said. “We need to get you some real gear.”

Adidas offered one of the only options, a laughable concept today made more ironic by Burleson’s career choice. Three decades later, he became a co-founder of the Athletic Annex, a running speciality store in Indianapolis and Broad Ripple.

“Ultimately,” Burleson said, “the genesis of that goes back to those shoes, when I was some silly 15-year-old in high school who knew no better than to wear Chuck Taylors.”

Now, he will spend an hour, maybe two, making sure people are fitted with the right shoes. Butler track runner Keigan Culler worked at the Athletic Annex for two years, where customers asked for Burleson by name.

“He’s going to give everyone his full attention with every interaction,” Culler said.

The Broad Ripple location is referred to as “The House.” Customers come in like regulars, and during slow mornings, sit outside the porch talking, baked goods and coffee in hand.

“I see these people, and they’re all heroes to me,” Burleson said.

One woman is part of a training group the Athletic Annex holds off the Monon Trail. A cancer survivor, she’s running faster in her fifties than when she was 20.

Burleson knows all about running’s highs and lows.

He missed qualifying for the 1976 and 1980 Olympics in the 5000 meters. He was on the start line with Frank Shorter, gold medalist in the 1972 Olympic marathon. To his left, Marty Liquori. Only months before, Liquori was on the cover of Sports Illustrated.

“Once you get going,” Burleson said, “you realize they’re people just like you are.”

After the 1976 Trials, Burleson got a phone call. A promoter working for Nike wanted to sponsor him. A week later, a UPS truck pulled up and unloaded a dozen training shoes, competition spikes and gear.

The growing success of Nike followed Burleson to the Athletic Annex. Tomorrow night, Nike will sponsor Spike Night at the Athletic Annex located in Indianapolis. At the event, high school kids can buy discounted spikes from 4-8 p.m.

All track spikes have arrived & available at our 86th st location! Nike, Under Armour, Saucony, and New Balance so come and get em! pic.twitter.com/X0pI2FtZxB

People used to squint at the logo swishing across Burleson’s jacket and shoes. “What’s Nike?” They’d pronounce it wrong, foregoing the last syllable. “Nik?” This was before the brand became a national icon.

In 1978, he moved to Eugene, Oregon, to train for the 1980 Olympic Trials and started running for Nike’s Athletics West, one of the first running clubs formed for professional runners.

There are twinges of nostalgia to it all. Some mornings, Culler watched Burleson sift through photos out of a shoebox, bridging time with stories. Some photos captured the clock as runners crossed the finish. They were clocking in world-class times.

Some races were better than others. But Burleson didn’t believe in bad races, or bad days. Now a coach to several local elite runners, he abides by the same practice — focusing on the positives.

When Olympic Trial qualifier Erin Vergara missed the Olympic marathon cut in 2012 and 2016, Burleson was steadfast at the finish, the same way he stood on the Monon Trail sipping coffee during her 6:00 a.m. warm-ups.

He was there for that 20-mile run one winter, biking by her side when Vergara begged for company, only telling her how numb his fingers were after the run. Burleson was one of the first people Vergara told when her husband was diagnosed with cancer.

“He’s been my go-to person through the bad days, the good days, the highs and lows of cancer, a shoulder to cry on and celebrate with,” she said.

Burleson created a list once. A list of people, who, if they called at 3:00 a.m, he would do whatever they needed, no questions asked. Almost all of them are people he has met through running.

He pursued running as much as running pursued him. It became his business, his career, a way to approach life.

At Butler, he was reading running books, studying the way one might for class. His mileage increased from 35 miles a week to 90-100 miles. His fraternity brothers in Lambda Chi Alpha knew him as the nut who was out running at 6 a.m.

“I decided that if I’m going to do this, I need to really research this more and figure out what real training is all about,” Burleson said.

His times plummeted and he never looked back.

“It’s been analogous to how you want to live your life,” Burleson said. “There’s a very clear and positive thing about working hard and seeing the result.”

Runners can’t afford to be sentimental about shoes. They’re cherished and loved — it’s the only equipment the sport requires. But the affair is quick and sweet — 300 to 500 miles later and it’s on to the next pair.

But it’s hard to let go of that first gliding sensation down the track.

So it lingers. It lingers along a track’s sloping curves, and photos kept in shoeboxes; measured breaths sustained over straightaways and a first pair of Adidas spikes tucked away. It lingers in the mind, a single image of a high school kid flying down the track for football practice in Chuck Taylors.