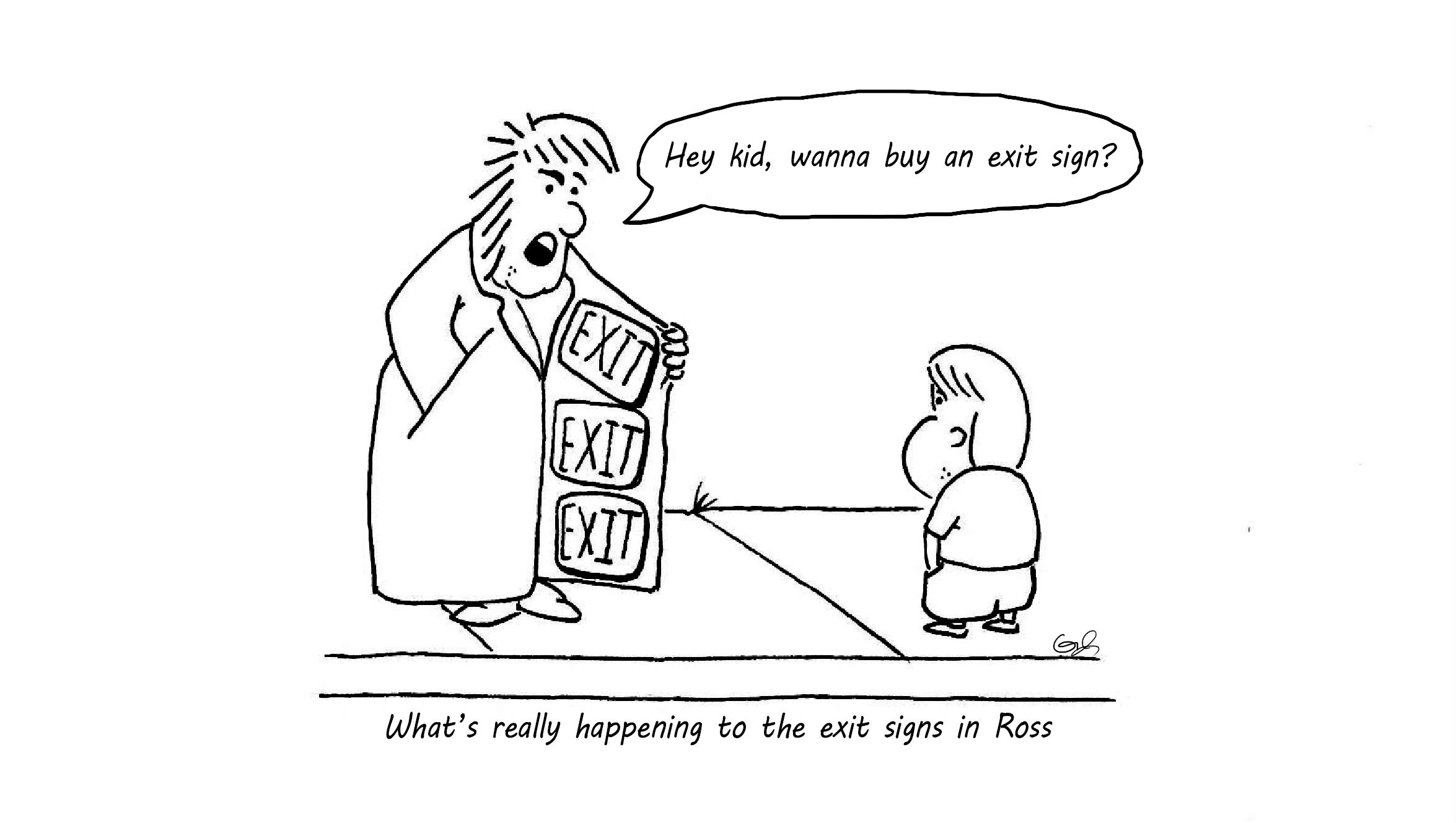 There is a very memorable line in Christopher Nolan’s “The Dark Knight” when Alfred, played by Michael Caine, is explaining the Joker’s motives to Bruce Wayne.  He says, “some men just want to watch the world burn.”

That quote from “The Dark Knight” reflects the plague of the disappearing exit signs.

Since Welcome Week, Ross Hall has been plagued by the disappearance of exit signs, especially on the basement and first floor.

Seth Wells, senior sports media major, remembers the exit sign he lived closest to and how it was stolen every two to three weeks.  Wells doubts that residents stole the signs because of personal motives or a strong desire for exit signs.

“I don’t think [residents] feel the need to steal one,” he said. “I think they just know they are unlikely to get caught and it is probably viewed as a decorative item for their rooms somehow.”

“I think people see it as pure amusement,” Maynard said. “It is also likely they may think it looks cool in their dorm room.”

When asked if knocking down an exit sign was a coping mechanism for the stress of college, Maynard said no.

“I do not see that as a valid reason to punch one down,“ he said.  “We have great facilities like the HRC to relieve stress in a positive, less-destructive way that does not cost your fellow residents any money.

Katherine Coats, Residence Life Coordinator for Ross Hall, sent an email to all 550 students living in Ross to address the issue. The email warned students that everyone might have to split the charges in order to pay for the damages since it remains unknown who has been tearing down the signs.

“If a student is found responsible for this type of damage, they will be charged for the damages and held accountable for their actions,” the email said.  “This can include a conduct meeting, possibly a referral to Marion County court and financial responsibility for the damaged sign.”

The email, which was sent on Nov. 10, has done little, if anything, to improve the enforcement of Ross Hall’s vandalism policy.

Exit signs continue to get stolen, which will only raise the potential fee. Shelby Lyles, a first-year strategic communications major, is displeased with the prolonged vandalism.

“It is just obnoxious,” Lyles said.  “We were asked not to do it, plain and simple.  It is unfair to the people who continually have to come in and fix the signs [and]  to the rest of the residents who have to pay for something that only a few people are doing.”

It is difficult to think of an alternative way the damages could get paid off.  Seeing as how it is impossible to point fingers until an offender is identified, it seems like the only solution, though unjust, is to make everybody suffer by having to pay.  *Waiting on a response from Katherine Coats, Building Supervisor, on what students will be charged*

It will take more than just an email to keep the exit signs from being torn down, but solutions are finite and expensive.  The easiest way to decrease the vandalism rates of exit signs would be installing surveillance cameras by each exit, but it is unlikely Ross will be receiving such an upgrade with the building is getting torn down in the next couple of years.

It is safe to assume Butler’s next residence hall will have the proper resources to save more exit signs, but, until then, Ross students should start putting aside some money and show some Ross love by preserving their exit signs.