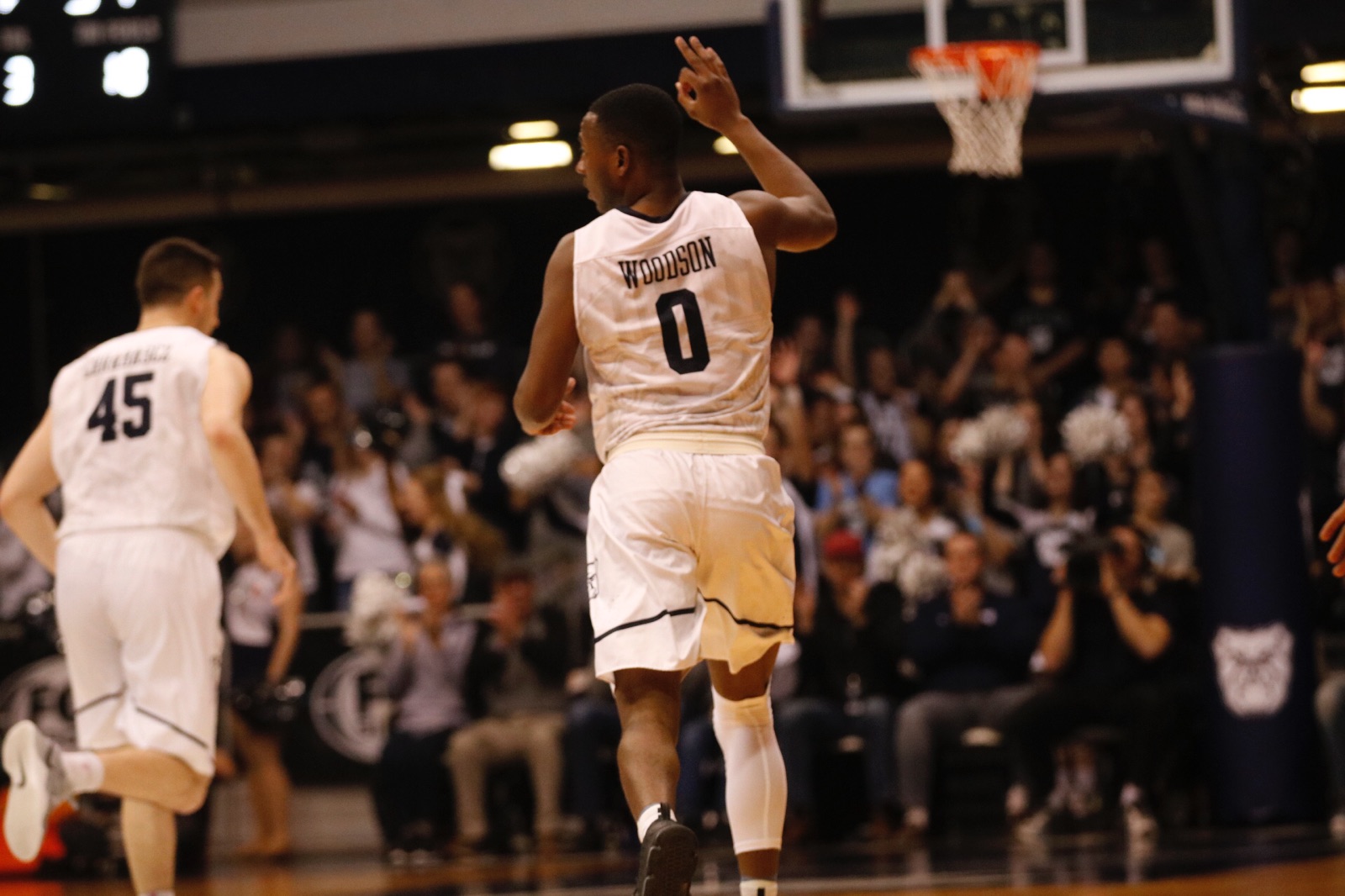 Avery Woodson signals a three pointer while running back on defense. Woodson was 6-of-10 from deep and scored 20 points. Photo by Jimmy Lafakis.

A 110-86 win for the No. 24 Butler University men’s basketball team over the St. John’s Red Storm on Feb. 15 at Hinkle Fieldhouse pushed the Bulldogs from fourth to second place in the Big East standings.

“We certainly had a good feel for how they were going to defend us,” Butler head coach Chris Holtmann said. “But I think we are getting better at understanding the tempo we need to play, and we’re really just trying to get our team’s best shot each possession. If they are so extended that our team’s best shot is a wide open three because they’ve had to over help then we are going to take that.”

Avery Woodson and Andrew Chrabascz led the way for Butler with 20 points each. Woodson shot 6-of-10 from three point range. Kelan Martin, Tyler Wideman and Kethan Savage all reached double figures as well with 19, 14 and 11 points respectively.

“They are a great shot blocking team, and they are coming at the rim and that frees him [Wideman] up to clean stuff up,” Holtmann said about his center’s double double performance tonight. “He did a great job with that.”

The Bulldogs put 110 on the scoreboard in Wednesday's win over St. John's. Here are some of the highlights. pic.twitter.com/2eTiXIRGzC

Officials called a total of 53 fouls on the night, which facilitated the high scores as well as the long length to the game.

One slight cause for concern on an otherwise flawless offensive performance from the Bulldogs was the 13 turnovers they committed. The guards for St. John’s were able to pressure Butler’s guards from time to time and force a steal.

Federico Mussini scored 20 points for the Red Storm while Shamorie Ponds finished just behind him with 18. Bashir Ahmed and Marcus LoVett each ended with 15 points.

The victory provided Butler with its 11th 20-win season in the last 12 years.

Butler will be back in action on Feb. 19 at 1:30 p.m. in Hinkle Fieldhouse against the the DePaul Blue Demons. They needed every second of overtime to beat the Blue Demons 70-69 on Jan. 21 in Rosemont, Ill. at Allstate Arena. The game will air on FS1.