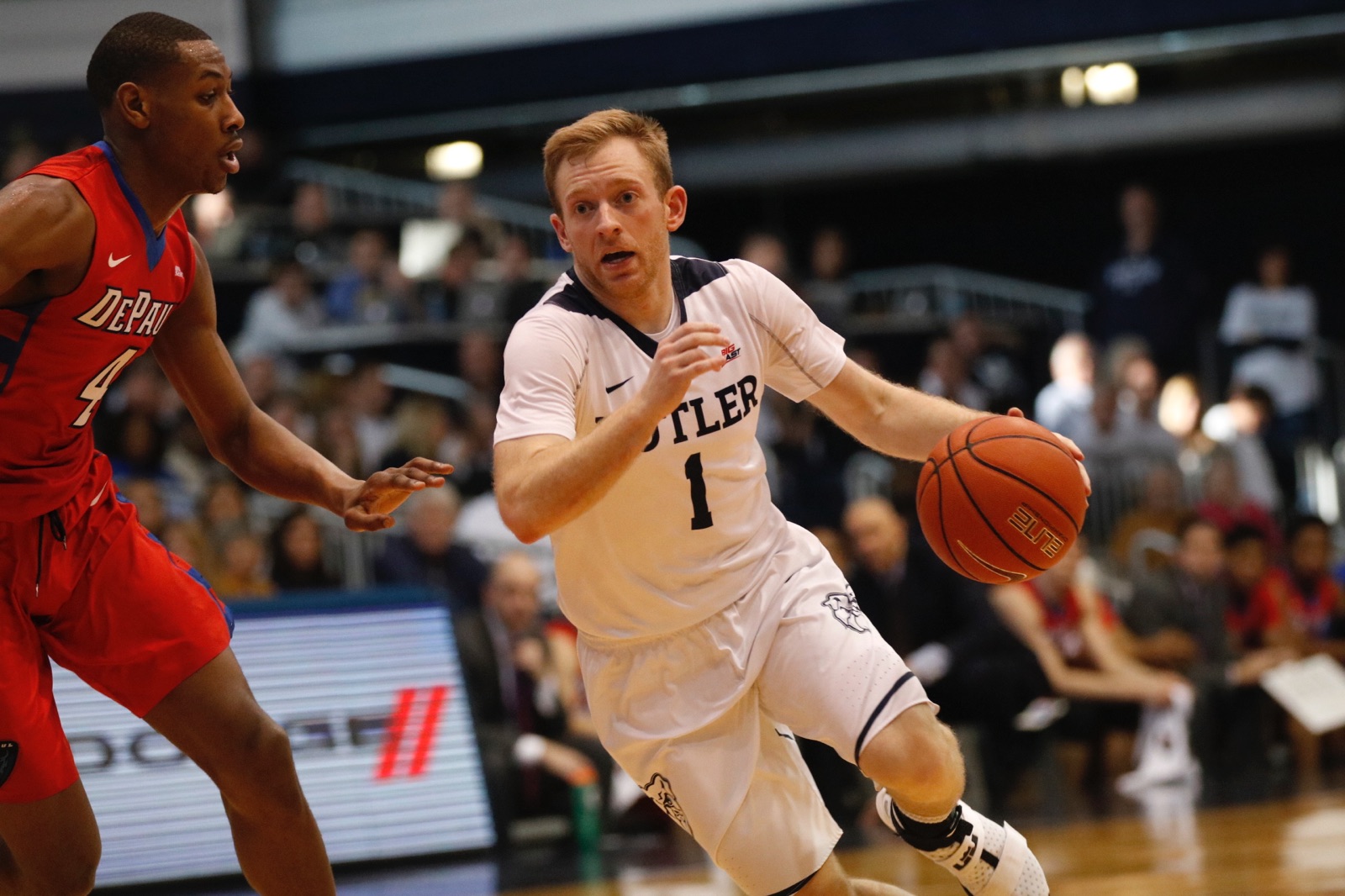 Tyler Lewis drives to his left against a DePaul defender. Lewis finished with 10 points and eight assists. Photo by Jimmy Lafakis.

The No. 24 Butler University men’s basketball team ran the DePaul Blue Demons out of Hinkle Fieldhouse on Feb. 19 by the score of 82-66.

The turning point in the contest occurred during a 21-0 Butler (21-6, 10-5 Big East) run towards the end of the first half and continued into the second half. After that run, the Bulldogs remained in complete control of the game. They also controlled the paint during the contest, outscoring the Blue Demons 46 to 24 inside.

“We have a variety of guys that can step up and I think lead on occasion, and they’ve done that,” Butler head coach Chris Holtmann said. “I’ve always said players win games, particularly this time of year they do.”

Nate Fowler led Butler in scoring with 15 points, 12 of them coming in the second half. Kelan Martin scored 14 points and grabbed a team high eight rebounds. Avery Woodson and Tyler Lewis were the other two Bulldogs in double figures with 12 and 10 points respectively. Lewis also led the team with eight assists.

“I learned from that situation, and I came in practice, and I started dominating on both ends,” Martin said after the game about his recent struggles and sitting out the first half against Marquette. “[I’m] trying to impact the game in a variety of ways and it’s not going to come over night.”

Martin said his confidence increased as he poured more focus into defense and rebounding and then the offense followed from there.

Bulldogs improve to 10-5 in BIG EAST play with 82-66 win over DePaul in front of another sold-out Hinkle Fieldhouse crowd. Highlights –> pic.twitter.com/CrH7caFkQM

For DePaul (8-19, 1-13 Big East), Eli Cain paced all scorers with 24 points and pulled in six rebounds. Joe Hanel was the only other Blue Demon in double figures with 10 points.

Butler’s bench contributed 44 points as opposed to DePaul’s 17 points. As a team, the Bulldogs shot 57 percent from the field.

With the victory, Butler has won seven games in a row against DePaul and is 7-0 under Holtmann when facing the Blue Demons.

The win allowed the Bulldogs to sweep the regular season series after beating the Blue Demons 70-69 in overtime on Jan. 21 in Rosemont, Ill. at Allstate Arena.

Compared to their last outing against the Blue Demons, Butler’s first half was significantly sharper. The Bulldogs ended the first half on a nearly five minute 14-0 run to take a 36-27 lead into the locker room. Woodson drained four three pointers in the half to contribute 12 points.

Butler’s next test is on Feb. 22 in Villanova, PA against the No. 2 Villanova Wildcats. The Bulldogs will aim to sweep the regular season series after beating the Wildcats 66-58 when they were ranked No. 1 on Jan. 4 in Hinkle Fieldhouse.

Different look to Hinkle today, but the first guy on the court remains the same… pic.twitter.com/fpW6IZjSVJ