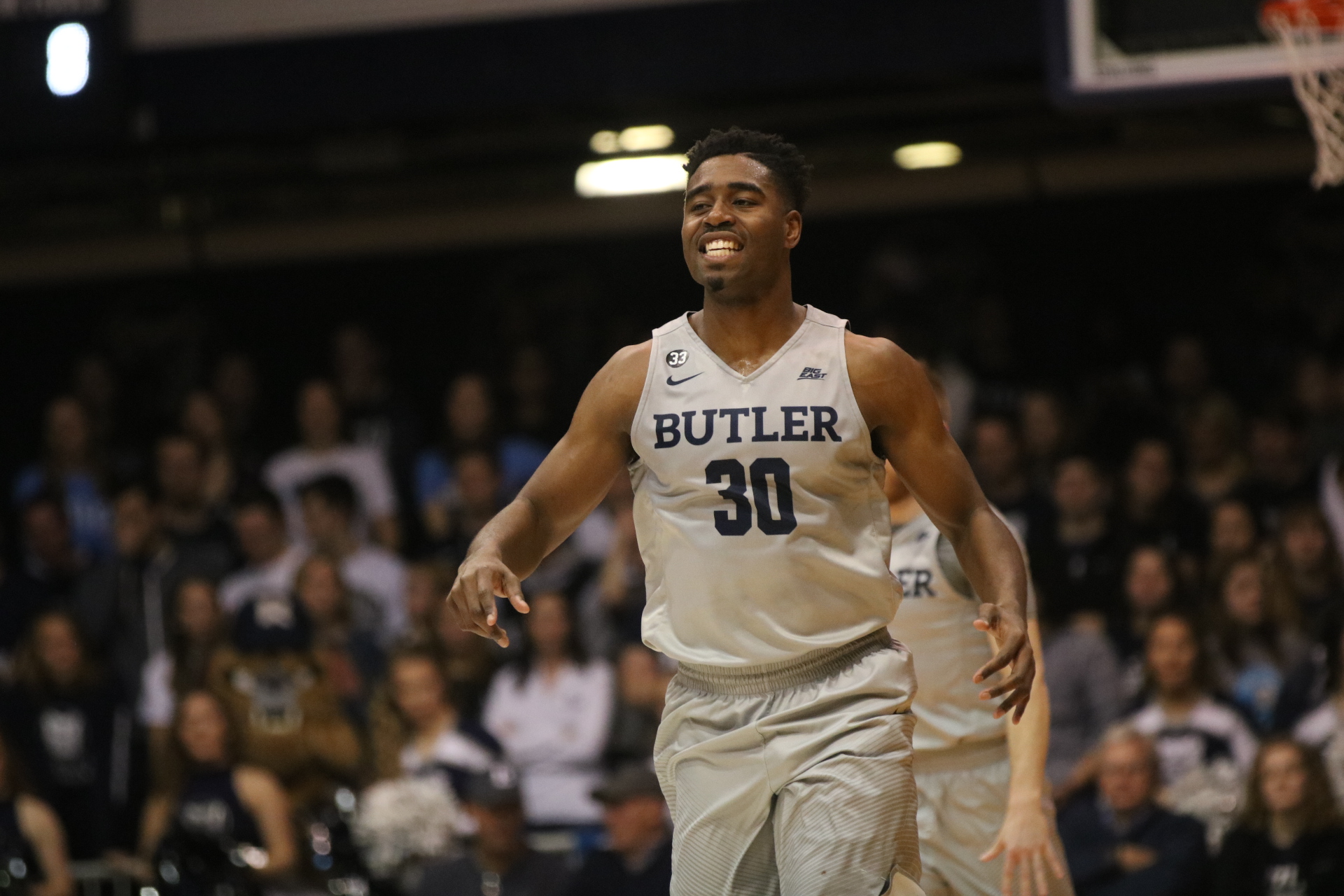 Kelan Martin smiles as he gets back down the floor in transition in a game earlier this year. Martin finished with 22 points and eight rebounds against Villanova on Feb. 22. Collegian file photo.

The No. 22 Butler University men’s basketball team beat the No. 2 Villanova Wildcats 74-66 on Feb. 22 in the Pavilion in Villanova, PA. The Wildcats had won 48 straight games in that building before this loss.

Martin led Butler in scoring and rebounding with 22 points and eight rebounds. Kamar Baldwin and Avery Woodson were the other two players in double figures with 15 and 13 points respectively. Andrew Chrabascz dished out a team high eight assists.

Martin has continued to get back to his high scoring ways after a below average stretch a few weeks ago, and Butler head coach Chris Holtmann said he thinks Martin will “continue to make big strides” when talking to FS1’s Bill Raftery after the game.

The team’s faired similarly in the rebounding and turnover categories. Butler (32) grabbed one more rebound than Villanova (31) but committed one more turnover (16) compared to 15 Wildcat turnovers.

The Bulldogs shared the ball effectively and racked up 21 assists compared to Villanova’s eight assists.

Leading Villanova was the duo of Jalen Brunson and Josh Hart. Brunson led all scorers with 24 points and Hart poured in 18. Hart also snagged six rebounds.

In the first half of play, the teams committed a combined 17 turnovers and shot poorly from three point range. Butler was in control of the majority of the low scoring first half, but Villanova gained momentum and took a 29-28 lead into the locker room.

Seniors on Villanova had also never lost in the Pavilion until Butler’s victory. The win completed Butler’s regular season sweep of the Wildcats after they defeated them 66-58 in Hinkle Fieldhouse on Jan. 4. Two of the Wildcats’ three losses this year have been to the Bulldogs.

Butler will be back in action on Feb. 26 in Cincinnati, OH at the Cintas Center against the Xavier Musketeers. The game is set to start at 3:30 p.m. and will be aired on FS1. A win for the Bulldogs will accomplish a sweep of the regular season series after they beat the Musketeers 83-78 on Jan. 14 in Hinkle Fieldhouse.