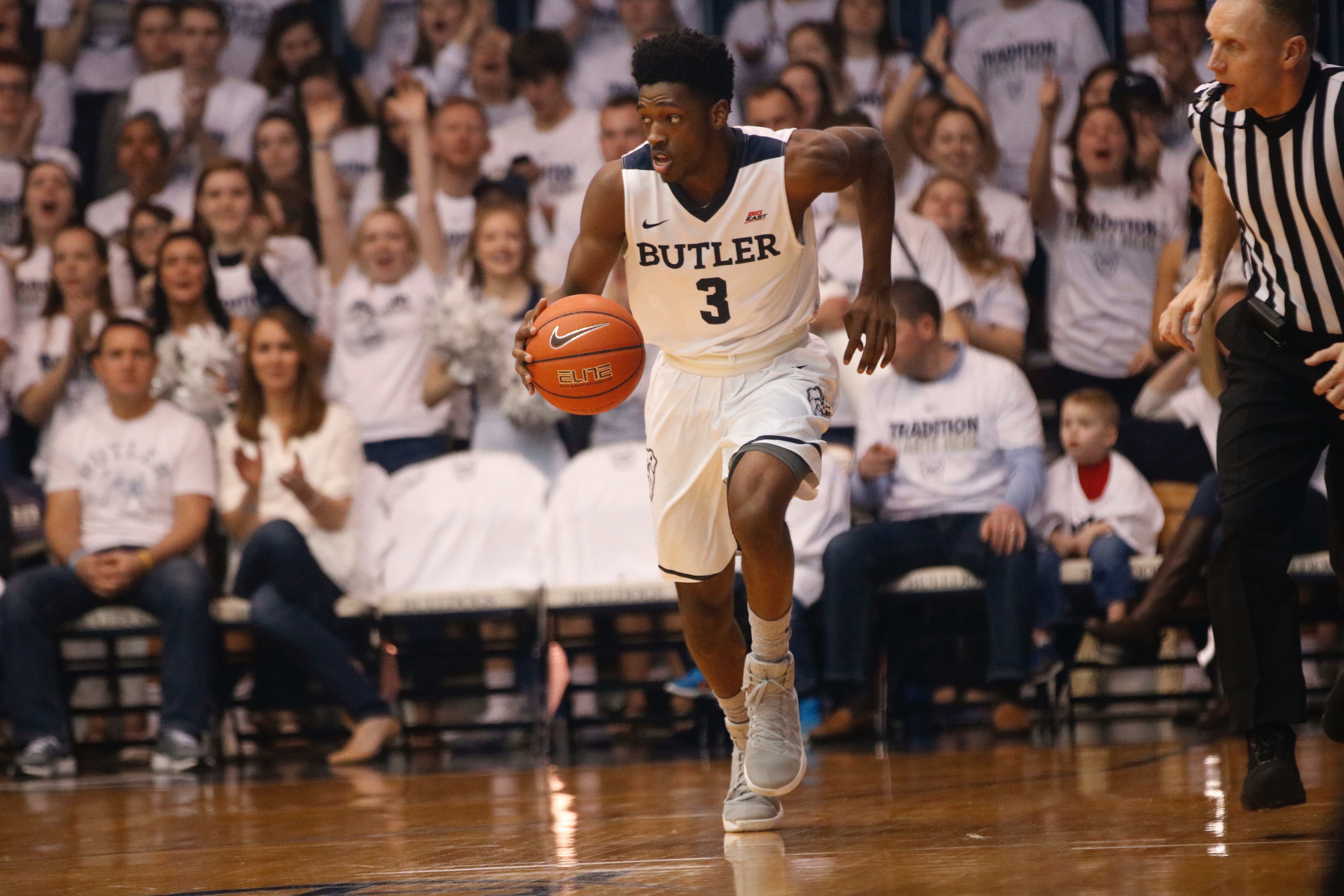 Kamar Baldwin dribbles up the court in a game earlier this year. Baldwin finished with 17 points, five steals and five rebounds against Xavier on Feb. 26. Collegian file photo.

The No. 22 Butler University men’s basketball team swept their season series against the Xavier Musketeers after winning 88-79 on Feb. 26 in the Cintas Center in Cincinnati, OH.

In the last eight minutes of play, Kamar Baldwin and Kethan Savage combined for five steals, which led to easy points, to allow the Bulldogs (23-6, 12-5 Big East) to pull away from the Musketeers (18-11, 8-8 Big East).

Kelan Martin led all scorers with 25 points in 29 minutes of action. He also led the team in rebounding with seven boards. In addition to his steals, Baldwin scored 17 points and pulled down five rebounds. Andrew Chrabascz scored 11 points and dished out a team high six assists.

Bulldogs with an explosive second half and ultimately "X" out Xavier for an 88-79 win! pic.twitter.com/MbTIRDE9aL

One minor cause for concern for Bulldog fans is that Xavier out rebounded Butler 33 to 26.

Trevon Bluiett paced Xavier in the scoring column with 21 points. J.P. Macura netted 17 points. Malcolm Bernard and Quentin Goodin were the other two Musketeers in double figures with 13 and 11 points respectively. Goodin had a team high seven assists but six turnovers as well.

The first half featured seven lead changes. Baldwin hit a pull up jumper just inside the three point line at the buzzer to give Butler a 38-37 lead after the first 20 minutes. A notable stretch in the half occurred when Martin scored 10 points in less than two minutes; he finished the half with 12 points.

The win caps off an impressive week of play for Butler. They beat No. 2 Villanova on the road as well earlier in the week.

Butler’s last regular season game of the year is against the Seton Hall Pirates on March 4 in Hinkle Fieldhouse. The game will tip at 2:30 p.m. and air on FOX. Butler seniors will be recognized after the game. In their last meeting with the Pirates, the Bulldogs won 61-54 on Jan. 25 due to stout defense.