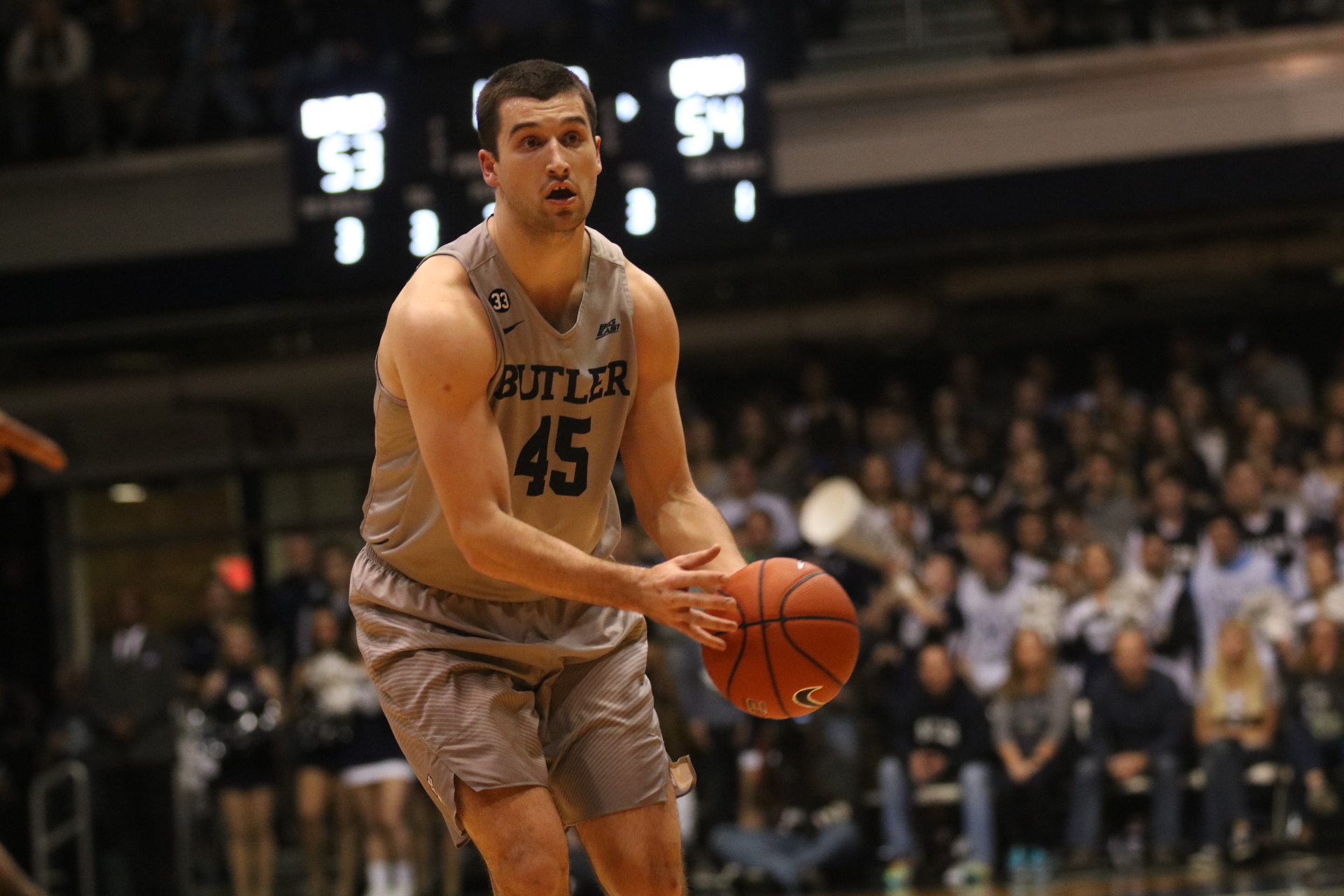 Andrew Chrabascz, who scored 21 points against Marquette, looks to pass to a teammate earlier this year. Collegian file photo.

The No. 22 Butler University men’s basketball team picked up a 68-65 conference road win against the Marquette Golden Eagles on Feb. 7 at the BMO Harris Bradley Center in Milwaukee, Wis.

When it mattered most, Andrew Chrabascz took over the game. With just under five minutes to play, Chrabascz scored eight straight points for Butler (19-5, 8-4 Big East) to propel them to a lead they managed to hold on to.

Chrabascz led all scorers with 21 points. He also filled up the stat sheet with five rebounds, five steals and four assists.

Avery Woodson, who did the majority of his damage in the first half, finished with 17 points and six rebounds. Kamar Baldwin, Tyler Lewis and Tyler Wideman all ended up with eight points. Wideman grabbed a team high seven rebounds while Lewis paced the team with five assists.

The duo of Luke Fischer and Markus Howard provided the offensive spark for the Golden Eagles (15-9, 6-6 Big East). Fischer recorded a double double with 19 points and 13 rebounds while Howard scored 19 points and was 5-of-8 from deep.

In the first half, star forward Kelan Martin did not play due to a coaches’ decision. Despite his absence, Butler held a 40-33 lead heading into the locker room after a hot three point shooting performance. The Bulldogs combined to go 7-of-13 from behind the arc and Woodson registered 15 points in the half.

Martin clocked a total of ten minutes and scored one point.

With the win, Butler continues their mark of never having a three-game losing streak under head coach Chris Holtmann. Also, the Bulldogs swept the regular season series after beating Marquette 88-80 on Jan. 16.

Butler continues their road stretch with a trip to Providence, R.I. to face the Providence Friars on Feb. 11 at 4 p.m. on CBSSN. In their previous meeting this year, the Bulldogs had a hot shooting performance to win 78-61 on Jan. 1 in Hinkle Fieldhouse.