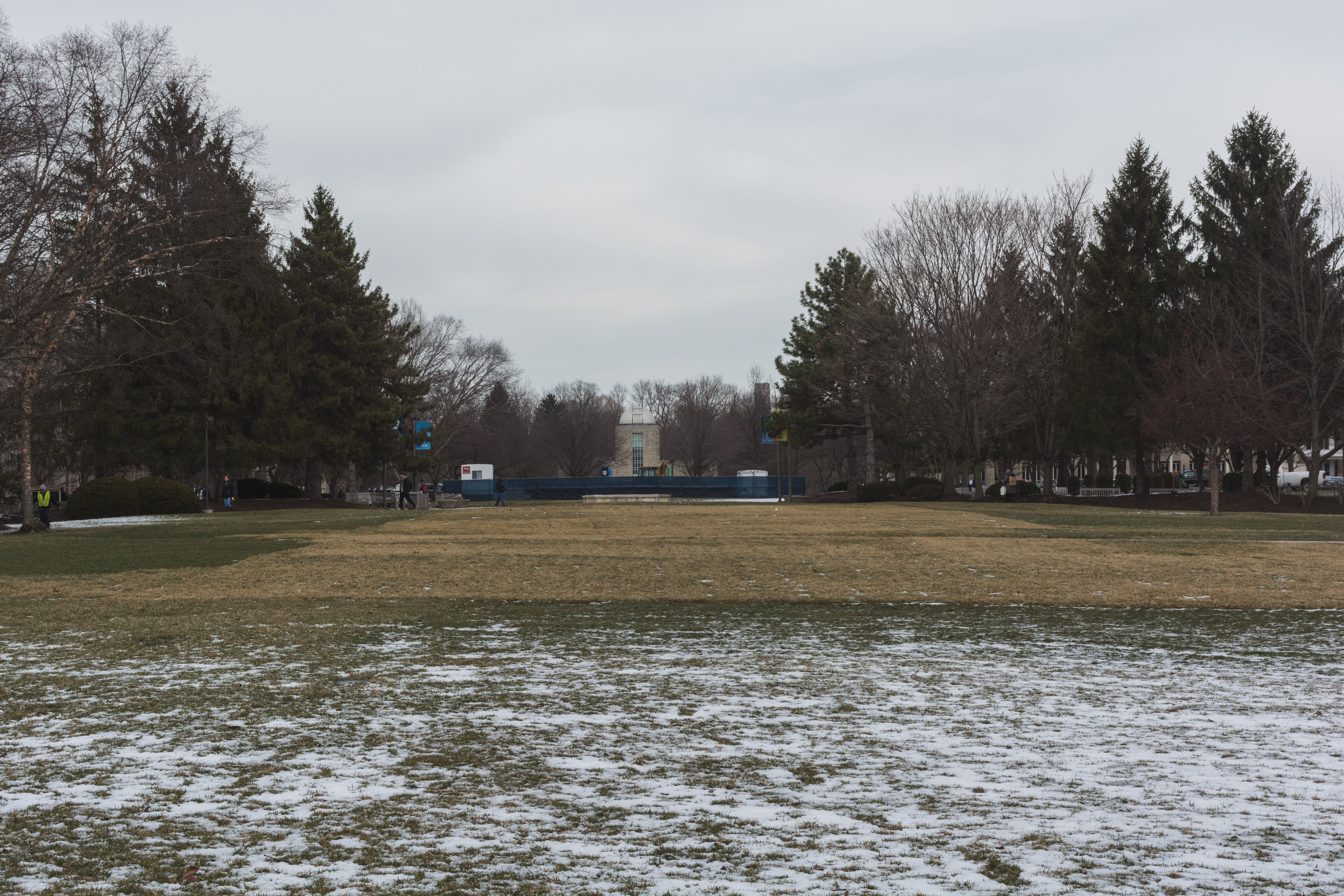 Those are words students use to describe the Butler Mall at night.

“When you’re walking back late at night, there are no lights,” McConnaghy said. “It gets really dark, you don’t know who’s walking near you and it’s creepy. You can tell where you’re going, but you feel unsafe.”

“When I’m walking through the Mall, I’m basically covered in darkness and I don’t feel safe,” Haley said. “I always have to Snapchat my friends or call someone or even share my location with someone on my iPhone, just to make sure I don’t get mugged. Yes, Butler’s a safe campus, but you never know what’s going to happen. Especially in the dark, you’re paranoid, and it’s scary.”

Rich Michal, executive director of facilities, agreed the lack of light around the Mall is a problem. Currently, the lights on both sides of the Mall’s sidewalks are dim or do not work. Only five of them are operational.

Many of the lights on the Mall were installed over 30 years ago, when the trees were also planted. They have now grown and covered those light posts. Other posts are shorter but do not provide much light.

Michal said there is a balancing act with the trees involved.

“We need them to be high enough so they throw more light and cover more area, but low enough so they’re not up in the trees again,” Michal said.

Logan Schwering, junior vice president of the Student Initiatives Board, has had many conversations, some of them with Michal and his team, regarding the lights around campus.

Schwering said the university does have a grant for the west side of the Mall, which is along Jordan Hall and Atherton.

The funding provided only allows for the new lights to be in the same location as the old ones, so they cannot be moved to a new area without trees.

The new lights will be similar to the blue ones along Fairview’s walkway. Like all new lights on campus, these will be LED, which is more environmentally friendly.

A common belief among students is that more lights would obstruct the observatory’s view of the night sky. McConnaghy also thought this was why the university has not yet installed the lights.

Michal said that is not the case because lights only interfere with the telescope if they shine into the sky.

“These are designed to fully shield and minimize the amount of the light that’s just flying up into the atmosphere,” Michal said.

More lights will be put in with these construction projects: the green flagpole area in front of Clowes Hall, which will be more pedestrian friendly, and the new Lacy School of Business, which will be rebuilt in the current parking lot next to Irwin Library.

With the completion of the new academic building, lights will be installed along Irwin, Michal said, and hopefully, down where ResCo is too. This will be completed by the fall semester of 2018.

McConnaghy said 2018 is not soon enough.

“[The lack of lights] is the number one complaint that I’ve heard around campus,” McConnaghy said. “Usually Butler’s pretty good about addressing students’ concerns, but this is a major one that they haven’t done anything about it yet.”

Schwering said Student Government Association does recognize the lighting as a high priority. Many students — either during Outreach Week when student can bring issues to SGA, through surveys or the Senators — have made their voices heard about the lack of lighting.

The Student Initiative Board goes on night-walks through the campus with Butler University Police Department. They identify areas that need more light, one of them being the Mall. However not all the lights on campus are controlled by the university. Some of them — mostly on the exterior of campus and along the streets — are regulated by Indianapolis Power and Light.

“We’re trying to work with both Butler and an outside force too with IPL,” Schwering said. “They’re backlogged greatly, so it sometimes can take a couple of months for them to get here to fix a light.”

Every year, SGA submits 10 capital budget requests to the university, who has money allotted to the side for campus improvements.

“The number one capital request we put in was for lighting on the East side of the mall, along ResCo up to the library,” Schwering said. “So hopefully the university, after we put that in as our number one request, will note that and recognize that as a high priority because it certainly is for us and we made that known.”

Michal said from now until summer, they are doing the best they can to keep the current lights working, including the five lights that are not functioning now.

“Obviously we recognize this as a need, something we want to improve as SGA…in the meantime, while we’re working on getting grant money in and putting in requests, just remember that those services are offered too,” Schwering said. “We don’t want people to feel uncomfortable walking late at night or early in the morning when we got those services that BUPD provides 24/7 to students.”

But from now until summer, the Mall will remain dark. It will be fully lit by fall 2018.

“I think it’s important students feel safe,” Haley said. “Especially if they’re walking back late at night, they’re probably stressed about homework and all those other stuff they have to get done. They want the security that they’re on a safe campus, that they can see where they’re going, and they feel okay walking around at night by themselves instead of needing to Snapchat or call someone just to get from Starbucks to ResCo.”