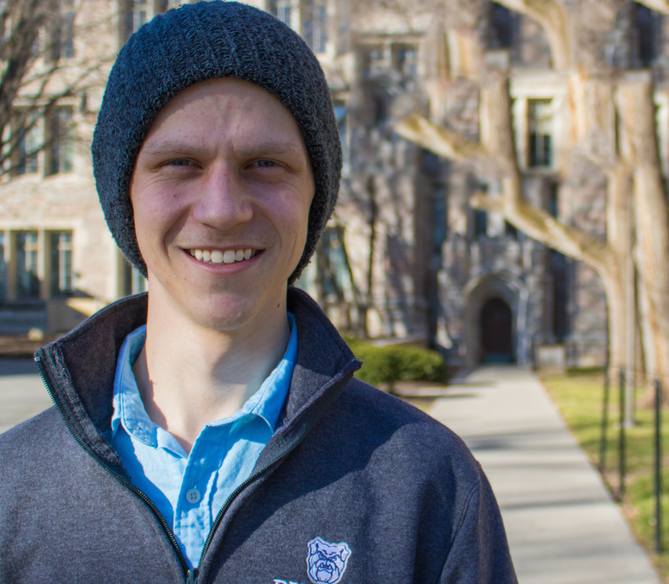 Fall of 2014, first-year Jimmy Lardin approached the Programs for Leadership and Service Education table during Week of Involvement.

He asked, “Hey, how old do you have to be to run for student government president?” This had always been his goal.

After the first year compulsion to join every organization, Lardin said his philosophy was to not pursue a position unless he was sure of his passion and that he was the best candidate.

“There was a period of time when I thought, ‘OK, Jimmy, you need to sit back,’” Lardin said. “This is junior Jimmy versus first-year Jimmy. First-year Jimmy just wanted to be involved in everything. But myself now, I’ve realized I thought I would be the best for the position.”

Lardin was elected the new Student Government Association president for the 2017-18 school year on Feb. 23. The election was called three days after voting ended, the longest delay in the past four years of SGA presidential elections.

Lardin saw student government as an opportunity to make impactful changes on the campus he loves. It soon became his passion.

Lardin promised during his campaign to make SGA work for everyone. Every student, no matter their year, major, background and any other identifier. He will do this by making SGA more accessible, whether it be through the Senators or the seven boards working more closely together.

In the SGA presidential debate, Lardin said he plans to make Senators more accountable and representative of their constituents by having a bigger presence, such as sending weekly emails. He added that currently, the seven boards of SGA do not work cohesively, such as planning a diversity event the same day as a student initiative program, and he will increase communication between the boards.

Natalie Jacobs, a sophomore and campaign member — dubbed the “campaign mom” as somebody who always makes sure everybody is on time, fed and taking care of themselves — has known Lardin since her first year.

“This wasn’t a ‘How can we sell this to the university, how can we make people think Jimmy should be SGA president?’” Jacobs said. “It was always, ‘This is why I want to run: there is change that needs to be made, there are people on this campus who do not feel represented and are not represented, there are students on this campus who feel ostracized from the campus as a whole, and that’s not okay. We need to be a governing body that encompasses that and takes that head on.’”

Lardin is a political science major, which he calls a “problem-solving major” because from the classes he has taken, such as international conflict and environmental justice, there has to be an understanding from all perspectives to address any issue. In the SGA presidential debate Feb. 16, he identified the ability to understand and commit to students as a strength. By understanding students and their multiple perspectives, he said he can better address issues.

“Because of course, if you see through one scope, one lens, the world is a very narrow view,” Lardin said. “If you can’t see past that, I don’t think there’s any chance to solve problems.”

Lardin said he is passionate about social justice issues.

“I know I’m a straight, white cisgender male, and that in a lot of ways, the world has been set up for me,” Lardin said. “I don’t like that; I don’t think that’s fair. I don’t think it’s OK for things that happen by accident at birth, something out of your control, [that] can directly affect the way the rest of your life goes.”

This past summer, Lardin was diagnosed with testicular cancer, which spread to other organs during fall semester — something out of his control. But he did not let it control him.

“I have cancer,” Lardin said. “That’s totally fine. Something I did to keep myself grounded the entire time to make myself realize, you know, ‘Jimmy you’re not in the worst position in the world.’ Having parents that can afford Western medicine in Indiana, where my hospital is 15 minutes away from where I go to college — not that big of a deal. I have testicular cancer that spread to various places of my body, but still have fantastic cure rates.”

Lardin knew he could be in a much worse place, such as the Syrian refugees’ situation, and having been born in an amiable environment is not something he takes for granted, he said.

In November, he continued to follow his passions by attending the Women’s March in Washington D.C. with Jacobs.

“I had to give him his blood thinner shot at a gas station in the middle of Pennsylvania,” Jacobs said. “He’s not going to let that stop him from anything.”

Then when it came time to decide whether to run for SGA president, his first goal as a Butler student, he had to ask himself if he was still passionate about representing the student body.

“My biggest fear is that I would fail Butler if I wasn’t passionate about it,” Lardin said. “I think a lot of it had to deal with spending a lot of energy on other things this last semester, like with medical issues, so I had to really sit on it and talk to myself and say, ‘OK, is this passion that you’ve had your entire college career, that might’ve disappeared for a little bit, is it still within you?’ Ultimately, I concluded yes.”

And he ran for the presidency and won.

Nick Huang, the SGA president runner-up, works closely with Lardin not only in student government, but on the Fall Alternative Break committee.

“I have the utmost respect for Jimmy; he’s somebody I very much look up to,” Huang said. “I think his commitment to people is unwavering and anyone that you ask on this campus will reinforce that he is truly here to benefit every single person around him.”

Lardin’s passion for every student to be represented and heard, to be accepted and embraced, to be part of Butler’s Community of C.A.R.E., showed before his campaign for presidency.

In the SGA Presidential Debate, Lardin said he experienced Butler’s Community of C.A.R.E. in all of its good intentions. But he has heard stories of and has friends who have had complete opposite experiences, where their needs have not been heard and have not been met.

Lardin said he can care for many students individually,  but it is not possible to reach the whole student body. As the SGA president, though, he has the ability to extend the Community of C.A.R.E. to every student.

“Some of these goals might be students on campus who feel like they don’t belong — how do we go about addressing this, how do we give them a form to express those concerns,” Lardin said. “Because the worst thing you can feel is unwanted and no way to let that out, or share that with someone. That’s the best way you can make someone feel unheard.”

He has identified a few problems within student government, one of them being the separation of the seven SGA boards, which often do not work together. This can cause separate goals and disunity. The seven SGA boards are appointed positions whereas the Senate is popularly elected.

“I found there’s a lot of pushback where there’s some of these other appointed positions and boards who have a lot of access to the student budget, had all the decision-making ability on projects and programs, which is problematic because how come 30 selected students get to make the decision on behalf of 4,000 students?” Lardin asked.

Jacobs said she likes that Lardin is trying to get rid of some of SGA’s stigmas, such as six elite students who make all the decisions.

Lardin said he will change that stigma by going from students to SGA, or “bottom-up.” Decisions will be made by first collecting information from surveys or other forms from the student body about their needs, then gearing the rest of student government toward those needs.

“I intend to improve government in such a way that people find it accessible, that it’s not an elite organization that you have to know someone, but it’s an association that works for every student regardless of who you are, regardless of your identifiers, but also regardless of your involvement,” Lardin said. “I don’t feel like you need to have a position in student government for your voice to matter, to be important or to make an impact on this campus.”