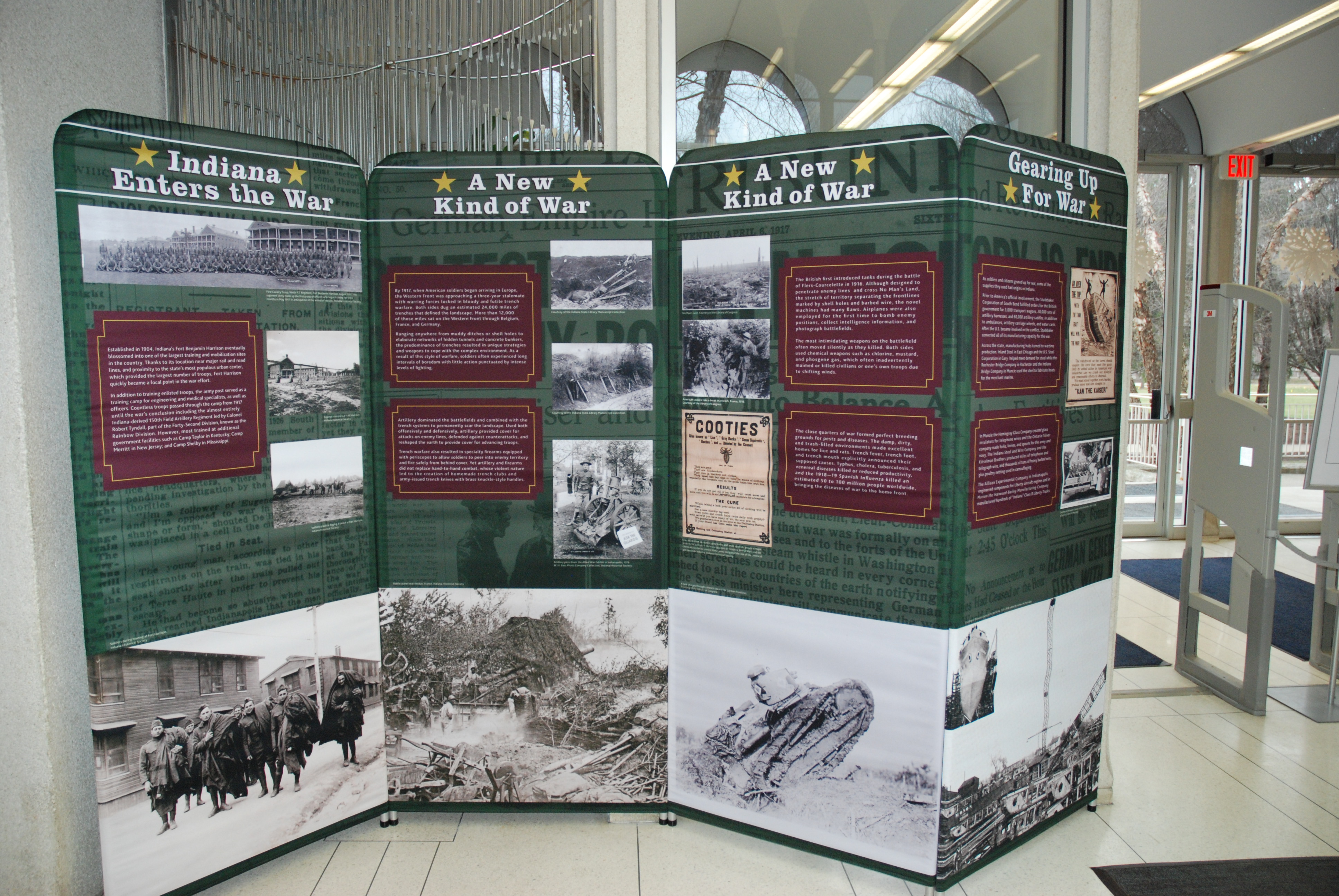 Photo of WWI photo board in Irwin Library by Samantha Lilly.

Butler University is commemorating the hundredth anniversary of the United States’ entrance into World War I with a variety of exhibits and events around campus.

There are two exhibits on display in the lobby of Irwin Library through March 6. A reception was held Feb. 21 to showcase the exhibits.

One of the exhibits, “The Great War: From Ration Lines to the Front Lines,” is on loan from the Indiana Historical Society. The 16-panel exhibit examines Indiana’s contributions to the war and the effect it had on Indiana. The other, “Exploring the Great War Through the Arts,” was curated by Irwin Library’s Special Collections staff, and features the stories of various sheet music, political cartoons and poetry from the war.

Included in the collection are cartoons by prominent Indiana cartoonist Gaar Williams, who worked for the Indianapolis News during World War I and became well-known as the “Hoosier Cartoonist.”

Some of the sheet music from the exhibit will be featured during “Britain, the USA — and Indiana: The Great War in Song,” a concert-lecture to be held Feb. 22 at 7 p.m. at the Eidson-Duckwall Recital Hall. The event is free and open to the public and satisfies a Butler Cultural Requirement for students.

Lecturer and vocalist Andrea Axelrod will perform popular and art songs from and about World War I, accompanied by pianist John Cook. Also performing on the piccolo will be junior music performance major Jenny Snedeker, who appreciates the history of the music.

“I enjoy this type of music because fifes and flutes were often used in the military, and to emulate this sound requires a different style of playing than the traditional classical repertoire that I’m used to,” Snedeker said in an email to the Collegian. “Playing in this march style requires me to put myself in a different mindset and makes me really consider the origins of the music, which is why I enjoy playing in this style of music.”

John Ramsbottom, visiting professor professor of global and historical studies, said centennials are a time to look back.

“There’s nothing magical about a hundredth anniversary,” Ramsbottom said, “But as it approached I realized that there were a lot of things that are connected with the first World War that are important to us now: immigration, freedom of speech, the military and the possibility of conscription, but certainly the issue of who should be allowed to serve, encouraged to serve.”

The exhibits and events are an outgrowth of Ramsbottom’s history class called The Great War.

“I think the goal is to give history students, and also the Butler community … a very rich and integrated idea of the war experience from a number of different viewpoints,” Sally Childs-Helton, associate professor and librarian, said.

Many Butler students’ lives were disrupted during World War I, Childs-Helton said. Many of the males on campus went off to war, and the campus became predominantly female. Many of those who had to leave were never able to return to their studies.

“One of the things I really want students to carry away from this is that if they had been at Butler University one hundred years ago this could have been their life,” she said.

In fact, Childs-Helton said there were close to 800 Butler students and alumni who served in the war.

The exhibits and events are made possible by support from the National Endowment for the Humanities Frederic M. Ayres Fund, the Butler University Global and Historical Studies Program, Butler University Libraries and a gift from the Estate of Butler Alumna Marjorie Rork.

Just like Childs-Helton, Ramsbottom said he that the exhibits and events encourage reflection about a momentous event.

“This is an opportunity to think about what might have been a turning point event for modern American history,” Ramsbottom said.