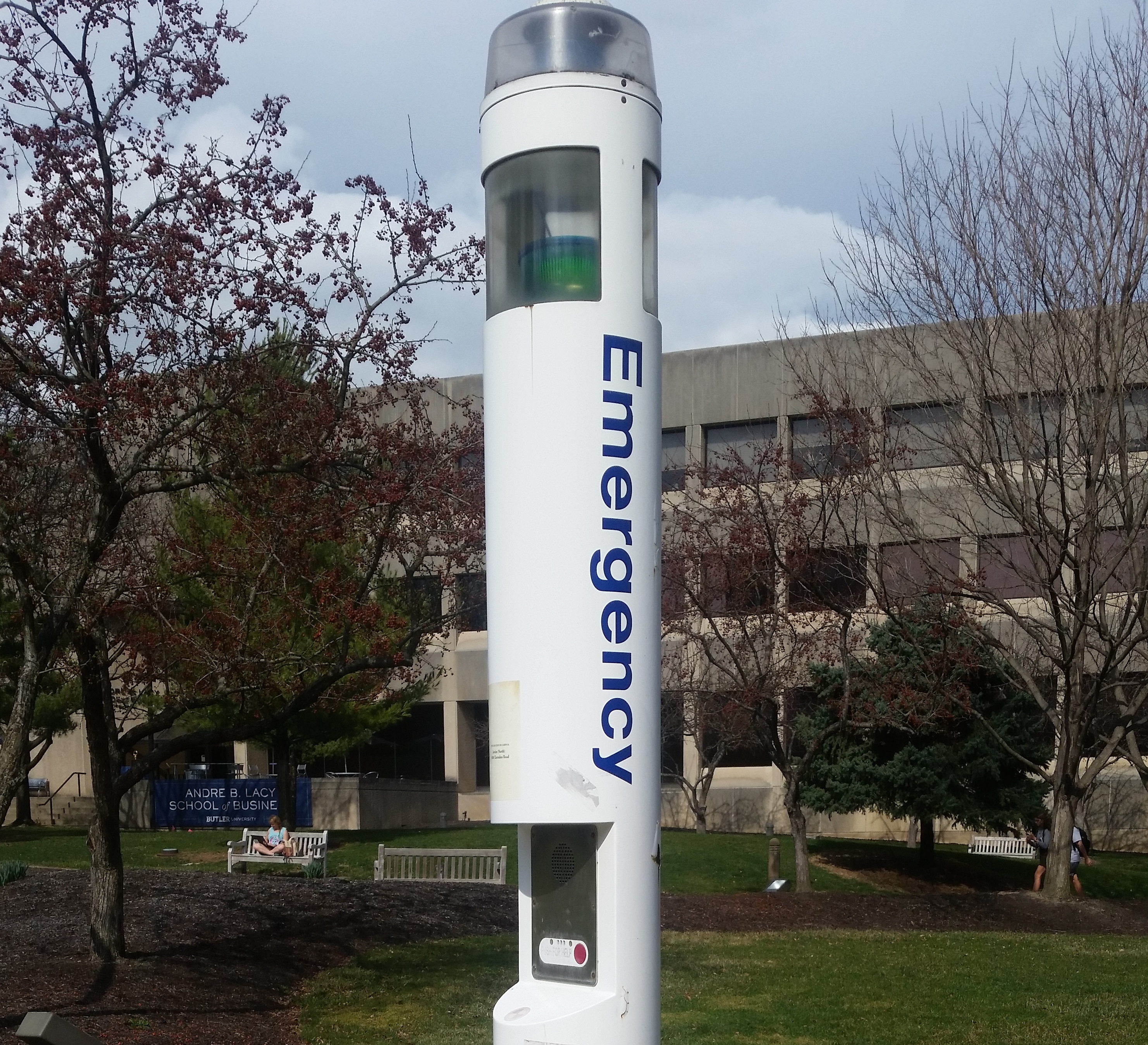 All over campus, 23 blue emergency poles stand tall, lit up to serve as a way for students to contact the campus police if they are in trouble.

Ninety-two percent of students are familiar with the blue emergency poles on campus, while six percent do not know what they are, according to a Twitter poll of 51 Butler students.

The blue emergency light poles stationed around campus are safety mechanisms for Butler students if an emergency situation were to occur.

Placed by large foot-traffic paths, in Holcomb Gardens and around buildings, the blue beams can be seen during the day and night. The poles include red buttons that directly connect with Butler University Police Department’s dispatch station. It makes a call to the university’s police station, who will then dispatch a police officer to the area immediately. BUPD detective Courtney White  experienced some of the blue-pole calls.

“It’s a great emergency response way,” White said. “It’s a huge safety precaution and safety measure that is used a lot, whether it be accidental, third party or a medical emergency. They are definitely utilized.”

White said the poles are rarely used for emergency situations. Usually the button hits are accidental, caused by maintenance workers. There are also emergency buttons inside elevators that students sometimes accidentally hit. The hit alerts the police no matter the circumstance. The call starts an open line, and the person can communicate with the officer directly. BUPD is sent the location and time when the pole was hit.

The recent university construction projects caused some poles to be taken off-line, due to cut cords and faulty wiring. The construction affected some of the cameras on the poles, but the system still works in an emergency. If the pole’s camera is off-line, the surrounding cameras on campus are moved to see the area.

“That’s one great thing about it, is that we not only know which pole it is ringing in, but we have camera views as well,” White said. “People don’t realize how many cameras there are around campus. There are a lot of them.”

Sometimes people will hit the button while walking when there is no real emergency, White said. Police officers are dispatched anyway, as with any call. It is considered “false reporting,” similar to calling 9-1-1.  BUPD goes to the area whenever a button is hit, even if it was accidental.

“Officers are sent to the area regardless of whatever the call is, if someone is on the other line or it’s dead air,” White said.

“I normally feel really safe because I don’t run at night,” Vitelli said. “I think maybe when I go back into Holcomb, a little farther away from campus, I feel a little unsafe just because it’s a little more secluded. Other than that, I feel totally secure.”

Vitelli said she sees only a few light poles during her run: One by the Holcomb steps to the I Lot and one by Hinkle.

“I know they’re there, but I don’t know if I’d be able to use one if it were an emergency,” she said. “It would be nice if there were more. Especially back in Holcomb where it is not as populated.”

First-year secondary English education major Haley Huelsman parks her car in the I Lot, the parking lot across the canal and by the sports fields. Huelsman said she sometimes will walk late at night from I-Lot. She sees three to four blue emergency lights on the path.

“The walk from I Lot to campus is very well lit,” Huelsman said. “I don’t have an issue with the lighting at all. But when you do come back on campus, there are some darker areas.”

Huelsman said more lights could be placed by the canal and areas surrounding Fairview House.

“I think it is fine for now, but there is always room for improvement,” she said.

BUPD checks the emergency light poles to ensure they are working properly, as officers go to the poles and press the buttons for test runs at least once a month.

“It’s a great safety precaution for everybody on campus,” Officer White said. “We take good pride in it.”

With the construction of a new residence hall and the Lacy School of Business, more emergency light pole stations will be moved or added in the future.

“It’s a phenomenal system put in place for whether you’re in an emergency, you view something, or you want to help somebody,” White said. “That’s what it’s there for.”