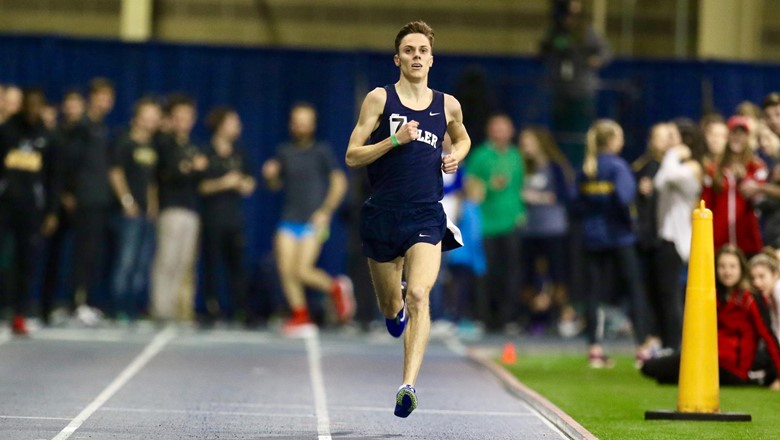 Erik Peterson running down the straightaway of a track during a meet. Photo from butlersports.com.

Peterson, a senior, is a three-time All-American distance runner for Butler University’s track and field team. His name pops up often in event recaps and towards the top of results pages.

Over the past three years as a Butler runner, Peterson has shattered both personal and school records in the 3000-meter and 5000-meter run. Now, during his senior season, Peterson has not let up yet.

In regards to his goals for his final season, Peterson had a clear vision of what he wanted for the first half of the season.

“I just wanted to make the indoor national meet,” Peterson said. “I’ve never made it before, so that was the A-1 priority. Beyond that, just to run fast.”

“It feels pretty cool [to be nationally ranked.]” Peterson said. “I’ve had it in outdoors and cross country, but it is cool to have it indoors because it is more of a select group of people because only 16 [indoor runners] get to go. It’s different.”

Also, during his senior season, Peterson broke a Butler record in the 3,000-meter run at the Meyo Invitational on Feb. 4 with a time of 7:51.21.

Being this successful of a senior, Peterson has become a leader for this Bulldog team according to his teammate.

“I would describe him as a leader by example,” Johnson said. “He is not super outspoken, but he will do what he needs to do, speak up when he needs to, ask him anything he will be willing to give you an answer. He’s someone who you want to follow and follow his example by the way he both works and the results he gets from it. He doesn’t need to say much to be a leader.”

Matt Roe, head coach of the Butler track and field team, believes Peterson not only sends a message to his team but also to future recruiting classes.

As for other accomplishments throughout his college career, Peterson was named both the Most Outstanding Rookie and First Team All-Conference in 2012 while Butler was still in the Atlantic 10 Conference. In 2014, he was an NCAA Cross Country All-American and All-Big East outdoor track runner.

Roe said Peterson is the kind of athlete coaches dream of having on their team.

“He’s just a great guy, a wonderful person,” he said. “And he’s really, really easy to coach. He’ll do exactly what you need to him to do and that as a coach you couldn’t hope for anything more than that.”

Outside of Butler, Peterson had the opportunity to compete in the Olympic Trials in 2016. He was the youngest runner in the 10,000-meter run and the only one with remaining collegiate eligibility. Although Peterson ended in the final spot in the race, he said he felt it was a great experience.

As the future quickly approaches, Peterson will race in the Big East Indoor Championship this Friday and Saturday in Staten Island, New York. If he advances, he will compete in his last indoor meet for the NCAA Championships at Texas A&M University on March 10 and 11.

Peterson will have one final outdoor season before retiring his Butler uniform for good.

Peterson will receive a degree in accounting and plans to move out west to Denver, Colorado. But he wants to keep running whether it be in a group or a club, and  train while working a full-time job.