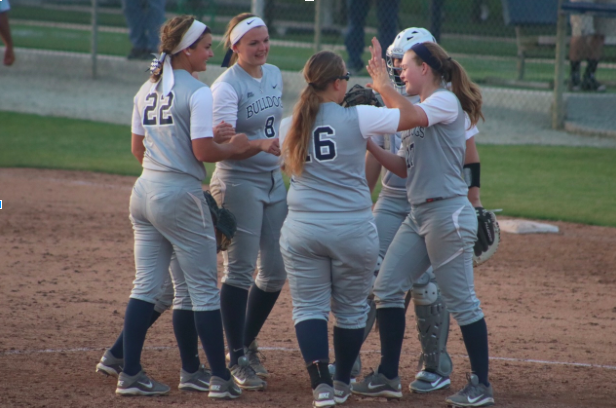 Butler softball players circle up around the mound during a game last year. Collegian file photo.

The Butler softball team started their season off on a positive note at the Total Control Sports Invitational in Rosemont, Ill. The Bulldogs went 3-2 on the long weekend.

The Bulldogs won the first game in thrilling fashion, as junior outfielder Sarah Dixon launched a ground-rule walk-off double to beat Miami (Ohio) University 13-12 on Friday. The Bulldogs then came from behind to beat University of Detroit Mercy 9-8 later in the day.

Dixon went 3-of-5 at the plate and brought in five runs against Miami. The Bulldogs overcame seven errors to earn the victory.

“It felt amazing to get back out there,” sophomore outfielder Jenna Foreman said. “We have great team camaraderie. We have a promising future.”

Butler split Saturday’s games. The Bulldogs lost to Western Illinois University 7-6 but bounced back to defeat University of Wisconsin-Green Bay 8-0 in five innings. Freshman pitcher Gabbi Schnaiter hurled her first shutout in her Butler career against the Phoenix.

Learn from it, regroup and get back after it. Start of a fun year!

Foreman had three hits for the Bulldogs against the Phoenix, and sophomore infielder/pitcher Kaitlin Doud added a double and a triple. Doud knocked in two runs and went 2-for-2 on the day.

“We are still working out some kinks,” Doud said. “The most important thing is that we play our best ball when Big East play comes.”

The Bulldogs lost to University of Illinois-Chicago 10-0 on Sunday. Sophomore catcher Sammy Andersen said Butler will continue to work to improve.

“We put in a lot of work in the month before this and we were ready to be out there this weekend,” Andersen said. “There were a lot of positives from the weekend, but we learned we still have a lot of things to work on before conference play starts up in order to be a strong competitor.”