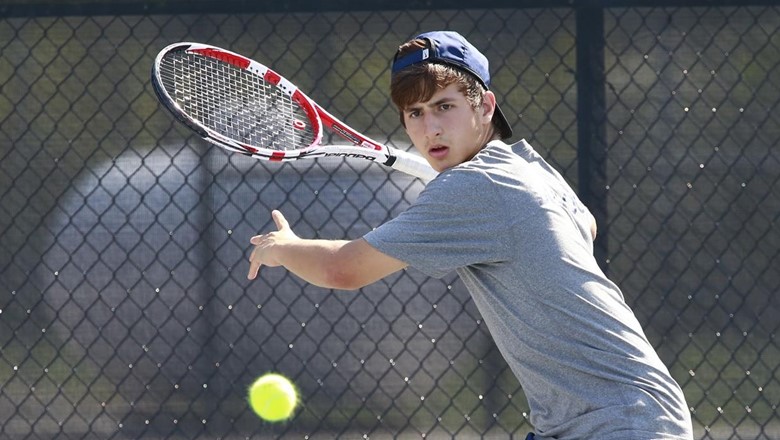 Sophomore Adrian Mag sets up for a swing. Photo provided by butlersports.com.

The victory over the Tigers extends the Bulldogs’ winning streak to five games.

The team dropped two matches in doubles play, but they picked up a victory in the No. 3 doubles spot from sophomore Mason Dragos and freshman Samuel Sullivan.

The Bulldogs swept singles play from the Tigers. Sophomore Aviv Ben Shabat consistently holds down the No. 1 slot and proved that again last night in a three set victory.

Strong performances from the rest of the sophomore class closed out the victory for the team. Mason Dragos, Spencer Lang, Ari Gerstein, Adrian Mag and Temilope Adelakun rounded out the singles line-up. All five clinched two set victories in their spots, No. 2 through No. 6, respectively.

Mag jumped up to the No. 5 spot as senior Mikheil Khmiadashvili did not play.

After matches in back-to-back days, the Bulldogs will have a week off to prepare for Eastern Kentucky on Feb. 25. Butler will travel to Richmond, Kentucky for a 2 p.m. match.