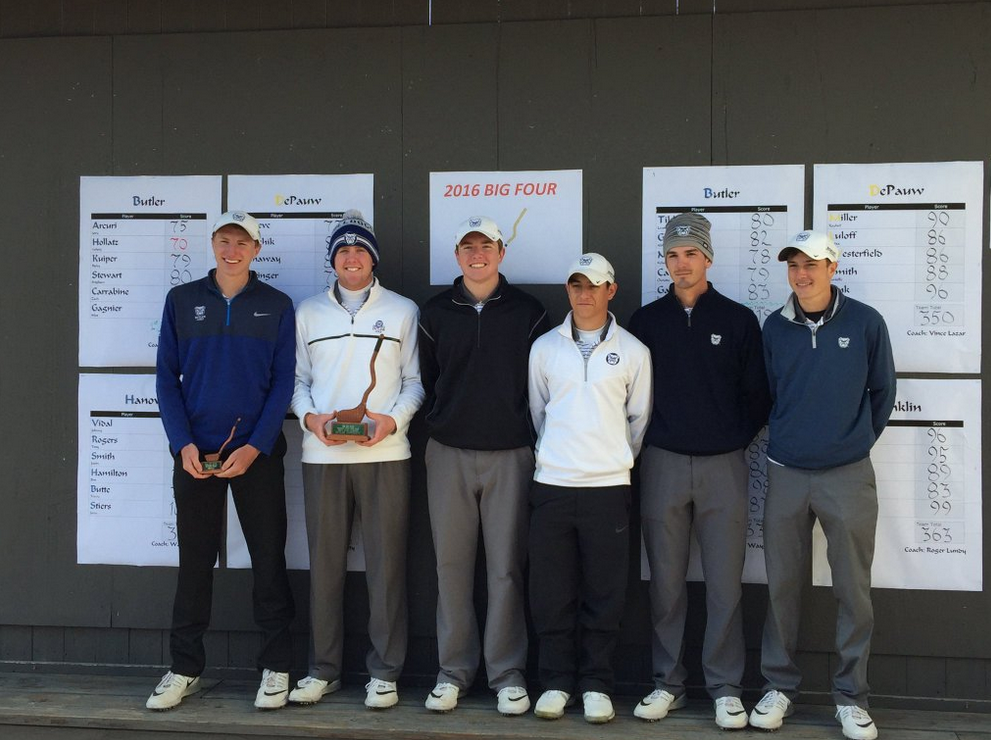 The Butler men’s golf team poses after receiving an award. Photo from @ButlerUGolf.

The Butler University men’s and women’s golf teams are focused on the Big East Tournament as they begin the spring portion of their schedule.

Both teams have seen improvement in Big East placings over the past several years, jumping one spot every season. The men have placed eighth, seventh and sixth over the past three years, and the women have finished sixth, fifth and fourth.

The women’s team hopes to continue their strong play from the fall season. Their worst finish in the fall was fourth place in the Illinois State Redbird Invitational. However, the women had three top-three finishes as well as a win at the Loyola Invitational in Chicago and were in position to win all four of their fall tournaments.

The men’s team saw early season struggles turn into positive progress late in the fall schedule when they finished fourth at the Dayton Invitational and had the lowest team score in the final round.

“We had a meeting and focused on making a lot of pars,” head coach Bill Mattingly said, “Not trying to overtake the golf course and just let it come to us.”

Making pars is a point of emphasis heading into the spring schedule.

“Sometimes we get out of sorts when we have a bad hole and try to make it all up on the next one,” Mattingly said. “We have to realize the conference tournament and these other multi-round tournaments are long so we just have to take it one hole at a time.”

Mattingly said he hopes this approach will eliminate big numbers.

“We need to sharpen our short games around the green,” Mattingly said. “Overall we have good ball striking on both teams, but we need to focus on course management.”

Mattingly said taking the golf course on hole at a time and not taking risks that they don’t need to take will improve their course management and their scores.

Freshman golfer Pat Allgeier has spent the majority of his winter working on his putting and course management.

“Putting was my downfall in the fall season,” Allgeier said. “I’ve been working a lot on that and I hope that will cut down on the big numbers. I’ve also been working on not losing shots where I don’t need to by making better decisions and becoming more consistent.”

Allgeier said he thought having a semester of collegiate golf under his belt would improve his play.

“I learned that par is a good score,” Allgeier said. “You don’t have to go out and birdie every hole, but not making a lot of bogeys is a big deal.”

Freshman golfer Betsy Werner is using her first semester of golf to increase her confidence.

“It’s just golf at the end of the day, it’s still the same game.” Werner said. “I’m going to keep that in mind and come into the spring with more confidence.

Allgeier and Werner said they are excited to get back on the golf course after the winter and be around the team once again.

Mattingly said he was encouraged by the progress he saw throughout the fall as they moved closer to winter. In previous years, the teams had started off well but struggled late in the fall and into the spring season.

“It’s a good sign,” Mattingly said. “Last season we had a great finish in Wisconsin and then struggled in Dayton. Having it the other way around helps their confidence and they are excited to begin the season in Savannah this weekend.”

Mattingly said he looks forward to seeing what the teams can do this spring.

“I’m excited,” Mattingly said. “I think both teams have a really good chance to win the Big East, and I’ve got a really great group on both sides. It’s all been positive and we are moving in the right direction.”

The men’s team begins their season next Monday in Savannah, Ga., when they compete in the William & Mary Invitational. The women will begin their season March 6 at the Benbow Invitational in Jacksonville, Fla.