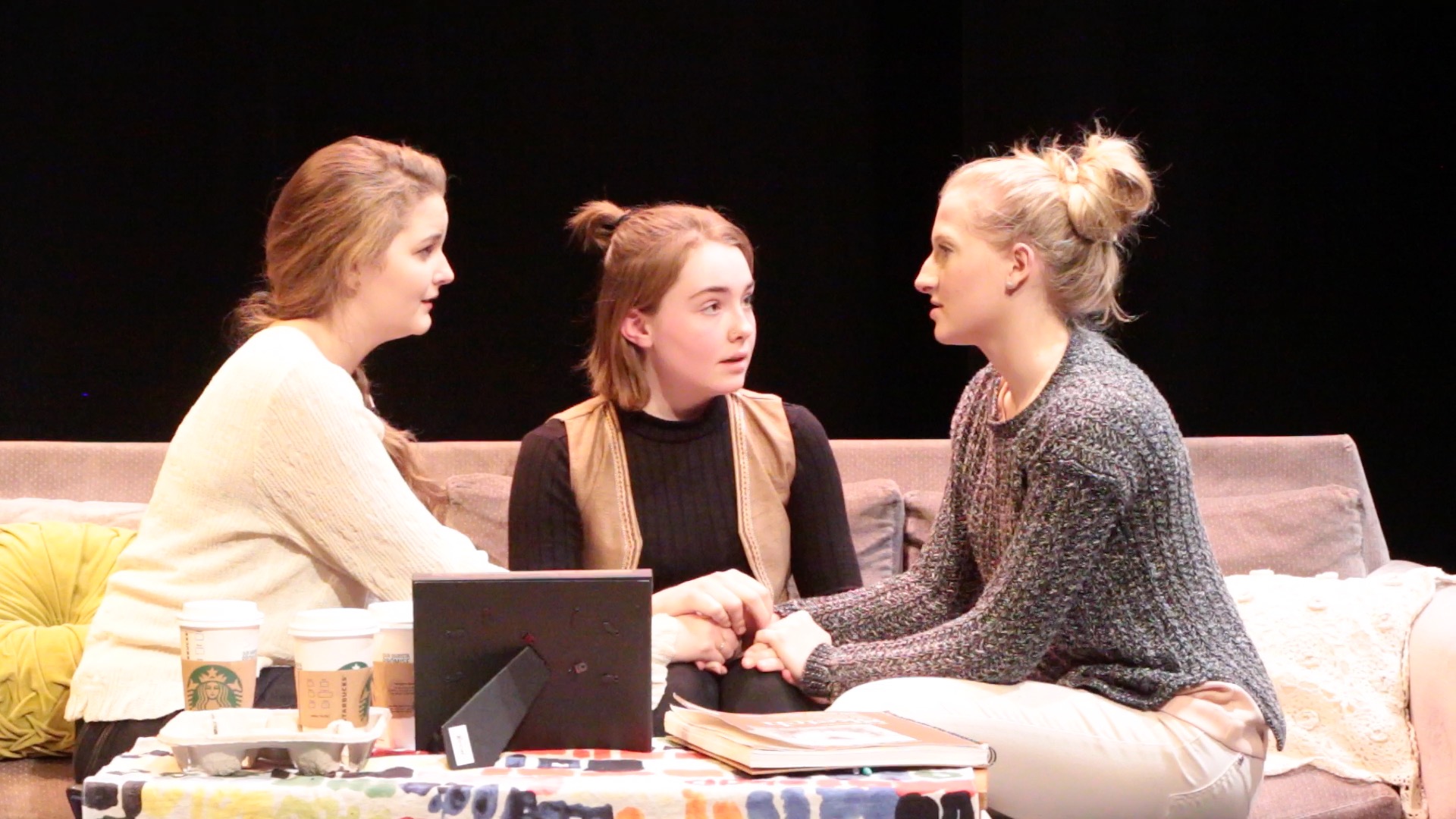 Senior theatre major Sonia Goldberg debuted her work “The Back Pocket Play” last Thursday through Saturday in Lilly Hall. Goldberg wrote and directed the play for her senior honors thesis.

Goldberg said she drew her inspiration for the play from her transition from moving from a diverse neighborhood in Chicago to Butler University.

“Because I grew up in Chicago, went to a diverse high school, and lived in a very diverse neighborhood, Butler University itself was a huge culture shock,” Goldberg said. “This show is for everyone, but is heavily influenced by the Butler Community.”

“The Back Pocket Play” is set in an apartment in the northside of Chicago and tells the story of a reunion of three friends, Sam, Daina and Crystal as the release of their mutual friend Jaime from prison draws near. Sam and Daina have not talked to Crystal in two years; all communication ended when Crystal left immediately following Jaime’s arrest to start a new life. Sam and Daina acknowledge that race played a role in her arrest. All three friends dealt with Jaime’s arrest differently, and they discuss and navigate through each of their differing viewpoints and experiences.

Goldberg’s play addresses issues of class, privilege and race she said she has observed both in and outside of the Butler community.

“At the beginning of my sophomore year, Black Lives Matter protests were happening,” she said. “We had a very tiny protest [at Butler], but still impactful, where we walked around, said chants and had an open forum at Star Fountain talking about frustrations and hopes. It was very uplifting.”

The Black Lives Matter movement was created initially as a call-to-action in response to the murder of 17-year-old Trayvon Martin by neighborhood watchman George Zimmerman. Zimmerman was acquitted of charges of second-degree murder and manslaughter.

Goldberg discussed how negative conversation around the movement, specifically on Yik Yak, sparked her idea for the play.

“Cowards come out on Yik Yak because it’s anonymous,” she said. “They were saying things like ‘I don’t see why black people think they’re better than us, I don’t see why we have to talk about this, why are they forcing our opinion?’ That was the first time I felt uncomfortable about that culture shock. I was quite upset. This was a human issue, not just about black and white.”

Goldberg offers a fresh take on an issue that has been prevalent for a long time. She said she did a lot of research on institutionalized racism over the summer to bring the show to life. The most influential book she read was “The New Jim Crow” by Michelle Alexander. Goldberg noted that while she realized racism was still present, she did not realize the connection between slavery and mass incarceration, something the book made clear to her.

“There’s the concept of color blindness that white people and everybody are adapting, saying they don’t see color; therefore, they don’t see the consistent disenfranchisement of people who are literally living as second class citizens,” Goldberg said. “The notion of pseudo-benevolent colorblindness is how racism is working in society today.”

Each of the characters in Goldberg’s play represent and are based on the many different types of people she has encountered through her research and through life experience.

“Daina’s character represents ‘social justice warriors’ getting too confrontational and having no idea of how to change people’s minds and kind of losing their argument,” she said. “Sam represents how to do it by treating the people you disagree with as actual humans. That was a huge part of writing individual characters. Even the antagonist, Crystal, is actually a protagonist. They have to be human, they have to be likeable. There are no bad guys in this show.”

“I wanted it specifically to be an inviting space for people who grew up in predominantly white neighborhoods to realize that even they have a greater stake in the conversation of racial inequality and humanitarianism,” Goldberg said.

Duis said Goldberg was an engaging and thoughtful director.

“I really put a lot of emphasis on not making my character, Crystal, out to be the bad guy,” Duis said. “I wanted people to be able to identify with her. She’s not the villain. Sonia and I felt very strongly about this. Overall, it was a great experience being able to work with someone on their own material.”

Blevins agreed it was unique to work with the creator of the piece.

“Sonia was able to show us the research behind her work, the intention behind every carefully chosen word,” she said. “Sonia was able to clearly articulate us facts and stories about institutionalized racism, often reading directly from her sources.”

The entire creation process was a challenge for Goldberg, as both writer and director.

“When I think about my place as a theatre artist, it’s actress and writer; director was not here until it had to be,” Goldberg said. “It was hard, I approached directing as I would an actor. I know what good acting is, it’s what I went to school for. This whole directing thing is very cool.”

Goldberg said she hopes her play will get people to think about issues surrounding class, privilege and race, as well as institutionalized racism and how it is functioning today.

“Acknowledging white privilege leads to compassionate awareness,” she said. “There’s this insane hesitance and eye rolling and distance that happens in white individuals on this campus and everywhere when race is brought up,” Goldberg said.

Goldberg’s play has not only resonated with audience members, but also Blevins said working on “The Back Pocket Play” has had an impact on how she addresses these issues.

“Through this show I am now more thoughtful about my actions, judgments and notions of race and am also more willing, actually more eager, to have discussions about race in this country,” Blevins said. “My sincerest hope is that audiences went away with similar ideas.”

Goldberg said her main goal was to evoke a simple reaction from the audience.

“The entire point is that we have to start conversations about race and make sure they don’t end in uncomfortable silence,” Goldberg said. “I’m not trying to turn people into protesters, necessarily. I just want people to think about it.”

If you did not get a chance to see “The Back Pocket Play,” you might be able to see it in Chicago someday. Goldberg said she will try to have it be picked up by a regional theatre.

“I didn’t realize until [preview night] that the play had legs and could go somewhere,” she said. “I have a lot of contemplation and work ahead of me in how to get the show out there, but I would very much like to, especially because the whole concept of regional theatre is shows that speak to the region, the city, the people in the city.”