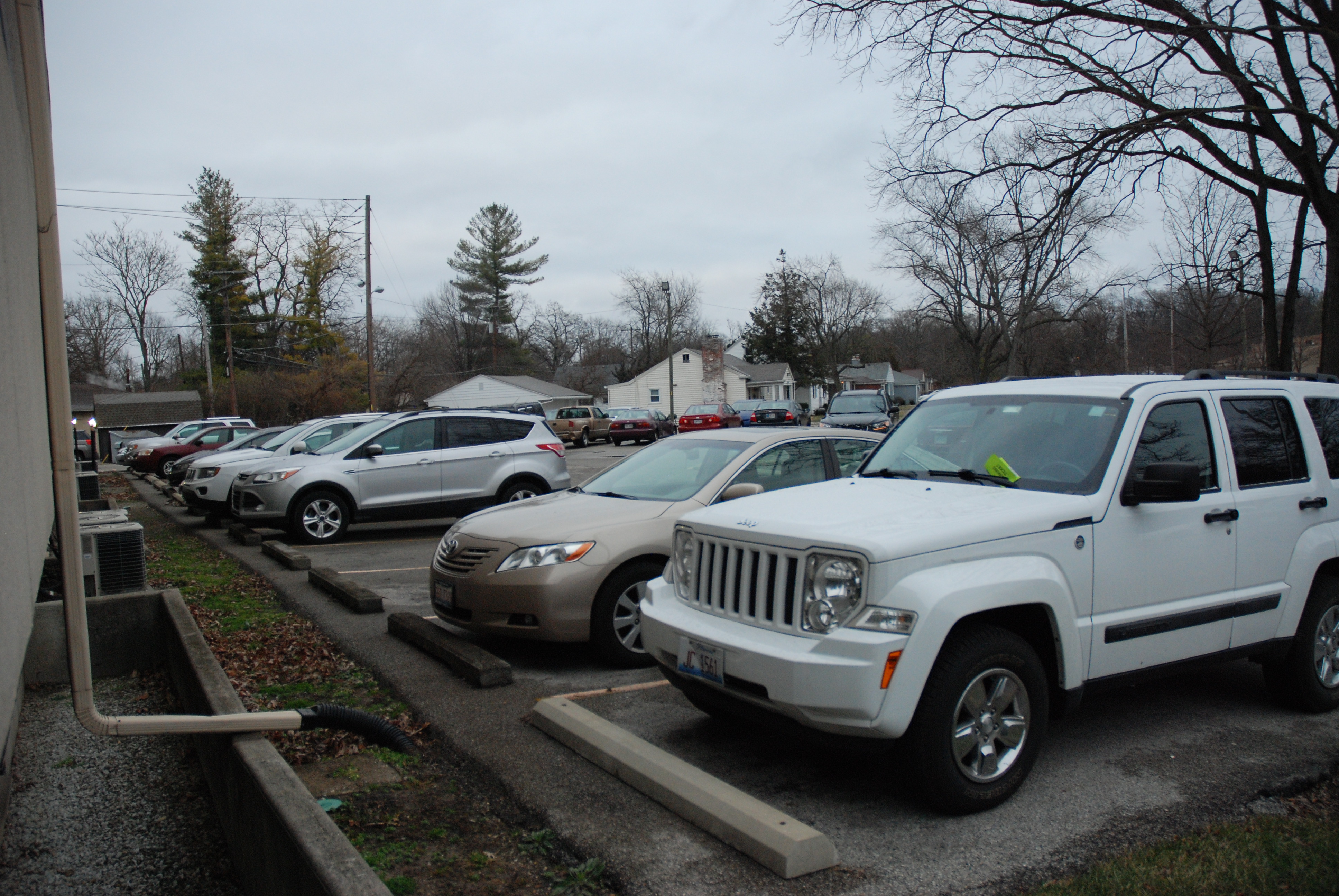 If you make your way to the Parking and Transportation Services office, a sign on the door stops you. “Student decals B, G and I are sold out,” it reads.

Jeremy Moore, associate director of parking and transportation, said this semester was the first time he ever told a student he could not sell them a parking decal.

“Which is really tough to say, because they’re right there with you,” he said. “You know what it means to them to have a car.”

Between the three kinds of permits there are a little less than 1,000 spots. There are roughly 350 B spots for students who live in ResCo, Fairview House and Ross Hall. About 240 G, or Greek, spots are available, and the I lot has 390 spots for anyone who lives on campus. Moore said those on the waitlist — a little more than 20 students — received temporary passes for the parking lot by the tennis bubble.

“A lot of them kind of feel like it’s a two-week waiting period where they should be getting a decal,” he said. “But really it’s two weeks so that they have the opportunity to take their vehicle home or find other arrangements. If they get a decal, that’s the best possible scenario.”

Junior English creative writing and Spanish major Elena DeCook is on the waitlist, but did not obtain a temporary pass. Since she studied abroad last semester, DeCook said she did not think it necessary to get her G, permit until this semester.

“The lady at the desk asked if I was parking on campus, which I was, and she told me I should try not to because I’d get ticketed,” she said. “I already had been ticketed, but you got to do what you got to do.”

DeCook said she parked on a street slightly off campus since she was put on the waitlist. She has not been ticketed yet.

“I don’t know if it’s actually free parking or if I’m just lucky,” she said.

Moore said there is the capacity in the tennis bubble lot to hold those on the waitlist — unless it is a basketball game day.

HV permit holders, students who live in Apartment Village, must move from the Hinkle Fieldhouse spots on game days, typically relocating to the tennis bubble lot. At the beginning of the school year, students living in AV received an email stating, “Overflow parking can be found in the I lot.” Now, with those spots sold out, parking is limited.

Kelsey Davis, junior marketing and art + design major, lives in AV. She said she is already annoyed by how much she has to pay for a pass and how often she has to move her car. But she said she has not really noticed the extra waitlisted students by the tennis bubble.

“But then again how can I notice less spots being available when there were so few spots to begin with,” she said.

On Monday, AV residents received another email for parking instructions for the last four home basketball games. On those days, HV permit holders will be able to park in surface lots on campus designated for A decals.

DeCook said she believes most students obtain permits at the beginning of the year, leaving little leeway for those like herself who apply second semester. Recent construction has also limited parking, she said. To help with the problem, she suggested the university prohibit first years from having cars on campus.

“They would all hate me for saying that,” DeCook said.

Moore said this is not something the university wants to do.

“It’s been run up the flagpole so that people realize we need to find a long-term solution,” he said.

Stephen O’Connor, sophomore biology major, is on the Student Government Association Student Initiatives Board. He is also a student representative on the parking committee, and believes the board will not pursue this option.

“It is a selling point for prospective students as well as being an issue for [first years] who have off-campus jobs or who have other reasons to have a car,” he said. “It is difficult to prioritize whose needs are more important.”

Moore said a “decal buy-back” is one solution already in place. At the end of the semester, if a student is not using their decal, the parking services will buy it back at a reduced rate. B and G decals originally cost $225. If a student takes their decal to parking services, the student will receive $80. These permits will the be passed to another student who needs it.

Meanwhile, Moore said he has encouraged students to use services like IndyGo and BlueIndy.

“Being landlocked, there is a real struggle with parking and especially with the increasing size of classes, it is going to be difficult,” O’Connor said. “However, the university is trying to push BlueIndy and IndyGo so that students don’t feel the overwhelming need to have a car just to go somewhere once a week and that they have other means of transportation.”

Moore has also gone through the list of winter graduates, and those who withdrew and chose to study abroad this semester. These unused spots can be sold back to students needing decals this semester.

What did DeCook say when asked what would happen if she cannot get a permit?

“Honestly? Keep parking there and hope for the best.”

Moore said he wants to extend the decal buy-back until Feb. 28.