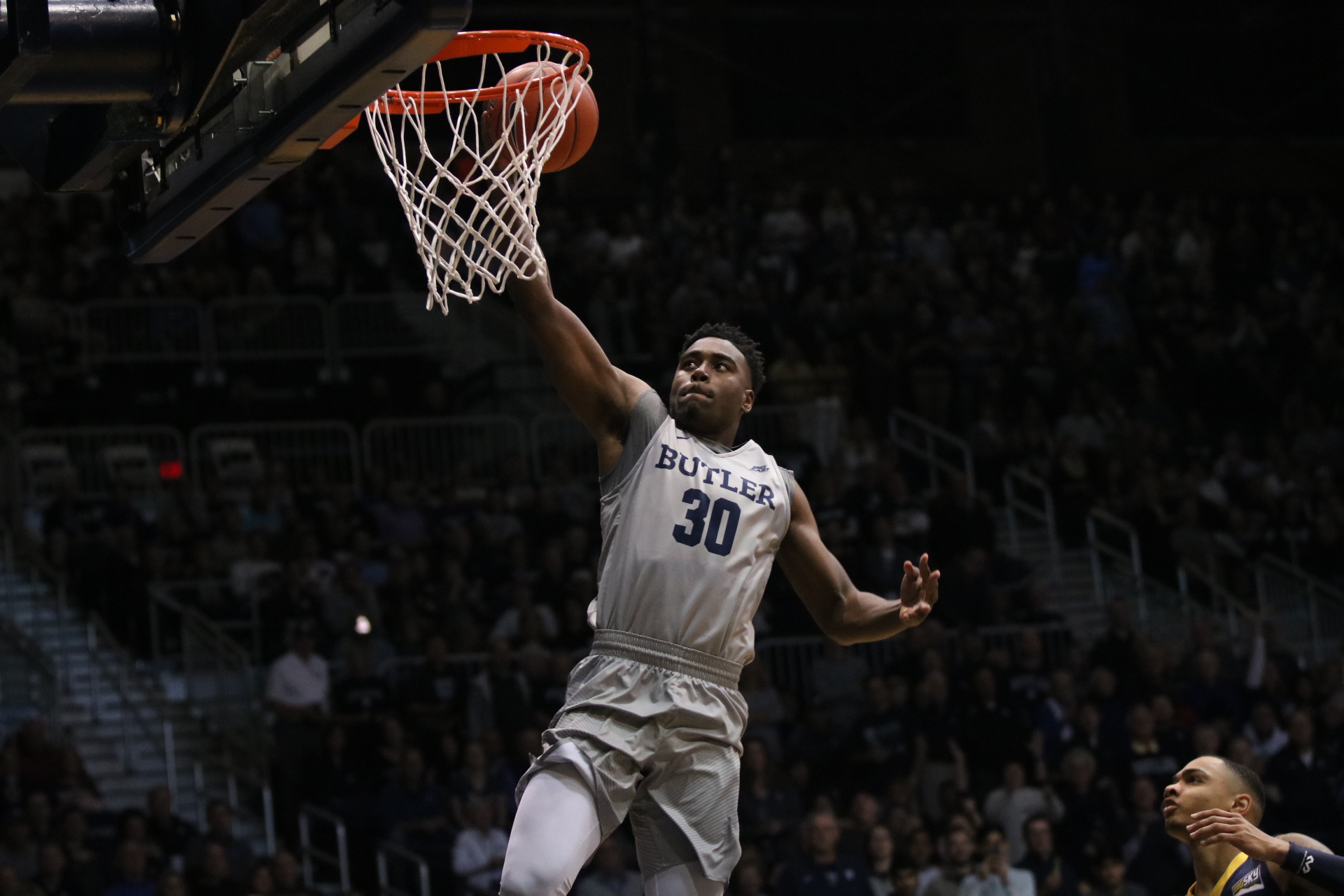 Kelan Martin rises for a dunk in a game earlier this year. Collegian file photo.

Every story needs a beginning. Where then, do we begin when someone seemingly comes from nowhere?

His 6-foot-7-inch frame appears in the corner of your vision, thieving around a perimeter of plays painstakingly executed by opposing jerseys to block what the forward does next.

A drive to the basket — no wait. Stop. He stopped. Fake, crossover, dribble. Steps back with just enough space to snap his wrist. And all you need to hear is the ball whisk through the net.

And you know. He fooled you. Because you have no idea where Kelan Martin came from.

He’s an apparition exhaled by the fog of a system cultivated by colleges to weed out the best high school talent. Dangling statistics and rankings like fresh fruit ripe for the picking, players are delivered to basketball powerhouses, promises of a paved path to fame and glory.

The road to the University of Louisville is just minutes away from Martin’s high school, and Cardinals coach Rick Pitino promises the paved path. Only Martin is never offered a scholarship.

Pitino recruits Quentin Snider — Martin’s teammate at Ballard High School, Mr. Basketball of Kentucky and ranked one of the best point guards in the country.

As for Martin, where then, do we begin when the path from here to there is not so clear?

We start here. Russell Lee Park. Two basketball courts backdropped by a 24-hour Mesa Food factory. And maybe here is not so much a beginning, but a point between A and B, where friends hang out and after-school talk and basketball mingle in one breath.

Martin exhales. Drives for a layup. Then changes gears and drills a three on the next possession, because his parents always insisted on being an all-around player.

But is that really a surprise when your dad once played basketball in the same high school gym? He played in college too — has a NCAA Division II Championship title at Kentucky Wesleyan College to prove it.

And when you FaceTime mom everyday, conversations about classes and professors shift to basketball real fast, because it’s her jersey Ballard retired, and she was at Kentucky Wesleyan playing for an NCAA title, too.

His parents see their son’s basketball potential. Martin quits football his sophomore year in high school, the risk of getting hurt outweighing his receiving days.

Basketball it is. But you don’t see him. Not yet. Not the way you see him now.

“Sometimes I just wanted to hang out and get away from basketball my freshman year — and a little bit my sophomore year,” Martin said. “I just wanted to be a regular kid and not play athletics.”

But regular kids don’t get calls from coaches at Xavier University and West Virginia University.

“My parents were on me,” Martin said. ‘You can hang out with your friends anytime, but this basketball stuff can take you places. They always said they see a bright future in me.”

“What are you doing to get better? What about your footwork? Can you play better defense?” His parents are there, the same way they’ll be at almost all his collegiate games asking the very same questions.

Bridging his index finger and thumb together, the remaining fingers form threes. Each hand lifts, framing his eyes to form makeshift goggles. Martin keeps the trademark from high school, and fans know — No. 30 is feeling good.

Off the court, his quietness is so overt in contrast to the extroverted nature of his roommate Tyler Wideman, team manager Davis Furman initially labels Martin as shy.

“He just kind of sat back and observed the room,” Furman said. “After a couple of weeks, he definitely became one of the more social guys.”

“Say less.” He tweeted that once, nine characters punctuated by an emoji with zipped lips. The art of communicating without any further words. Furman sees Martin master it in practice.

A series of dribbles dispensed along halfcourt with crossovers dropped in every few steps to evade invisible opponents. Then, a progression of shots off the side hoop rolled out for practice. A spray of almost 50 or more close range shots from each possible angle. Directly from the side, 45 degrees now, repeat. Hardly missing more than two consecutive attempts, lips pursing on the third shot when he does.

He’s eating healthier. The summer before his sophomore year, Mom cooks fish at his request, and Martin’s body composition improves more than anyone on the team..

“I dropped some weight, I felt lighter,” he said. “I came back for open gym, and everyone was like, ‘You got skinny.’ And I was like, ‘Really? You think so?”

Outside the occasional gas station run for Starbursts, the fridge stockpiles with vegetables. Martin repurposes an empty gallon of milk into a water bottle and takes it everywhere.

Roosevelt Jones and Kellan Dunham graduate the following year, taking much of Butler’s offense with them. Martin’s a junior now, and everyone is waiting for him to step in.

Martin is named to the Preseason All-Big East First Team weeks before conference play for the 2016-2017 season opens. He doesn’t admit to the pressure, deflecting the brunt of questions about individual laurels to his teammates.

Name dropping senior Andrew Chrabascz, and all the things freshman Kamar Baldwin brings —not to lighten to load on his shoulders, but to insist on a sense of equality that comes with playing the game the right way.

Coming to Butler, that’s all he wanted to do. Certainly his unassuming personality never allowed for him to expect this?

Why stop? His dad tasted a championship; his mom saw a Final Four run. There’s a legacy he can leave at Butler. Every college basketball school is working to be in the same position — but he’ll outwork them, outcompete them.

And he might be not be there yet. But he’ll get there. And when everyone asks where did Kelan Martin come from? Well, he’s been here the whole time. Waiting.

And the way Martin walks off the court, that’s exactly what he’s doing. Intentionally pacing his stride; no hesitation, but deliberation in his tread.

That’s the funny thing about waiting. It doesn’t always imply a standstill. Sometimes you’re just doing your own thing, waiting for everyone else.