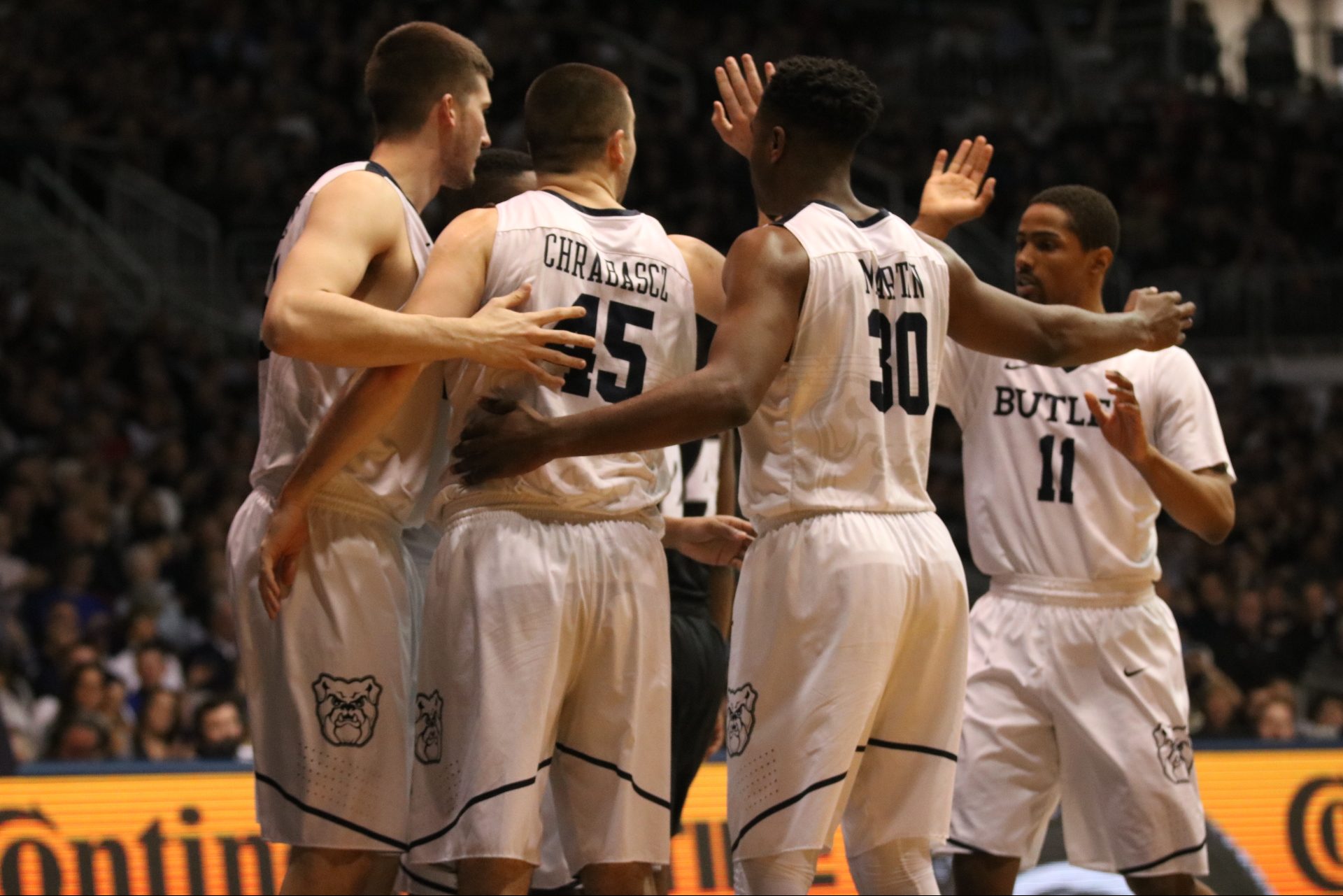 The team huddles up during a break in the action in a contest earlier this year. Collegian file photo.

The No. 11 Butler University men’s basketball team picked up a stout road win against the Seton Hall Pirates by the score of 61-54 at the Prudential Center in Newark, N.J. on Jan. 25.

Three key moments down the stretch allowed the Bulldogs to pull out the win. Kamar Baldwin hit a three pointer with just under three minutes left to extend the team’s lead to 55-49. With 2:02 left, Kethan Savage drove the ball to the rim and converted an and one layup. Andrew Chrabascz then extended two offensive possessions with back to back offensive rebounds around the one minute mark.

Chrabascz bounced back from a rare zero point performance against DePaul by leading the Bulldogs with 16 points. Savage and Kelan Martin each recorded double doubles on the night. Savage scored 15 points and grabbed 10 rebounds while Martin finished with 10 points and 11 rebounds. The other Bulldog in double figures scoring was Baldwin with 12 points.

Chrabascz: "It was sloppy on both ends. We had to out-grit them, especially when you're at their place."

Despite scoring 10 points, Martin continued a stretch of poor field goal shooting with a 2-of-10 performance on Wednesday.

“It was a rugged game,” said head coach Chris Holtmann via butlersports.com. “I have a lot of respect for Seton Hall because of the battles we’ve had with them over the years.”

Seton Hall (13-7, 3-5 Big East) dominated Butler on the boards with 52 rebounds compared to 43 for the Bulldogs. Angel Delgado had 22 rebounds himself and ended up with a double double after scoring 12 points too. Khadeen Carrington and Desi Rodriguez each had 12 points for the Pirates as well.

With the win, Butler (18-3, 7-2 Big East) is now tied at the top of the Big East standings with the No. 1 Villanova Wildcats. Also, Holtmann is now 5-0 against Seton Hall, and the Bulldogs have won five games in a row against that opponent.

Butler continued their trend of poor offensive first half performances against the Pirates. This time however, the Bulldogs ramped up their defensive efforts and held Seton Hall to the lowest scoring output in one half the Big East has seen all season. The Pirates shot 21% from the field in the first half, which led to a 26-19 Butler lead at the break.

The Bulldogs will return to Hinkle Fieldhouse on Jan. 28 to face the Georgetown Hoyas for the second time this season. On Jan. 7, Butler beat the Hoyas 85-76 in overtime on the road. CBSSN will broadcast the game, which tips at 8 p.m.

BIG SHOT BALDWIN. The freshman does it again for @ButlerMBB.

Bulldogs up 55-49 with under 3 to play on @FS1 pic.twitter.com/MgmhgfFXEJ