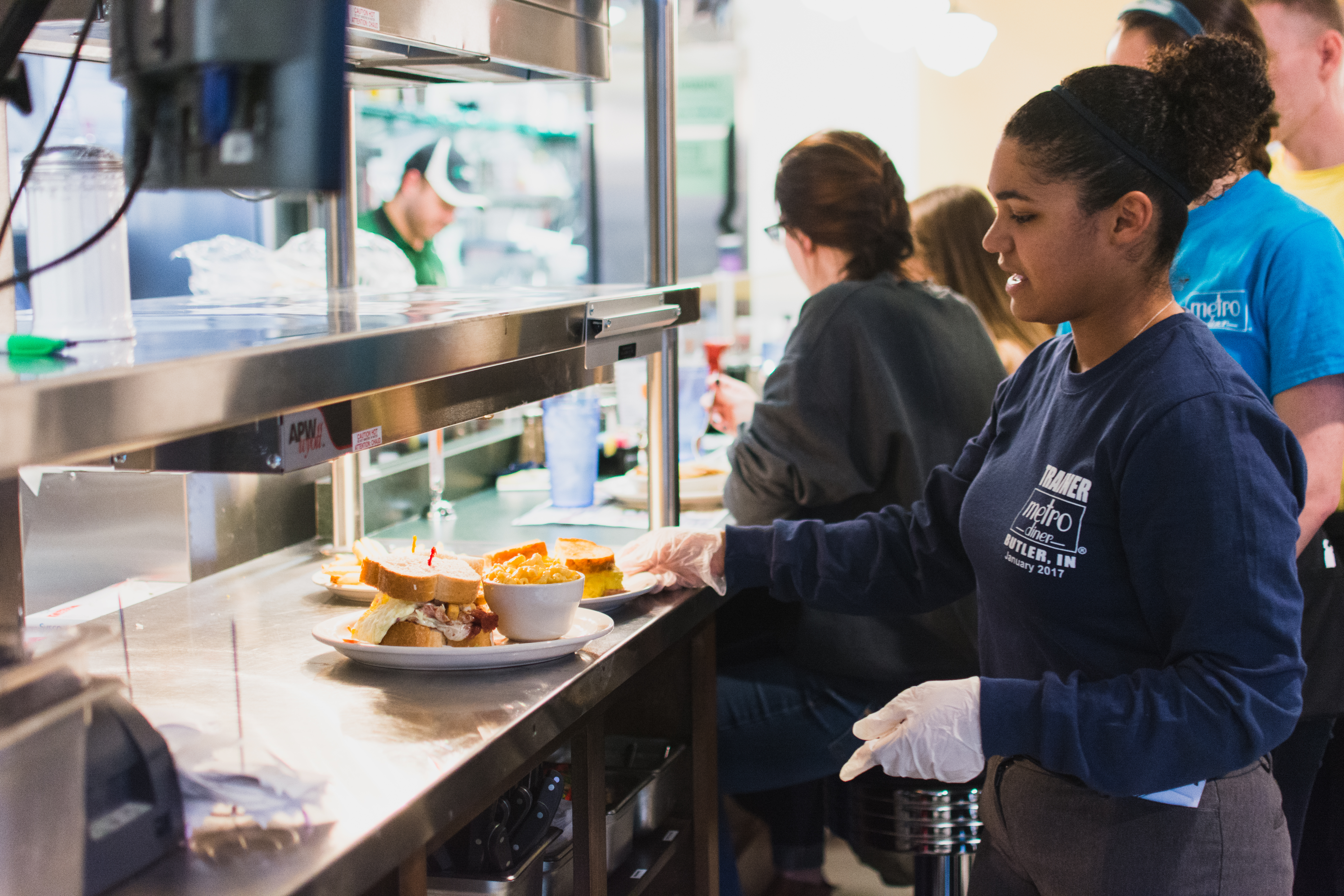 Metro Diner hosted a soft-opening over the weekend, offering a sneak peek of the menu and allowing a real-restaurant experience for the new employees. The diner officially opened on campus Jan. 17.

Metro Diner’s slogan, “Where the Locals Eat,” embodies the attitude of the restaurant.

Joint venture partner Bern Rehberg said they were not sure if they should feature that slogan because they need to “earn the right first.”

“We have to continue to work every day, every guest, every meal to earn that kind of reputation,” Rehberg said. “The focus is getting to know them, learn people’s names, get to know their families. It’s special to me that, even though we have plans for growth, it’s still very much a part of who we are and what we do.”

Managing partner Troy Mink said one aspect of the slogan is being a comfortable, a happy place where people know your name.

Established by the Davoli family in 1992, Butler University will be the diner’s first college campus location.

Founder and chef Mark Davoli said he is blessed to be here.

“I think it’s such a unique setting for us,” Davoli said. “The neighborhood feels very much like the original diner.”

Rehberg and Mink took their staff trainers, who have travelled from different parts of the country, to the Butler v. Marquette men’s basketball game as a surprise.

Mink said he could not wait to walk on Hinkle Fieldhouse’s floor.

“We’re really jazzed up to be a part of things,” Rehberg said. “One of the first things I did when we signed this deal was go get my Butler sportswear and put my little Metro Diner logo on it, so I had the bulldog on one side and Metro on the other.”

Sophomore Eileen Hogan is a hostess at Metro Diner.

“It’ll definitely make a name for itself in the community soon,” Hogan said.

With so many student employees, Hogan said it will draw the attention of other students.

Wang said throughout her meal, multiple managers stopped and talked, asking for her and her friends’ names and if they were enjoying the food. One of the managers mentioned how Butler has the spirit the original diner had: very homey and genuine.

Wang heard about the event through her sorority’s group message, where first-year Cheyenne Dishman announced the news.

Dishman works as a waitress at Metro Diner. She used to work at Scotty’s Brewhouse on 96th for carry-out, but never had the social interaction with the customers that she does as a waitress.

“It’s very hectic because you’re doing so many things at once,” Dishman said. “I was making sure guests’ drinks were always full, their food was coming out fine and figuring out which food was the correct food. Everyone’s on top of each other and everyone’s nervous, especially during the soft-opening.”

All proceeds from the soft-opening benefitted Indianapolis Children’s Choir and Immaculate Heart of Mary Men’s Group in support of St. Anthony School.

Rehberg’s business partner has a daughter who sang in the Children’s Choir, which is located on campus. He said part of the reason why they looked into the campus location was because before Scotty’s Dawghouse opened, there was never a place to eat during choir practice.

“The relationship here with the staff and the culture and even with the students we’ve hired is just phenomenal, friendly and helpful,” Mink said. “It’s a special campus. If I reach out to someone, if they don’t know who or which avenue, they find out, they put us in touch. It’s a very tight-knit university. I think it’s a great fit with Metro Diner.”

“I’ve always been taught that you treat people the way you want to be treated,” Szalay said. “That’s what Metro is about. And I know that’s what Butler is about.”

Mink said the home-quality meals will appeal to students.

“The food is home-cooked, made from scratch, what you get when you go on Thanksgiving break,” Mink said. “At my years at Metro, I’ve seen people bring their parents in and say, ‘you’ve gotta try this, it tastes just like at home.’”

Wang ate the pot roast. She said she did not even need a knife because the beef was so tender.

“It was very good, very hometown, very comfort food,” Wang said. “It has hometown favorites, but also has crazy creations, like their special french toast, that my mom would never make but are still good nonetheless.”

“It’s kind of like a little oasis where you don’t have to worry about what you wear,” Rehberg said. “You’ll see people in here with coats and ties, and people are probably here with pajama bottoms.”

Mink added that he will probably see a lot of those during finals week.

“They don’t call us team members, they call us a family,” Hogan, one of the hostesses, said.

Metro Diner wishes to become a place where students can be known as locals, free to order pancakes for dinner or drink a cup of coffee in pajamas.