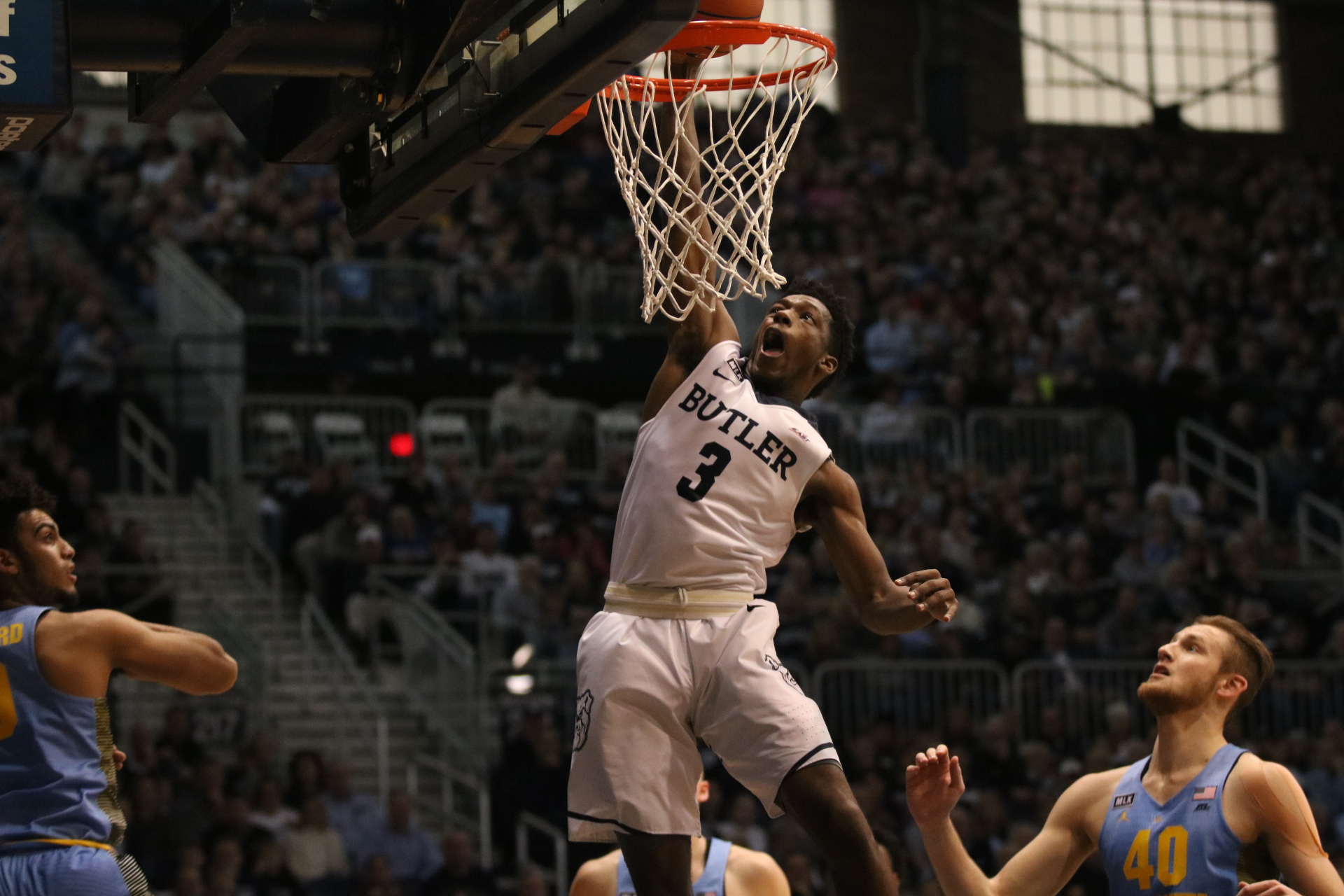 Baldwin rises for a dunk attempt in the first half against Marquette. He finished the game with 18 points. Photo by Jimmy Lafakis.

The No. 13 Butler University men’s basketball team was in legitimate danger of losing their undefeated record at home this season after trailing the Marquette Golden Eagles 41-25 at halftime on Jan. 16. Twenty minutes and 63 second half points later, the Bulldogs walked away from Hinkle Fieldhouse with an 88-80 comeback victory.

“What an interesting game and a roller coaster in a lot of ways,” head coach Chris Holtmann said after the game. “We just needed to respond, and the guys in the locker room really responded.”

Kelan Martin, Kamar Baldwin and Kethan Savage each attributed to the second half turnaround by attacking the rim and either finishing the close shot or earning a trip to the free throw line. Avery Woodson and Tyler Lewis made clutch three pointers during Butler runs in the second half as well.

Martin led the team in scoring and rebounding with 22 points and seven boards. Baldwin notched 18 points while Savage was close behind with 17 points of his own. Lewis and Andrew Chrabascz each scored 10 points.

“In halftime, coach came in, and he was very upset with our play defensively and offensively in the first half, and we knew we can guard better than that,” Martin said. “For me, my mindset the whole game was to attack the rim.”

Highlights from today's huge comeback win! Dawgs were down 16 at the half, 18 early in the second half, and won this one, 88-80. pic.twitter.com/jDPxvXljbo

Butler’s first half struggles continued as they scored a mere 25 points after the first 20 minutes of play. Unlike the Xavier game however, they trailed 41-25 at the half against the Golden Eagles. Marquette capitalized on open looks from three point range by taking a 7-of-15 three point field goal mark into the locker room.

“Teams are shooting way too high a percentage against us and that’s a concern,” Holtmann said.

Marquette’s freshman guard, Markus Howard, led all scorers with 26 points on a 10-of-18 shooting display. As a team, the Golden Eagles shot nearly 50% from the field and 40% from three point range.

Holtmann said their ability to get to the free throw line and the fact this game was played in Hinkle were two “critical” factors in their comeback victory. Butler also committed zero turnovers in the second half to help their cause and shot a remarkable 70% from the field.

The Bulldogs are 11-0 this year when out rebounding their opponent as they grabbed 32 boards to Marquette’s 28. Also, the team hasn’t lost under Holtmann when scoring 80 or more points (30-0).

The win moves Butler’s record at Hinkle this year to 11-0 and pushes their overall home winning streak to 14 games. However, the Bulldogs won’t have the luxury of their home crowd to energize them for a second half comeback when they travel to Chicago to face the DePaul Blue Demons on Jan. 21. Tip off will be at 2 p.m., and the game will be broadcast on FS1.