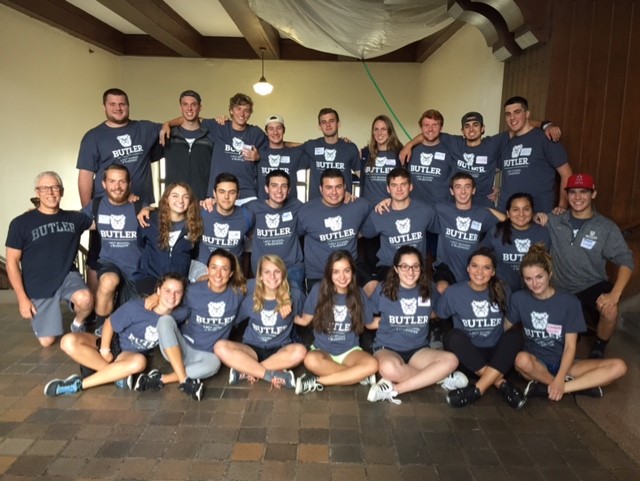 From a company of over 50,000 employees to managing 93 students, career mentor Randy Brown’s transition to Butler was a bit of a downsize.

After 33 years working in human resources and climbing the corporate ladder, Brown left it all behind for a little change of pace.

“I decided when I was 55 I wanted to stop this,” Brown said.  “This is great, but I want to do something else, more in the give-back realm and that’s when I found Butler and started doing this.”

To make the change, Brown said he had to ask himself the same questions that he has his mentees ask themselves.

“You get to do anything you want, you’ve got to ask yourself  ‘Well, what would that be? What do I like doing most?’” Brown said. “At the end of the day what I liked doing most in my business career was sitting down one-on-one with individuals and helping them realize their goals.”

Brown made the change only a few years ago, and the first years he was assigned to then are now finishing out their junior year.

“Truthfully, I was a bit nervous to have a first-time career mentor because I thought he wouldn’t know much, but he has surprised me time and time again,” Olivia Sutton, junior finance and economics major, said.

Sutton is not alone. Despite only being at Butler for a few years, Brown has shown a dedication to helping students that goes above and beyond his role as a career mentor.

“He even adopts a bulldog from Indiana Bulldog Rescue every year that our group sponsors,” Sutton said.

Brown’s extra investment in his mentees comes from a desire to see them become more involved. Students can learn just as much through real world experience as they do in the classroom, Brown said.

Junior marketing and finance major Logan Schwering said he was excited to be a part of “Team Randy.”

“He has developed quite the positive reputation throughout the Lacy School of Business, and it seems almost all students are familiar with him,” Schwering said.

As with all career mentors, Brown meets with each of his students at least twice each semester, but his students often text or call him whenever they need guidance. He has made himself so available to students that his wife will no longer let him call it a part-time job.

“One of my favorite things about Randy is his selflessness and desire to put others first, whether it is his own family, fellow staff members, students or even those he does not know,” Schwering said.

Brown stands out as a career advisor not only because of his impressive corporate background, but also because of his other life experiences that he uses to help guide students.

As the first in his family to go to college, and someone who has started over in a new place twice, he is able to bring a unique perspective to students about to start their lives.

“Not only does Randy help us so much professionally and academically, but he is inspiring and always keeps our group smiling,” Sutton said. “Butler is so lucky to have him and he is truly transforming the mentor program.”

He said he chose mentoring Butler students as a way to give back because he sees college as a fascinating time in people’s lives unlike any other. Upon coming to Butler, Brown said he was surprised by the quality of the students and the fact that they are great people is part of why he likes working here.

“My wife says that even though I was pretty happy in my career, she thinks I am the happiest now that she has ever seen me,”  Brown said. “It’s just because it’s joyful work.”