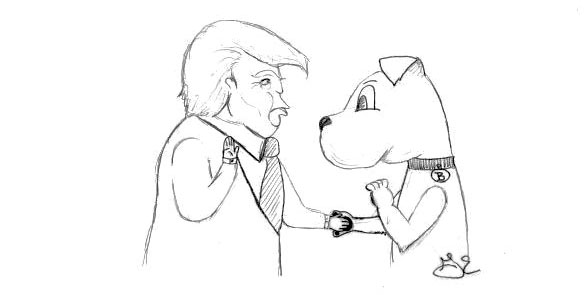 President Donald J. Trump was sworn into office 11 days ago. My facts will be current as of Jan. 29, as is the downside of static journalism; but, I hope to inform and enlighten on the political climate of the United States and how it affects you.

I am in no way denying there are multiple facets to the use of executive orders, both good and bad. They serve as one of the president’s most powerful tools and in some cases can help the president work around congressional gridlock, or help to enforce the decisions made by the judicial branch.

The danger in executive orders is the sheer fact that they allow the president to create directives that have the effects of legislation.

The refusal to carry out an existing law once a new president takes office is constitutional, as it is derived from the logical construct of two vital clauses in the Constitution: the Presidential Oath Clause as well as the Take Care Clause.

It is this vital aspect of the executive order that will be of incredible importance as the president proceeds with the policies he has initiated. Before continuing, I will now list the 13 executive orders he has issued as of Jan. 29.

Heads of agencies have been allowed to waive the requirements of the ACA to the “maximum extent permitted by law.”

All regulations in process have been frozen until the president, or an agency after he took office, approves them.

3. No federal funding for abortion services.

4. Withdrawal from the Trans-Pacific Partnership.

Permits for the Dakota Access Pipeline have been ordered to be approved, and TransCanada has been invited to resubmit is pipeline permit application.

Agencies and the Chairman of the White House on Environmental Quality have been ordered to work together so they can set up new deadlines and environmental approval for infrastructure projects of a “high priority.”

Commerce secretary ordered to produce a plan ensuring all pipelines have American made steel to the “maximum extent possible.”

Commerce secretary ordered to begin a 60-day review of regulations for American manufacturers, with the goal of expediting permitting.

Agencies have been directed to increase deportations of those in the United States illegally with a list that categorizes people of priority.

Those convicted of a crime, charged with a crime or have committed a chargeable offense

Those who have misrepresented themselves to the government.

Those who are under deportation and may “pose a risk to public safety or national security.”

Trump orders immediate construction of a wall on the southern border of the United States as well as additional detention facilities at or near the Mexican border.

The United States refugee program has been suspended, and none may enter for the next four months.

That is a lot of controversial policies, and it has not even been a month.

How has this affected the political climate of the United States? Well, the short answer is a lot. The long answer is difficult to define, and not enough time has passed to be sure.

The executive order receiving the most attention within the last few days is that which bans entry to the United States from the seven countries named by the president.

Shortly after this executive order, two Iraqi men led a lawsuit against the president’s directive. This resulted in the American Civil Liberties Union announcing that a New York Federal judge granted an emergency stay in response, effectively pausing the order’s effect.

A small win for checks and balances as the president seems hell bent on banning immigrants and refugees.

Protests erupted after this executive order, with many United States airports filled with thousands of people demanding the release of travelers from the seven banned countries. How does this apply to the Butler Bubble?

Look around. Your friends, your family members, your professors, your peers, your classmates all have the potential to be affected.

There are people around us whose family members will not be able to be reunited for who knows how long as a result of this ban. There are students who were accepted into Ivy League universities in the United States that will no longer be able to come here to learn and to be granted the opportunity they worked to achieve.

There is no telling which of those around you are being affected by this order, or by the many others that have the potential to do harm to your peers, but the damage is being done.

It is now up to you not to be the bystander, disagreeing in thought and word rather than with action. Checks and balances and separation of powers cannot reach their potential to ensure a fair and just government without the support of the American people.

Martin Luther King Jr. and former President John F. Kennedy have both been quoted saying, “The hottest place in hell is reserved for those who remain neutral in times of great moral conflict.”

Do not maintain your neutrality or your complacency. Rather, recognize your privilege and fight so that others can have a chance at the life we so often take for granted.