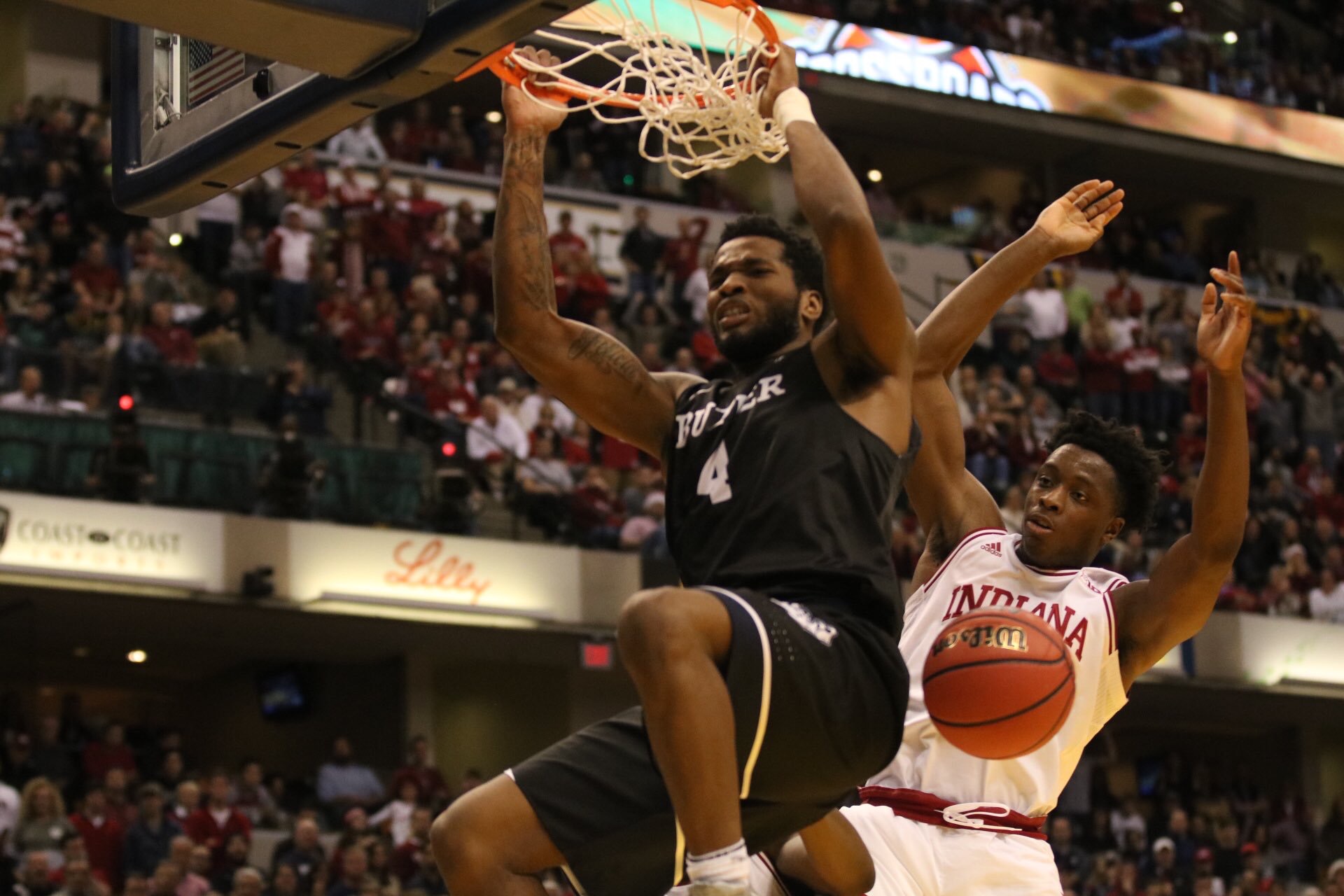 The gales of Tyler Wideman’s life shift him around. He bounds from place to place, always learning as he goes.

His environments may change, but one trait remains constant: dedication to his craft.

The junior forward is averaging over eight points and five rebounds a game for the Bulldogs. He is also shooting at a .663 clip on the season, trailing only Nate Fowler for the team lead.

He showcased a penchant for consistency from the moment he stepped on campus. He has never missed a game in three years. Last year, he started all of Butler’s 33 games and has started 18 of this year’s 19 contests.

The man who goes by the nickname “Big Cat” is quite fierce on the court. He has become a fan favorite by doing the dirty work, cleaning the glass and scoring paint baskets.

But to truly know this affable, loving giant, you must dive deep into his past.

Wideman hails from Schererville, Indiana, and finished his high school career at Lake Central. He averaged nearly 16 points and more than seven rebounds a game as a high school senior. He was the Times of Northwest Indiana’s “Times Player of the Year.” He was nominated to the 2014 Indiana All-Star Team and was a 2014 First-Team All-State selection.

But basketball did not always come so easily for him.

“In fifth grade, this big guy walked into our AAU practice and we were all like, ‘Wow, he’s huge,’” Wilburn said. “But he couldn’t walk and chew gum at the same time, let alone shoot the ball or dribble.”

As their lives went on, the two “T-Dubs” became inseparable. Wilburn said his friend’s good nature made trusting him on and off the court easy.

“He’s more like a brother than a friend,” Wilburn said. “Because I spent a lot of time with him, I know that he is the silliest person you will ever meet. In his free time, he loved to be a DJ on my dad’s keyboard — his name was DJ Wuggy on the Beat.” That nickname stuck, and Wideman also goes by “Big Wug” now.

When Butler called Dave Milausnic, Lake Central head coach, to receive stats and accomplishments for the program, he only told the university one thing.

“We said we played in the 4A state championship,” Milausnic said. “That was the only stat that mattered to Tyler. Most kids know their All-State teams, points per game and rebounds per game.”

The 6-foot-8-inch player was the first recruit of Brandon Miller, former Butler head coach. Wideman said he has adapted to a completely different lifestyle in Indianapolis.

“In high school, you didn’t have the nutritionist telling you about the right things to eat, you weren’t really worried about getting proper sleep, things like that,” Wideman said. “It was just lifting and playing basketball. You would go to McDonald’s and call it a day.”

The lessons Wideman were taught at an early age still apply. He said the value of hard work was instilled in him when he was young.

“I’m always trying to help the team be better any way I can,” Wideman said. “I am just focused on doing whatever the team needs.”

He said he considers junior forward Kelan Martin his best friend at Butler. The frontcourt mates were roommates in Ross Hall during their freshman year. Martin said Wideman’s easy-going personality made it easy to click with him.

“He’s a big teddy bear,” Martin said. “He’s loving, caring, and sets a great example on campus. You can talk to him about anything, and he is just always there for you.”

Martin and Wideman made efforts to cut weight so they could improve their quickness and mobility. Both of them saw their mile times improve significantly. Martin said he admired Wideman’s dedication to keeping a balanced diet.

“The big guy and I go through things together,” Martin said. “We’ve had to adjust to many things, and having him right there with me is great.”

In the distant past, he was not nimble, and he struggled to gain agility. But now, some might say Wideman is a lean, mean post machine. He said he has always learned the most from keeping his head down and working.

“It’s always been something I’ve done, no matter where I’ve been,” Wideman said. “I just have fun and try to enjoy my work as much as possible.”

Ferocity is part of his on-court persona. Catch him outside of Hinkle’s hallowed walls and windows, and you are likely to find Wideman grinning from ear to ear, spreading that gap-toothed smile as far as humanly possible.