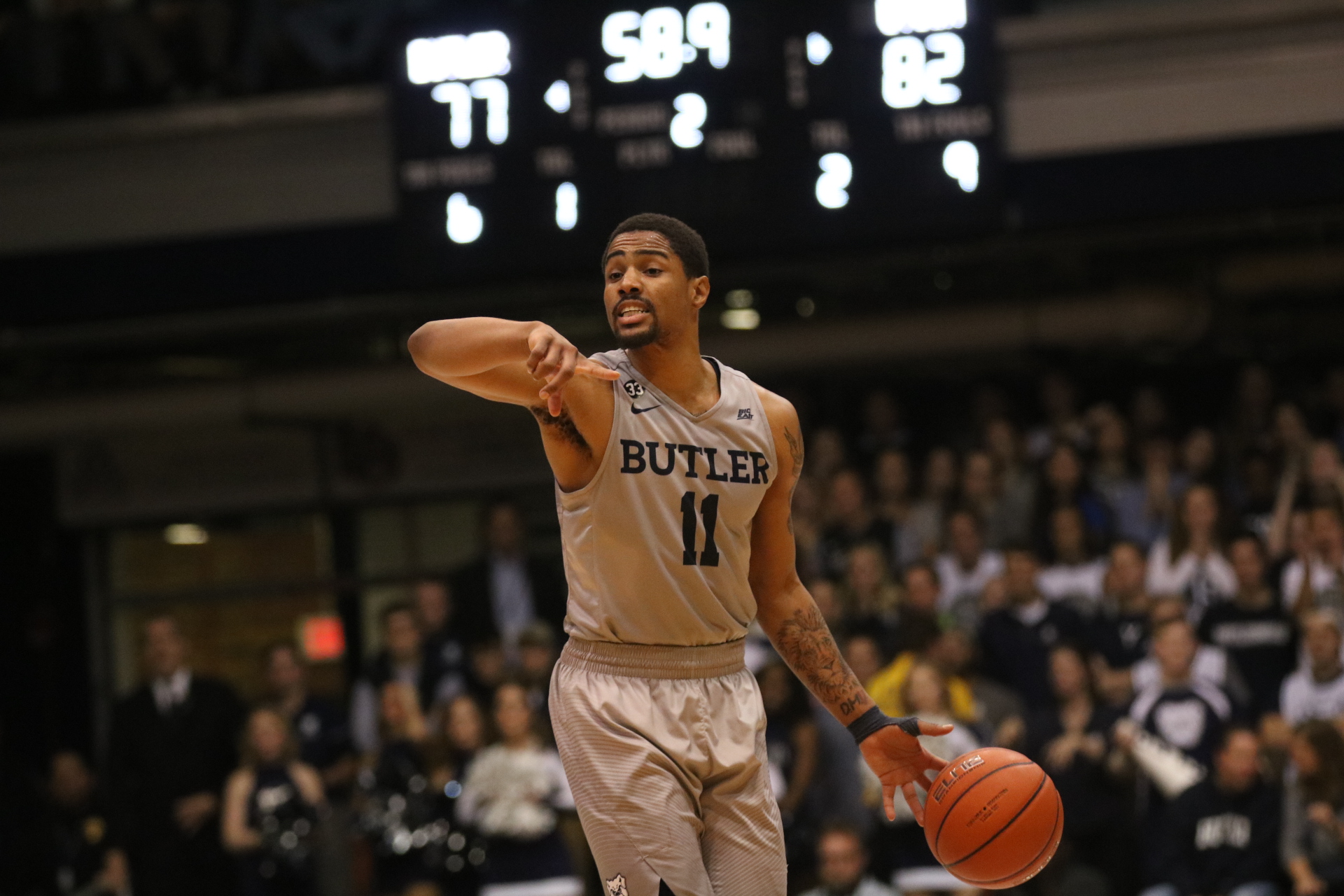 Over the past four seasons, the Butler basketball program has relied heavily on transfer players to fill voids in their roster. Currently, the No.16 Bulldogs feature four transfer players. One of those transfers, redshirt senior guard Kethan Savage, is beginning to make an impact in the program.

Savage transferred to Butler after his junior year at George Washington University because he wanted to play on a team more suited to his skillset.

“Honestly, I transferred because Butler plays a different style,” Savage said. “They play a type of basketball that plays to my skill set and what I can bring to a team is better suited to a team like Butler.”

Savage also mentioned his growth since his departure from George Washington. The 6’3’’ guard said at George Washington fans saw him as a playmaker, not a point guard. Savage was an exciting player in his three seasons with the Colonials. He averaged 12 points per game in his final two seasons, and he also made ESPN’s Sportscenter’s top 10 plays with a monster dunk against the Ohio Bobcats his junior year.

“I relied on my athleticism a lot more at GW,” Savage said. “People considered me a dunker or a guy that gets to the rim. I think now I am more developed. I’ve settled into the point guard role. I’m continuing to improve my jump shot and defense.”

Savage’s best friend on the team is fellow guard Avery Woodson. Woodson is a graduate transfer from the University of Memphis. Both players made the move to Indianapolis because they wanted to play in the NCAA tournament. Woodson said getting an opportunity to play in the big dance was a clincher for both him and Savage.

“It definitely affected our decisions,” Woodson said. “Butler is known as a prominent NCAA contender. We both definitely wanted an opportunity to play on a great team for a great school that could get us into the tournament.”

“We took him because we knew we were losing Kellen, and we were having a hard time finding a replacement for Kellen,” Holtmann said. “It was paramount that we were able to find an older experienced guy like Kethan.”

After Holtmann made the trip to Savage’s hometown of Fairfax, Va., it took two days for him to commit to play at Butler.

“It was a relatively easy recruitment,” Holtmann said. “Some kids, you recruit for two years and you don’t get them. Some, you do. With him, it was a couple of days, but it’s been really worthwhile.’’

Due to NCAA transfer regulations, Savage was forced to sit out one season. Unfortunately, during this time Savage found himself preoccupied with a number of injuries. First, there was a torn labrum that required months of recovery and therapy. Then, right before the 2016-17 season began, Savage contracted pneumonia that required yet another surgery to fix a punctured lung which required one more month of recovery.

“It hurt me because I had to sit out a lot of practice,” Savage said. “Now that I have been able to practice consistently I can finally put all that behind me. Now I’m getting more comfortable, and I’m starting to find my rhythm on the court.”

Holtmann believes now that Savage is healthy, he will finally hit his stride.

“He’s gotten in shape after his struggles with illness, sickness and his torn labrum,” Holtmann said. “He missed a significant amount of practice time early on in the year. Just when we thought we were getting him back he’d be out for a week or two weeks. But now, he’s making gradual improvements offensively and defensively, and that is what is making the big difference in his play.”

After sitting out the first four games of the season, Savage made his first appearance in a Butler uniform when the Bulldogs faced off against the Vanderbilt Commodores in the Continental Tire Las Vegas Invitational. Throughout the rest of Butler’s non-conference schedule, Savage averaged only 12 minutes per game and 2.3 points per game.

Despite the slow start to the season, Holtmann refused to give up hope on Savage.

Once Big East play started up in late December, Holtmann’s promise became reality. Since the conference opener against St. John’s, Savage has made an impact on nearly every game. He is averaging nearly 22 minutes per game and 10.7 points per game.

Savage’s biggest contribution came on Jan. 4, when the then No. 1 ranked Villanova Wildcats came to Hinkle Fieldhouse. In a tight game down the stretch, it was Savage who put Butler on top 53-52 with 2:57 left to play. After a quick basket by teammate Kelan Martin, Savage stole the ball from Villanova’s Kris Jenkins, drove down the floor and scored while getting fouled. After finishing the and-1 Butler led 58-52 on their way to an upset victory.

In the preseason, Savage was projected to be the starting guard alongside Tyler Lewis, but after his setbacks early on and the emergence of freshman Kamar Baldwin, Savage now plays the role of sixth man. Savage said this did not discourage him, it just meant he would have to play a different role for the team.

“I just want to be a guy that helps us win,” Savage said. “Whatever Coach needs me to do, I’m going to do it. Whenever I’m in the game I’m going to play hard and play as aggressive as I can and try to help my teammates and team win the game.”

Savage is doing exactly that as he has thrived in his new role. Savage is the leader of a second unit that has been outscoring opponents by upwards of 16 points thus far. Savage is also making contributions individually, leading the four guards (Lewis, Baldwin and Woodson) in points per minute (.420), and points per 40 minutes (16.8).

Even though Savage continues to impress everyone on the court, Woodson said his locker room presence is his biggest asset to a young Butler team.

“He’s a very calm person,” Woodson said.  “He never gets too high or too low. He brings a maturity that the young guys look up too.”

After all Kethan Savage has been through in the past three years, he is finally getting to live out his dream of playing against some of the best teams the nation has to offer. Despite numerous setbacks and injuries, Savage is proving himself to be one of the most effective players in the Big East Conference.