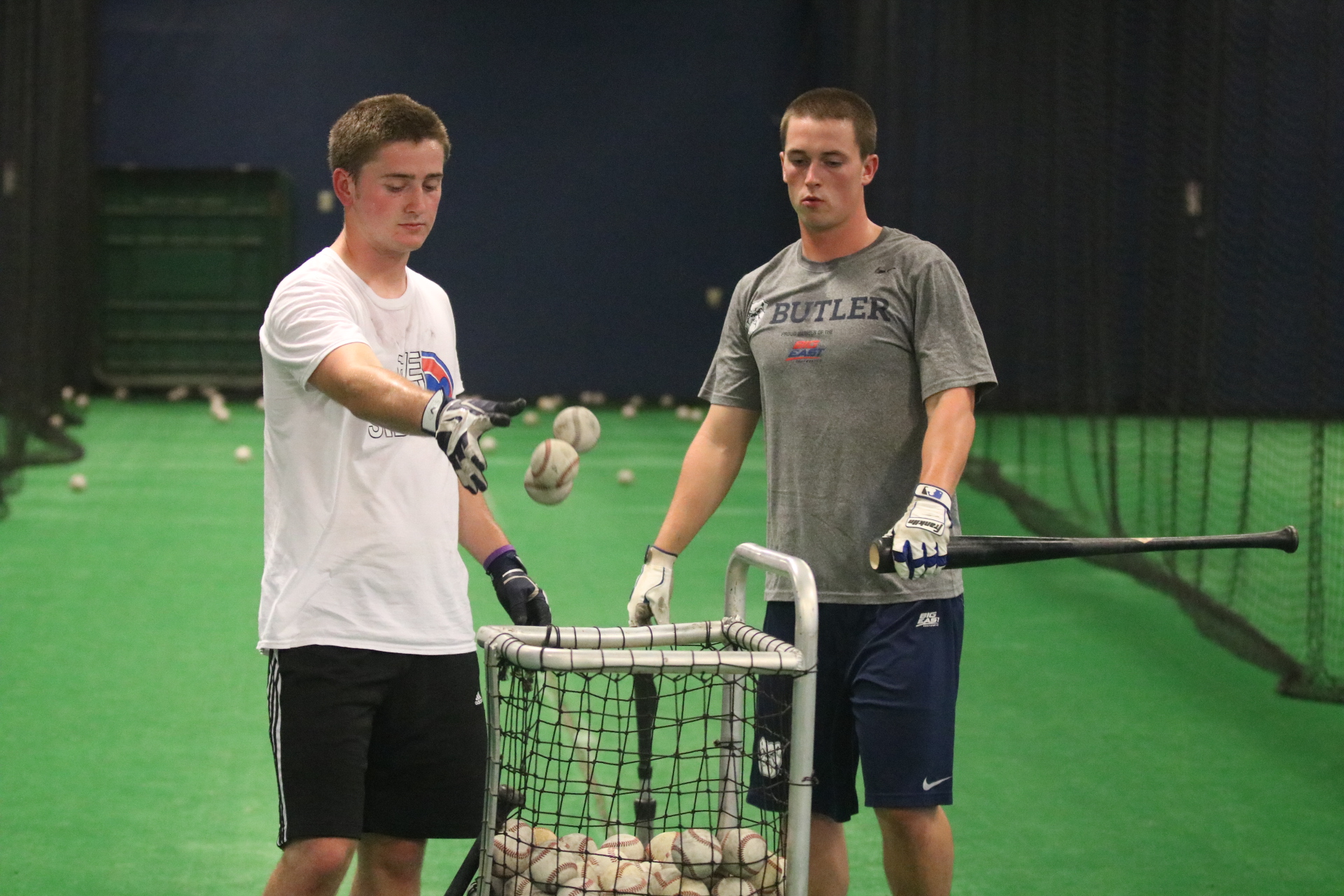 Zach Parker (left) and Gehrig Parker (right) finish up a hitting session in the batting cage. Photo by Jimmy Lafakis.

A bond with a brother is a bond like no other. Not one, but two pairs of brothers will lace up their cleats for the Butler University baseball team this season.

Both younger brothers are new to the team. Zach transferred from Division-II Lewis University in the fall and must sit out this season due to NCAA rules. Connor Christman will compete for playing time at third base.

This is not the first time the brothers have worn the same uniforms. The Parker brothers hit the diamond for Maine South High School in their hometown of Park Ridge, Ill. When they were upperclassmen, Zach caught for Gehrig ﹘ whose knuckleball elevated him to the staff’s No. 2 pitcher.

“He was a joy to catch,” Zach said. “But it sure was tough to catch his knuckler.”

Connor and Garrett won a state championship for Noblesville High School in 2014. Garrett was the starting pitcher in a 2-1 win over Terre Haute North, and Connor started at third base. The brothers said that experience was one they will remember for the rest of their lives.

“It was really special to play with Connor,” Garrett said. “We brought a ton of fans to that game. I will never forget that atmosphere.”

Because both pairs of brothers are so close in age, they butt heads repeatedly. When Connor showed he could squat more weight than his big brother, Garrett shut him down.

“I told him, ‘Just because you can squat more than me doesn’t mean you’re a better athlete,’” Garrett said.

Connor admitted he likes having that extra motivation in the weight room.

“He always pushes me to get better,” Connor said. “And that’s because I know he cares.”

The Parkers’ sibling rivalry is epitomized by one particular incident. The brothers played every sport imaginable growing up. One day, the tension escalated during a supposedly friendly game of one-on-one basketball. After Gehrig beat Zach, his little brother let him know how he felt about the loss.

“He threw the ball and left a dent in the back of our mom’s minivan,” Gehrig said.

Katie Parker, their mother, was not exactly pleased.

“We look back and laugh now, but I know I wasn’t happy at the time,” Katie said.

The brothers developed their own vernacular. When Connor and Garrett roamed the halls of Noblesville High School, they addressed their friends as “bro.” But when they saw each other, they said something different.

“I would always go up to Garrett and say, ‘What’s up, real bro?’” Connor said. “It stuck. We use #realbros when we post Instagram photos with each other.”

The Parkers also use a phrase that personifies their relationship. Gehrig describes himself as a die-hard Chicago Blackhawks fan. As he watched Blackhawks right winger Marian Hossa with a friend, they came up with a term that became a part of the Parkers’ daily vocabulary.

“‘Hoss’ is the ultimate compliment,” Gehrig said. “You use it as a noun or adjective to describe anyone who is great at their craft; a beast. ‘Legend’ is a good one too, but it’s just not the same.”

The bonds may bend, but they never break. The brothers may clash, but when the dust settles, both pairs said they want to see one another succeed. Sophomore pitcher Matthew Ryan said he admires the Parkers’ intelligence and work ethic.

Connor Christman (left) and Garrett Christman (right) wait for the next pitch during practice. Photo by Jimmy Lafakis.

“They look to see what’s in front of them first, but they put their heads down and work,” Ryan said.

Senior pitcher Jeff Schank has observed the Christman brothers mold a unique relationship on and off the field. He said Connor is motivated by one thing in particular.

“I see that he always wants to surpass Garrett,” Schank said. “Those guys compete their a—- off.”

San Francisco Giants scout Kevin Christman said he watched his two children grow into young men over the years. He said his sons have bonded in a special and private way only they can understand.

“They love and genuinely care for each other,” Kevin said. “They look out for each other in all aspects of life, and sometimes, the younger one teaches the older one a few things.”

All four brothers agreed on one thing — they will cherish the time spent at Bulldog Park with their built-in friends.

“Our bond stems from the front yard,” Zach Parker said. “It’s been a blast here so far. [Gehrig] and I don’t want to take this for granted.”