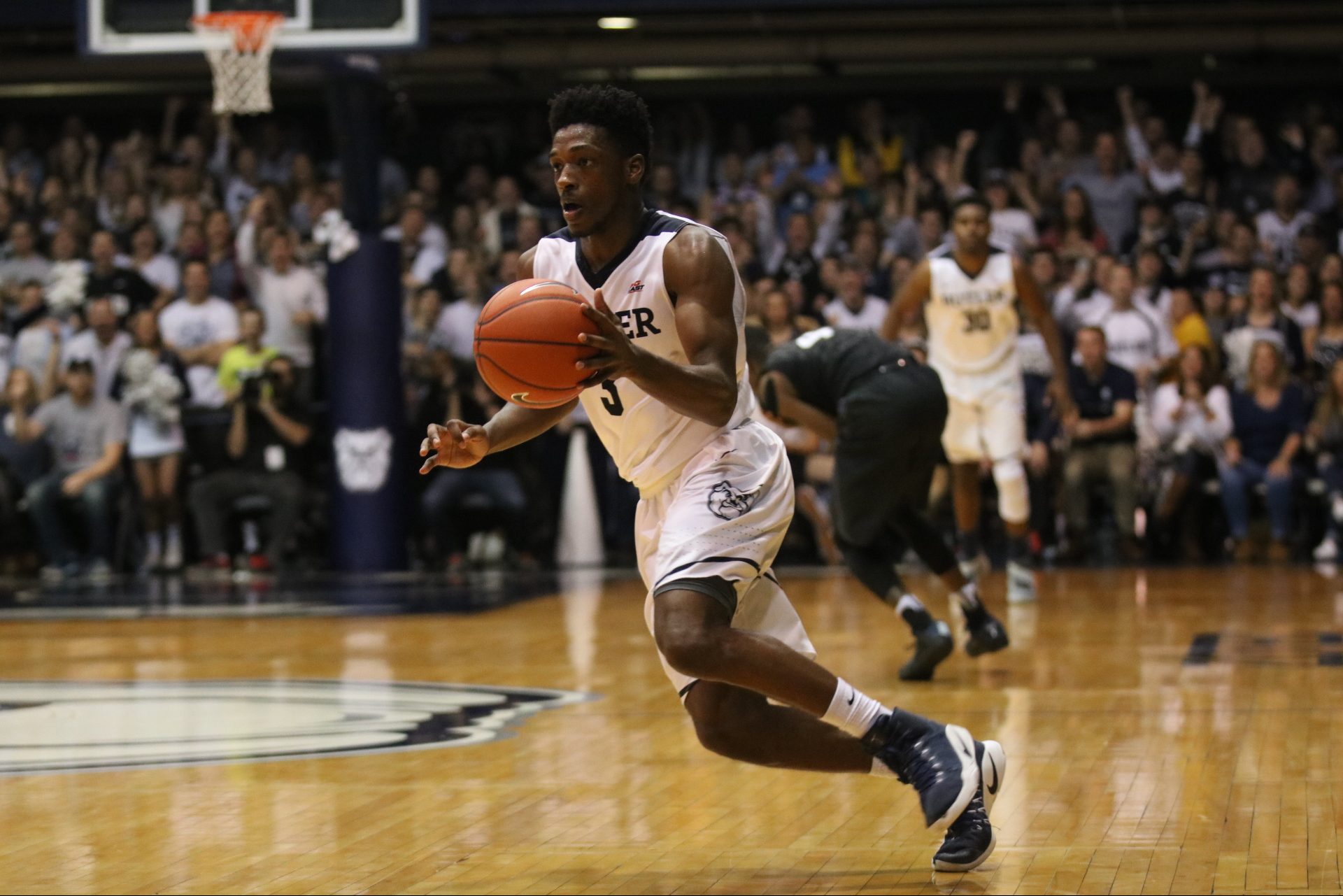 Kamar Baldwin dribbles towards the rim after stealing the inbounds pass at the end of the game. Baldwin led the team with 21 points and nine rebounds. Photo by Jimmy Lafakis.

The No. 12 Butler University men’s basketball team bounced back from their loss against the No. 8 Creighton Bluejays with a tightly contested 83-78 win over the No. 15 Xavier Musketeers in front of a sold out crowd at Hinkle Fieldhouse on Jan. 14.

After scoring just 25 points as a team in the first half, the Bulldogs (15-3, 4-2 Big East) put together a 58 point second half to seal the win. Kamar Baldwin, plenty of fouls and superb free throw shooting led to the productive second half.

Baldwin was one Bulldog who certainly attacked more in the second half. After being held scoreless in the first half, the freshman scored a team high 21 points in the last 20 minutes of play. Baldwin also led the team in rebounding with nine boards and shot a perfect 8-of-8 from the free throw line.

“He has found a rhythm with each and every game, and he has adjusted in game, which is huge for a kid his age,” senior Andrew Chrabascz said about Baldwin after the game.

Butler 83, Xavier 78. Highlights from the Bulldogs' win in a Top 15 battle in front of a sold-out Hinkle Fieldhouse crowd. pic.twitter.com/SXoZMHUpID

Chrabascz finished second on the team in scoring with 16 points; his offensive post presence was a key component for Butler. The other two Bulldogs to score in double figures were Kelan Martin (13 points) and Kethan Savage (10 points).

Between the two teams, there were 56 fouls committed, and Butler’s superior free throw shooting ability secured their victory. The Bulldogs were 33-of-38 from the charity stripe; whereas, the Musketeers were 28-of-39.

Xavier (13-4, 3-2 Big East) head coach Chris Mack said the turnover differential was crucial to the outcome of the game as well. Butler turned the ball over nine times while the Musketeers had 16 turnovers.

Similar to Baldwin, Xavier guard Edmond Sumner scored all 22 of his points in the second half. J.P. Macura was the other notable scorer with 16 points, but he also committed seven turnovers. Trevon Bluiett, Xavier’s leading scorer (17 ppg), was held to just 10 points and fouled out with 3:18 left in the second half.

The first half of play was back and forth until the Musketeers went on a 10-0 run in three minutes towards the end of the half. Xavier grew their lead to nine points and took a 31-25 lead into halftime.

With the win, Butler snapped Xavier’s four game win streak in the series and is now 2-4 against the Musketeers under Holtmann.

The Bulldogs have a quick turnaround as they welcome the Marquette Golden Eagles into Hinkle Fieldhouse on Jan. 16. The game will tip off at noon and be aired on FS1.