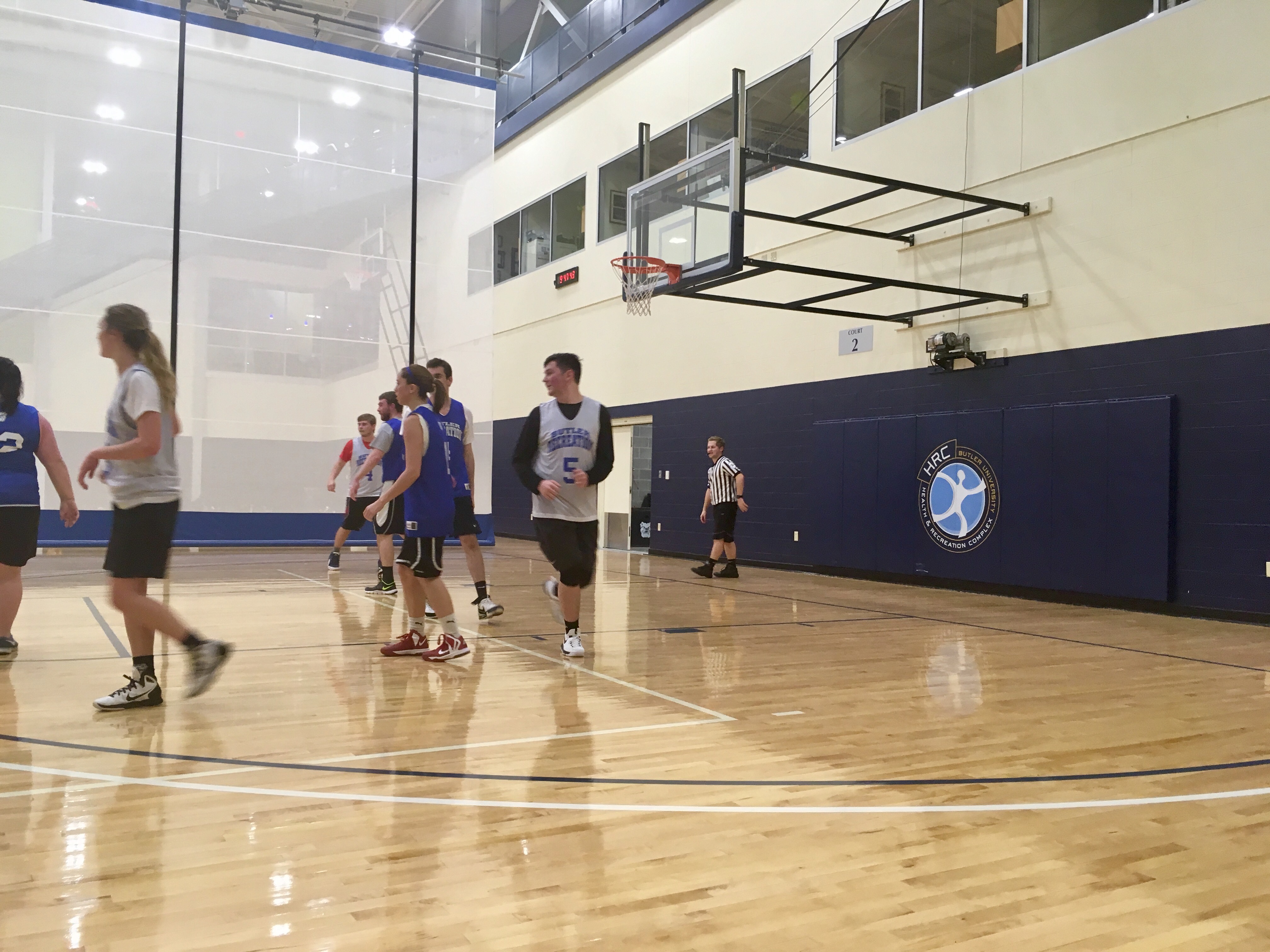 Officials in action during an intramural basketball game. Photo by Zach Horrall.

Intramural basketball is in season at Butler University. Most nights of the week, the Health and Recreation Complex buzzes with students competing against one another. However, real games need real officials.

Compared to other intramural sports, basketball receives the most attention. There are 12 co-rec teams, 34 men’s teams and four women’s teams.

Not only does it have high amounts of participation, but it also is the most competitive and aggressive. Sometimes, officials have to deal with behavioral issues.

“It is what it is, and that’s what can make intramurals fun,” said Michael Faust, junior intramural basketball supervisor and official. “You can go play pickup basketball any day, but a lot of the people come because it is a place where you can play safely competitive.”

Faust said officiating is not always easy. He recalls calling a technical foul on a coach during the championship game of the men’s basketball intramural league last year.

“He yelled something with an explicit in there, and that was the way it went,” Faust said. “That’s our policy in intramurals, as soon as you begin disrespecting an official, it’s going to be a technical foul.”

While some officials like Faust have been an official before, new official Valentina Centeno has never played basketball before. Coming to Butler as an international student from the University of San Francisco de Quito in Ecuador, she not only has she had to learn the sport but also be able to understand the rules as an official.

Centeno did not just jump onto the floor with a whistle and striped-shirt. She, like all Butler intramural officials, went through training to prepare for the season. This training included hours learning the rules and mechanics of officiating. Also, they learn to operate the scorebook and clock. The officials have a meeting every Friday to discuss how to improve over the season.

“The process is kind of tough,” she said. “English is not my native language, so it is hard.”

While some officials begin just to get involved with the sport, they are led by intramural sport coordinators. These coordinators officiate and teach their younger counterparts the ways of the game. They have past experience and were all first year officials at one point.

Officials learn about more than basketball. Faust said they learn valuable life skills that help them outside of officiating.

“You learn that there are more languages to communicate with,” he said. “Knowing that you can be a shy person and officiate was one of the most comforting things for me.”

Centeno played intramural volleyball earlier this year, which attracted her to become a basketball official. However, Centeno did not expect basketball to be as competitive as it is.

“I thought it was just going to be normal,” Centeno said. “Then I realized people here take basketball very seriously, which makes my job more difficult.”

Faust saw an opportunity to make some extra money by becoming an official and now plays a leadership role within the department of recreation.

“Working for the department has been really, really fun,” he said. “To work in that environment and have fun in athletics, that is a huge thing that keeps me around.”

Though the game can get intense, most participants know the officials are their age and can make mistakes. Junior Eric Gentry plays with several of his brothers from the Delta Tau Delta fraternity. He admits he is competitive but realizes the officials’ calls will not drastically affect the game.

“Officiating is never easy,” he said. “There is always a lot of gray area. If they make certain calls, you just have to adjust the way you play.”

Inside the game, Faust said most people do not recognize that they are not full-time officials. But off the court, Faust has been approached by participants who realize they are humans and will make mistakes.

Centeno has only officiated one game so far. She said she enjoyed learning so much about the sport.

“I think most people are here to have fun,” Centeno said. “So far, it’s been good.”

The intramural basketball season began on Jan. 22 and runs throughout February. The championship games for each league are held in Hinkle Fieldhouse.